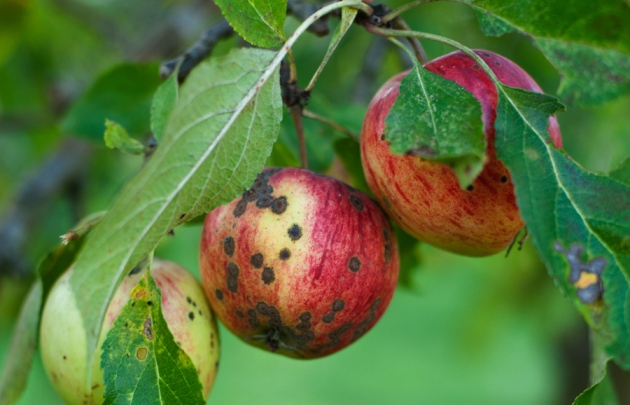 Apple scab is one of several crop diseases that researchers want to beat with genetic engineering.

It took scientists 85 years to breed a commercial apple that could fend off apple scab, a devastating disease caused by the fungus Venturia inaequalis. In 1999, they finally produced a tasty variety that contained the Vf defence gene, bred in from an unappetizing relative. Instead of dousing orchards with fungicides 30 times a season, farmers could spray the resistant crop just twice.

But five years later, V. inaequalis had evolved and apples trees were becoming infected again. Breeders were back to square one. Even armed with modern breeding techniques and 15 known defence genes in the apple family, it would take another 40 years to breed a resistant strain conventionally, says Henk Schouten, a plant scientist at Wageningen University in the Netherlands.

So instead, Schouten has joined a small but growing pool of academics and companies hoping to taking advantage of the latest approaches in genetic engineering, while avoiding the lengthy and expensive burden of government regulation. Because he wants to insert DNA only from related apple varieties, Schouten argues that his product should not be regulated in the same way as genetically modified (GM) crops that are engineered with bacterial or viral DNA. Other pioneers argue that the techniques they are using to modify plants are safer than old technologies, and therefore do not need regulation. In some cases, US regulators have agreed.

Since 2010, the US Department of Agricul­ture has told at least 10 groups that their GM products would not require regulation (see ‘ Cropping out regulation’) — removing a substantial financial barrier and speeding up development. That has encouraged academic labs and small companies to pursue speciality crops, such as apples, that have so far been ignored by biotechnology giants.

“There are any number of companies exploring new techniques to produce crops that don’t trigger regulatory oversight,” says Scott Thenell, managing director of Thenell & Associates, a consulting firm in Walnut Creek, California, that helps researchers to navigate GM-plant regulations. “And often, they are small or niche crops that can’t support the escalating costs of regulatory approval.”

The regulation of GM crops in the United States is based on laws that were not tailor-made for the technology. The Animal and Plant Health Inspection Service (APHIS), the branch of the agriculture department responsible for overseeing GM crops, has so far stuck to a strict interpretation of a 1957 law designed to protect agriculture against plant pests that was co-opted in 1986 to regulate GM crops. At that time, GM crops were nearly always engineered using Agrobacterium tumefaciens, a bacterial pest that can insert DNA into plant genomes.

In 2011, APHIS regulators announced that a herbicide-tolerant Kentucky bluegrass would not fall under their purview, because the lawn-and-garden company developing it did not use Agrobacterium or any other plant-pest DNA to engineer the grass. The company, Scotts Miracle-Gro of Marysville, Ohio, instead used a gene gun to fire DNA-coated gold particles into plant cells. Some of that DNA is then incorporated into the genome.

For Greg Jaffe, director of biotechnology at the Center for Science in the Public Interest, a consumer advocacy group in Washington DC, the news highlighted the shortcomings of the US regulatory system for GM crops. “The whole system is a fiction,” he says.

And some are starting to test the regulation-free waters. Scotts Miracle-Gro, for its part, has said that its bluegrass was not meant to be commercialized, and was just a test case to see how APHIS would respond. That is not the case for other groups that have been told that their GM products would not be regulated. Some include academic researchers, who are eager to avoid field-trial permits and special containment measures, and who want to encourage corporate development of niche crops.

Dennis Gray, a developmental biologist at the University of Florida in Apopka, is trying to use genes from grape varieties to engineer a wine grape that is resistant to Pierce’s disease — a condition caused by a bacterium that has made it difficult to grow wine grapes in the state. He says that the lack of regulation is encouraging researchers like him to pursue such small-market crops. “Little agricultural labs just don’t have access to the infrastructure and the money needed to move these forward.”

Other emerging approaches may also escape regulation. Sally Mackenzie, a plant biologist at the University of Nebraska–Lincoln, contacted APHIS about the high-yield offspring of a transgenic sorghum grass plant — even though these offspring no longer contain the engineered gene. Mackenzie thinks that the transgene triggered an epigenetic change: it altered the plant’s gene expression by changing the pattern of chemical groups added to its DNA rather than changing the DNA sequence itself. In 2012, APHIS regulators invited Mackenzie to the organization’s headquarters in Riverdale, Maryland, and questioned her about this hypothesis. APHIS eventually notified her that it would not regulate her plants — a decision that Mackenzie says has accelerated her research and may allow her to launch a company to develop her grass variety.

Agricultural giants Monsanto, based in St Louis, Missouri, and Syngenta, headquartered in Basel, Switzerland, are vying to license the technology. “The first thing they asked me was, ‘Have you been through APHIS?’” says Mackenzie.

Other companies are gauging their prospects with different DNA-modification tools, such as zinc-finger nucleases — enzymes that precisely target a region of the plant genome. In 2010, APHIS told Dow AgroSciences of Indianapolis, Indiana, that it would not regulate a herbicide-tolerant maize (corn) made using zinc-finger nucleases. Dow spokesman Garry Hamlin says that the company has since dropped the maize project, but is working with outside researchers to develop other crops using similar technology.

Jennifer Kuzma, a policy analyst at North Carolina State University in Raleigh, says that a lack of regulation for the latest approaches could fuel public suspicions about GM crops. “One could argue that the technologies are more targeted and you’re doing things in a smarter way,” she says. “The flip side is that they are so powerful you can engineer multiple genes at one time.”

Not all companies are embracing the potential for freedom from regulation. Oliver Peoples, chief scientific officer at Metabolix, a plant-engineering company in Cambridge, Massachusetts, says that he would rather be regulated by APHIS to earn the public’s trust. He notes that Agrobacterium inserts genes more efficiently than the gene-gun method. Although zinc-fingers are appealing for their specificity and their ability to escape regulation, companies do not yet have much experience in working with the technique, or navigating the patents needed to use it.

Schouten, meanwhile, did not skirt regulation for his apples after all. In April 2012, APHIS told him that the agency would regulate his variety in spite of the fact that the genes he introduced came from other apples. This was because he used Agrobacterium to insert the genes — it did not matter to regulators that no trace of Agrobacterium DNA remained in his plants.

Schouten is perplexed. If he had used a gene gun, he would have inserted DNA haphazardly and in a manner more likely to damage other sites in the genome — yet this remains the unregulated method. “To me, this is a very strange system,” he says.