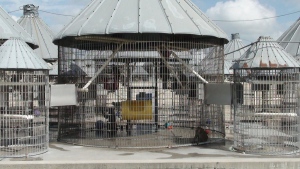 The New Iberia Research Center in Louisiana is under investigation by the US Department of Agriculture over the deaths of several monkeys.

A major US primate research centre supported by the National Institutes of Health (NIH) is under investigation by government regulators for an incident last year in which the decomposing bodies of three macaques were found trapped in a metal chute connecting two outdoor cages (see picture, right).

The probe at the New Iberia Research Center (NIRC), part of the University of Louisiana at Lafayette, is being conducted by the US Department of Agriculture (USDA), which enforces the Animal Welfare Act. It was made public today by Stop Animal Exploitation NOW! (SAEN), an activist group based in Milford, Ohio, which obtained documentation of the investigation under the US Freedom of Information Act. The group also filed a formal complaint to the USDA today. Apart from the deaths of the three monkeys trapped in the chute in May 2011, this lists 9 deaths due to ”traumatic injuries” between May 2010 and July 2011. Details of the deaths, many of infants and young animals, were gleaned from animal veterinary records obtained under the Freedom of Information Act.

Michael Budkie, executive director of SAEN, says: “If the ULL/New Iberia facility staff are not capable of preventing injuries due to trauma, or in the case of the three monkeys who died in the transfer chute, of even keeping track of where the animals are, maybe they are not capable of caring for the 7,000 primates currently in their facility.” He adds: “This lab should be severely punished.”

Thomas Rowell, director of the NIRC, responds that “the death rate is unremarkable ... relative to the total population.” The NIRC housed 6,857 primates as of 26 March, so the nine animals account for 0.13% of its population. Rowell noted that SAEN and other activist groups have raised similar complaints in the past that were not borne out. He provided to Nature a November 2011 USDA inspection report that he says was prompted by a SAEN complaint. It found the NIRC in compliance with animal welfare law.

As for the deaths of the macaques in the chute on 26 May 2011, Rowell says “it was a tragic accident,” but an isolated one, which occurred when doors on both ends of the chute were inadvertently closed. “The people that were involved in the accident were held accountable. And I'm sure in the end that the centre will be held accountable by the USDA,” he says. He says that he cannot discuss details of the disciplinary actions taken against the responsible employees, under University of Louisiana policy.

Rowell reported the deaths to the USDA on the day that the bodies were discovered, prompting the investigation. He added that the centre has instituted new procedures, including daily animal inventories.

SAEN also announced today the existence of another USDA investigation that touches indirectly on the NIRC. The department is probing an incident last year in which a chimpanzee died in a truck in transit to the Louisana centre. The 8-year-old male was being moved from BIOQUAL, a contract laboratory in Rockville, Maryland, that houses juvenile chimpanzees for studies, mainly on hepatitis C virus and vaccine development, conducted by the National Institute of Allergy and Infectious Diseases in Bethesda. BIOQUAL and the trucking company are under investigation. The NIH said it could not comment on an open investigation, and Rowell referred questions about the chimpanzee's death to BIOQUAL.

The company's chief executive, John Landon, says that the animal was healthy when it was put on the truck in May 2011, and that beyond that point its welfare was the responsibility of the government, which hired the trucking firm. The trucking company, Stone Oak Farms and Transports, in Opelousas, Louisiana, did not reply to Nature's requests for comment.

The USDA does not comment on open investigations, which can lead to penalties of US$10,000 per infraction. Probes are started when routine inspections document “things that are serious,” says David Sacks, a department spokesman. Once an investigation is launched, he says, “they are going to be turning over every rock.”

In determining the severity of a penalty if a violation of animal welfare law is found, the USDA considers, among several factors, the facility’s former history of penalties. In 2009, the NIRC paid a settlement of $18,000 to the department, without admitting wrongdoing, after an undercover agent for the Humane Society of the United States filmed animals being mistreated there.

In the current case, says Gregory Kaebnick, a bioethicist working on animal research ethics at the Hastings Center in Garrison, New York: “USDA is taking the right steps. While it remains the goal to try to limit animal deaths, I would want to await the results of the investigation before condemning NIRC.”