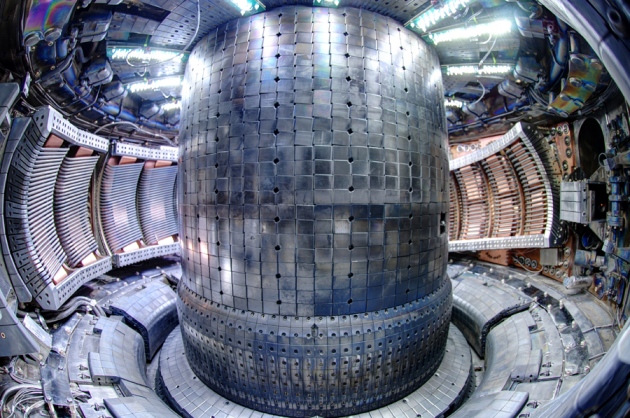 A fusion-physics advisory panel recommends closure of the Alcator C-Mod experiment at the Massachusetts Institute of Technology.

As the international ITER project to build an experimental nuclear fusion reactor in Cadarache, France, eats into research budgets around the world, an advisory panel to the US Department of Energy recommends mothballing at least one of three major experiments and focusing on the research necessary to bring ITER online.

The Fusion Energy Sciences Advisory Committee released its report on 22 September at a meeting in Gaithersburg, Maryland. The document outlines a 10-year plan for US nuclear-fusion research in various budget scenarios, the most optimistic of which calls for “modest growth”.

Nuclear fusion offers the potential for producing nearly limitless energy by smashing heavy atoms of hydrogen into helium inside a plasma burning at 100 million kelvin, and capturing the energy released by the reaction — but scientific and engineering challenges remain.

The report says the United States should focus research initiatives on ITER’s design, in which a device called a tokamak holds the plasma in the shape of a donut. Major challenges to using the design include how to control the writhing plasma at the reactor’s core, and understanding how it interacts with surrounding material to engineer walls that can maintain the reaction.

To free up money, the report recommends ceasing operations at the Alcator C-Mod reactor at the Massachusetts Institute of Technology (MIT) in Cambridge starting in 2015. Congress cut that facility's funding in 2012, but efforts from Massachusetts lawmakers allowed it to resume operations this year. In some of its budget scenarios, the panel suggests that one other US fusion facility — either the DIII-D operated by the defence firm General Atomics in San Diego, California, or the National Spherical Torus Experiment in Princeton, New Jersey — could also face the chopping block some time between 2020 and 2025.

The panel recommends construction of a linear system to simulate tokamak conditions, as well as beefing up an existing neutron irradiation source — such as one at Oak Ridge National Laboratory in Tennessee.

The report describes a future that includes an extensive nuclear-fusion research programme centred around a national facility, but this would require increased funding.

The committee was not allowed to reconsider the US commitment to ITER, the international attempt to build an experimental fusion reactor. With construction soaring in cost to US$50 billion — ten times the original figure — and falling 11 years behind schedule, ITER is the most expensive scientific experiment in history. Its woes have attracted widespread criticism and eaten into research budgets for other fusion experiments around the world.

Some researchers found the report uninspired. “The scale and cost of ITER should give the US community pause,” says Stephen Dean, head of Fusion Power Associates, an advocacy group in Gaithersburg. “There's no evidence in here of a recognition that maybe we ought to try to look for something better,” he says.

Others question the closure of MIT’s Alcator C-Mod. “I think there are good reasons for having C-Mod run several more years,” said Dale Smith, former director of the fusion programme at Argonne National Laboratory in Illinois.

Although it is the smallest of the three major US facilities, C-Mod specializes in studying the boundary between the plasma and its reactor walls — one of the 'highest-priority' research initiatives identified in the report. “We’re kind of at a loss” to explain the discrepancy, said Martin Greenwald, the associate director of MIT’s Plasma Science and Fusion Center. The report is “pretty close” to a death blow for the facility, he said, but he held out hope that the scientific community might rally to its aid.