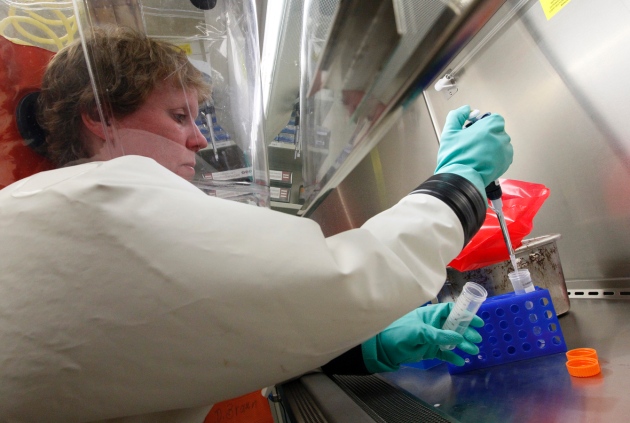 Research on lethal pathogens must be done in a controlled environment.

Manipulating a virus to make it more deadly or transmissible can help scientists to answer important questions about how the microbe evolved or how to kill it. But it is tricky to determine when the risk of accidentally releasing such a pathogen outweighs the benefits of this 'gain-of-function' research.

On 28 September, analysts hired by the US government revealed how they will model these risks mathematically — information that the government will consider as it determines whether to extend a year-long ban on federal funding for gain-of-function studies.

The model will enable policy-makers to determine the likelihood of a modified virus escaping a high-security laboratory and causing an outbreak. It will do so by analysing factors such as the type of airflow in a lab and the demographics of the area in which it is located. Analysts with the consulting group Gryphon Scientific in Takoma Park, Maryland, will deliver their final report to the US National Science Advisory Board for Biosecurity (NSABB) in November. The NSABB will then issue its final recommendations on gain-of-function research to the federal government in early 2016.

In October 2014, the White House abruptly suspended new federal funding for research that would increase the lethality or transmissibility of influenza, severe acute respiratory syndrome (SARS) or Middle East respiratory syndrome (MERS). But the effect was probably even larger — research institutions were also encouraged to reassess ongoing pathogen studies, whether or not they were funded by the government or fell under the strict definition of gain-of-function work.

Upon issuing the suspension, the White House also asked the NSABB to determine whether research should resume and, if so, under what conditions. The board then hired Gryphon, at a cost of US$1.2 million, to study the risk of a release.

Rocco Casagrande, Gryphon's managing director, says that his team has patterned its model after risk assessments done for the nuclear industry or at chemical plants. The company's analysis draws on a wide range of data, such as records of historical lab accidents and security breaches, published literature on virus biology and epidemiology and the firm’s own visits to labs and interviews with researchers.

Gryphon used this information to build risk-assessment models that incorporate variables such as whether researchers are using gloves that would protect them from being bitten by infected lab animals, the availability of antiviral medications for a given virus and meteorological conditions that could affect how an aerosolized virus spreads.

The team can add or substract variables to the model to mimic conditions in a real lab or assess the statistical likelihood that eliminating or changing a feature will substantially affect risk.

The models also provide a way to understand the risks of making specific modifications to a virus. A virus that is enhanced to be about as transmissible as seasonal flu, for instance, has about a 50% probabiliy of starting a global pandemic if it escapes the lab and starts a local outbreak.

The Gryphon team is also examining the state of gain-of-function research in the United States and how this might change in the future. The researchers estimate that about 40 US labs have the interest and ability to carry out such studies, and that more of these would likely begin working in this area if the White House were to lift its funding ban. Crucially, Gryphon is also attempting to quantify the benefits of this research — projecting how many lives could be saved if doing gain-of-function research sped up the development of a crucial vaccine during a pandemic, for instance — and the whether maintaining the current moratorium hampers scientific progress.

How to balance the books

Casagrande says that the benefits of this type of research are hard to calculate, as it is impossible to know where basic research may lead. But determining whether these studies should continue is the NSABB's job, he says: “We give them the markers of when to worry, and they decide what to worry about.”

But some doubt the utility of such an approach. “I have always said that the quantitative risk–benefit analysis is a dead-end street,” says Ron Fouchier, a virologist at Rotterdam's Erasmus Medical Center in the Netherlands. In 2012, he and his colleagues published a study1 of an enhanced avian influenza A/H5N1 virus, which sparked controversy2. “Even if they could be quantified, the weighing of risks and benefits will be a personal (subjective) issue.”

Susan Wolf, a law and bioethics researcher at the University of Minnesota in Minneapolis and a member of the NSABB , agrees that such an analysis cannot be the final word. “Are some risks simply unacceptable, even if there are countervailing benefits?” she says. Although the NSABB’s recommendations will only affect the United States, she would like to see a global policy discussion, as a disease outbreak could spread internationally.

Drew Endy, a synthetic biologist at Stanford University in California and an NSABB member, adds that creating a culture of safe lab practices and oversight is at least as important as implementing quantifiable factors such as physical barriers.

“While it’s nice to have an accounting of how many labs that can do this at a particular level exist, we have to consider that to be a dynamic number, in part because of investments and in part because the world changes,” Endy says. What is important, he adds, is whether people choose to perform gain-of-function research and how they choose to do it.