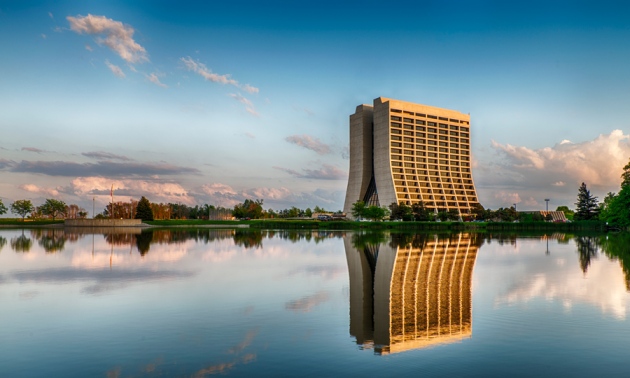 Wilson Hall is the main administrative building at Fermilab, where the Tevatron, the United States' flagship particle accelerator, shut down in 2011.

Faced with tightening budgets, US high-energy physicists have set out a research agenda for the coming decade that relies more heavily than ever on international collaboration.

The proposals come in a report released today by the Particle Physics Project Prioritization Panel (P5), part of the US Department of Energy’s high-energy physics advisory group. The P5 report emphasizes the need for the United States to remain a key player in future developments at the Large Hadron Collider (LHC) at CERN, Europe’s particle-physics centre near Geneva, Switzerland. It also highlights the need to support global ambitions to build an LHC successor known as the International Linear Collider.

Significantly, it recommends reshaping a proposed neutrino facility at the Fermi National Accelerator Laboratory (Fermilab) in Batavia, Illinois, as an internationally funded effort. “That’s a major change,” says Andrew Lankford, a physicist at the University of California, Irvine, who chairs the advisory group and helped to draft today's report. Building stronger international links is a necessity, given constrained funding, he adds, but it should also benefit science. “Sharing projects means that different nations can accomplish more than they could individually.”

The landscape of high-energy physics has changed considerably since the most recent P5 report in 2008. In 2011, Fermilab closed its Tevatron particle accelerator, long the flagship of US particle physics. The following year, the more-powerful LHC achieved what had been one of the Tevatron's main goals — discovering the Higgs boson.

But smashing particles together at ever-higher energies is not the only way to explore the frontiers of physics. In 2008, the P5 recommended that the United States focus instead on the ‘intensity frontier’. By packing more particles into a beam, physicists hope to make very rare interactions — such as those involving neutrinos — show up more often.

The latest P5 report continues that theme. To establish the United States as a world leader in neutrino physics, it calls for investment in the Long Baseline Neutrino Facility (LBNF) at Fermilab, which could be ready for experiments by 2022. The facility would fire high-intensity neutrino beams more than 1,200 kilometres through Earth's mantle to a detector at the Sanford Underground Research Facility in South Dakota.

Neutrinos can oscillate between three different types, a behaviour that implies that they have a tiny amount of mass. Studying neutrino beams could pin down the origins of that mass and how the oscillation occurs, potentially offering clues about why the Universe came to be dominated by matter rather than antimatter.

Europe’s current particle-physics strategy, released last year, suggests that there would be enthusiasm for an international neutrino collaboration similar to the LBNF. “If they want to pick up that baton, that’s great,” says Jonathan Butterworth, a high-energy physicist at University College London, who was the UK representative on the European strategy panel. “Internationalizing is not a sign of weakness, it's a sign of strength.”

P5 also backs Fermilab’s proposed Mu2e experiment, which would create an intense beam of muons, a heavier cousin of the electron. Mu2e aims to glimpse the occasional decay of a muon into an electron, which is predicted by some forms of supersymmetry: a theory that could be a successor to the current standard model of particle physics.

And the report prioritizes a new generation of experiments to detect and characterize dark matter, an unseen material that seems to bind galaxies together. Overall, these efforts would increase the proportion of the high-energy physics budget spent on building new facilities — which will probably lead to cuts elsewhere, including in personnel, says Lankford.

But US President Barack Obama’s budget request for 2015, released in March, proposed a 6.8% cut to the Department of Energy’s high-energy physics budget, down to US$744 million.

Lankford concedes that that is worse than the P5's worst-case scenario. Unless Congress votes to increase the budget, it leaves high-energy physics in a precarious situation, he says. The budget would rule out building a planned Dark Energy Spectroscopic Instrument, intended to map galaxies and quasars to measure the expansion of the Universe. It would also delay some other big-ticket items. The report’s authors predict that under a low-funding regime, the United States risks losing its status as a global leader in the high-energy physics. “They urgently need to get a big facility going,” agrees Butterworth.

Lankford is optimistic that the Department of Energy will use the report to shape its funding programme, giving the panel’s message more credibility in future budget debates. And he points out that in the 2014 budget, Congress did offer more funding for high-energy physics than the president had requested. Lankford fervently hopes that they will do so again this year.