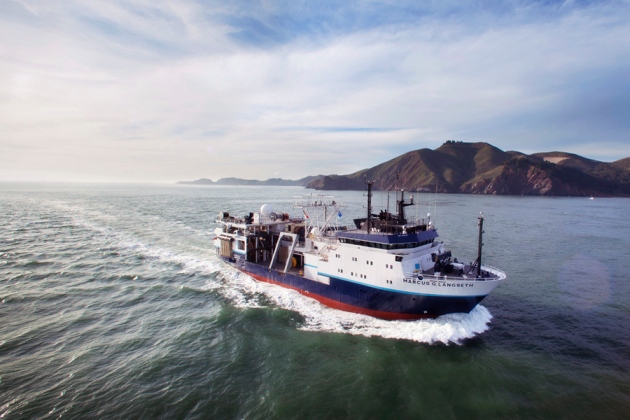 The US National Science Foundation should cut spending on research ships by 5%, a new report says.

Faced with rising costs of going to sea, the ocean-sciences division of the US National Science Foundation (NSF) should immediately slash what it spends on marine hardware, says a new report. It suggests making the biggest cut to the flagship US$386-million Ocean Observatories Initiative (OOI), which after years of construction is just months away from being finished.

The report, released on 23 January by the US National Research Council, is likely to guide US oceanography for years to come. It is the first formal attempt to address what many researchers have grumbled about for years — that basic ocean science at the NSF is losing out to the rising costs of infrastructure.

To get science funding back to its historical level, the report’s authors suggest slashing 20% of the OOI’s operations budget, and making smaller cuts to the NSF contributions to the scientific ocean-drilling programme and the US academic research fleet. If the agency takes that advice, it could free up enough money for US oceanographers to begin to reclaim much of their lost science, as well as expand partnerships with international researchers.

“It’s an exciting time to be in ocean science,” says Shirley Pomponi, an oceanographer at Florida Atlantic University in Fort Pierce and co-chair of the report committee. “But we need to take steps to make that better.”

US oceanography has been in trouble for a while. The US Navy paid for the bulk of the country’s academic oceanographic work until the 1960s, after which the NSF began shouldering more of the burden. Even as filmmaker James Cameron, flush with private money, explored the Pacific Ocean's Mariana Trench with a handful of scientists in 2012, most research oceanographers found themselves with fewer ways to get to sea.

Over the past decade, the NSF’s ocean infrastructure expenses rose 18% as the ocean-science division’s inflation-adjusted budget dropped by more than 10%, to just under $350 million annually. In 2013, the division started spending more on infrastructure than it did on science. That is when the NSF asked for outside advice on how to cope.

The report lays out eight science priorities for the next decade, including sea-level change, marine biodiversity, earthquakes and tsunamis, and life beneath the sea floor. Unusually, it also suggests how to pay for the studies — a 10% cut in infrastructure immediately, spread unequally among three programmes, followed by a similar or larger cut over the next five to 10 years. “This document gives them the flexibility to make some really hard decisions,” says Samantha Joye, an oceanographer at the University of Georgia in Athens.

The smallest suggested cut, just 5%, applies to the NSF contribution to the 20-vessel research fleet, because ships enable more of the future science priorities. Even so, the report recommends that the agency build no more than two new ‘regional class’ vessels in the coming years; it had been considering building three.

The middle cut, of 10%, is recommended for the scientific ocean-drilling programme — in the guise of the JOIDES Resolution drillship, which has already endured a number of cutbacks.

Finally, Pomponi and her colleagues suggest that 20% should be cut from the OOI's operations budget, which will run between $55 million and $59 million when it begins full operations this year. They note that the OOI is made of many components, some of which do a better job than others at studying the key science priorities.

For instance, a cabled sea-floor observatory off the coast of Oregon addresses the risks of underwater earthquakes and tsunamis. Two moveable arrays of instrumented moorings — one off the US east coast and one off the west coast — tackle questions such as regional sea-level change. But four deep-water sites — two at high northern latitudes and two in the far south — are much less crucial for the eight priorities, says the report. It argues that at least one of the southern sites could be sacrificed without much scientific loss, while others may need only to be instrumented for two or three years to understand ocean change rather than the 25-year planned lifetime of the OOI.

“We didn’t say the OOI was not important,” says report co-author Melbourne Briscoe, an oceanographer who has previously worked for the government and now runs an environmental consulting company in Alexandria, Virginia. “It’s just that it wasn’t as relevant to that set of eight questions as other pieces of infrastructure were.”

Officials of the Consortium for Ocean Leadership, the Washington, DC-based organization that is building the OOI for the NSF, declined to comment, saying that they needed more time to digest the report and its implications.

Richard Murray, who became director of NSF's ocean sciences division this month, says that his top priority is to figure out how to move forward with the new community advice. "We're looking at this report very, very seriously," he says. "We hear very clearly the committee's recommendation that something needs to be done."

Mitchell Lyle, an oceanographer with Oregon State University in Corvallis who was not involved in the report, says that the field needs to stop quibbling over how to spend ever-smaller slices of the budgetary pie, and instead take a fresh look at what US oceanography can really afford. "Funding levels are now dropping below a sustainable level to support the number of ocean scientists that we now have," he says. Oceanographers might be better served by looking at more dramatic options for saving federal research dollars, he says, such as possibly closing some of the current oceanographic institutions.