Research from the US Geological Survey (USGS) shows that sea levels are rising much faster between North Carolina and Massachusetts than anywhere else in the world. The news comes less than two weeks after North Carolina's Senate passed a bill banning state agencies from reporting predictions of increasing rates of sea-level rise.

Asbury Sallenger, an oceanographer at the USGS in St Petersburg, Florida, and his colleagues published their report today in Nature Climate Change1. They analysed tide-gauge records from around North America from between 1950 and 2009, and found that the rates of sea-level rise along the northern half of the eastern seaboard — from Cape Hatteras, North Carolina, to Boston, Massachusetts — are increasing three to four times faster than rates of sea-level rise globally. 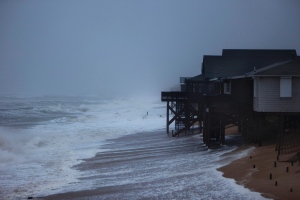 Seas in North Carolina are rising faster than in most of the rest of the world.

The existence of the hotspot is consistent with the measured slowing of Atlantic Ocean circulation, which may be tied to changes in water temperature, salinity and density in the subpolar north of the ocean.

The researchers predicted that by 2100, sea levels in the hotspot would rise by between 20 and 29 centimetres above the global increase, which most oceanographers predict will be about one metre.

"Many people mistakenly think that the rate of sea-level rise is the same everywhere as glaciers and ice caps melt,” said Marcia McNutt, director of the USGS. However, regional variations in temperature, water salinity and air pressure can cause rates of increase to differ considerably, as can ocean currents and land movements.

Holding back the tide

The sea-level-rise law proposed by North Carolina senators would have banned researchers in state agencies from using exponential extrapolation to predict sea-level rise, requiring instead that they stick to linear projections based on historical data.

Following international opprobrium, the state House of Representatives rejected the bill on Tuesday. However, a compromise between the House and the Senate will see a three-to-four-year moratorium on exponential analysis while the state conducts a new study on sea levels.

According to the local media, the bill was the handiwork of industry lobbyists and coastal municipalities who feared that investors and property developers would be scared off by predictions of high sea-level rises.

The core of the lobbying campaign lay in the promotion of a single paper published in the Journal of Coastal Research last year2 by James Houston, retired director of the US Army Corps of Engineers’ research centre in Vicksburg, Mississippi, and Robert Dean, emeritus professor of coastal engineering at the University of Florida in Gainesville, who reported that global sea-level rise has slowed since 1930. The article has been seized on by conservative climate sceptics around the world, and the authors have toured US climate-sceptic conferences.

Speaking to Nature, Dean accused the oceanographic community of ideological bias. “In the United States, there is an overemphasis on unrealistically high sea-level rise,” he said. “That is the position of most of the scientists investigating this topic. And the reason is budgets. I am retired, so I have the freedom to report what I find without any bias or need to chase funding.”

Sallenger and his team have been conducting their research since long before the North Carolina legal controversy flared up, but their paper specifically targets Houston and Dean’s research. It says that Huston and Dean's data sets encompass multiple time periods, causing three-quarters of their data to be biased towards masking the acceleration of sea-level rise in the northeast hotspot.

Sallenger would rather focus on his science than make any comment about politics. “We do science at the USGS that is relevant to policy, but we don’t make policy. That’s for the state legislature,” he says. “There are caveats in all of this, but our work suggests it would not be correct to project future rises using a linear interpretation.”

North Carolina is not the only ‘hotspot’ for efforts by conservatives to legislate away the reality of sea-level rise. In 2011, the Texas Commission on Environmental Quality removed all references to rising sea levels from a scientific study of Galveston Bay, and two weeks ago, the Virginia General Assembly passed a bill commissioning a study on rising sea levels only once references to sea-level rise and climate change had been removed.