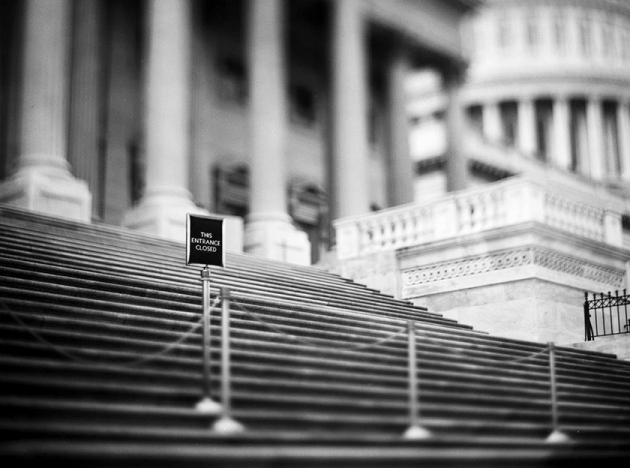 The deadlocked US Congress has been one of the least productive in modern history.

When US voters head to the polls on 4 November, they are poised to set in motion a major political shift that promises to intensify partisan strife over issues such as climate change, immigration and research funding. For the first time since 2006, Republicans are likely to win full control of the US Congress — having seized the House of Representatives in 2010, they are now predicted to take control of the Senate.

The development seems inauspicious for US researchers who depend on government funding. Prominent Republicans have repeatedly questioned the veracity of biological evolution and human-induced climate change, and party leaders’ push for drastic spending cuts has resulted in across-the-board reductions known as sequestration, which slashed 5.1% from science agencies’ budgets in 2013.

Yet in fact, the changing balance of power is expected to have little practical impact — because Congress may not be able to do much of anything. Experts see little hope of breaking the political gridlock that has made the current Congress, which began in January 2013, arguably the least productive in modern history. “It doesn’t matter what happens to the Senate,” says Michael Lubell, director of public affairs for the American Physical Society in Washington DC. “The outcome is going to be the same.”

Although Republicans already hold a commanding advantage in the House of Representatives, they are expected to win only a simple majority in the 100-member Senate, not the three-fifths majority that generally enables a party to pursue its legislative agenda without drawing any minority-party support.

That is a double-edged sword. Congress is unlikely to approve large increases in funding. But Republicans will have a hard time pushing through bills to enact the more extreme parts of their agenda — such as blocking new federal regulations to cut carbon emissions, or a plan to require the National Science Foundation to certify that all of its grants serve the ‘national interest’. (That proposal, from the House science committee chairman Lamar Smith (Republican, Texas) is targeted mostly at funding for research in the social and behavioural sciences.) And even if such legislation were approved by the House and Senate, President Barack Obama would almost certainly exercise his veto power.

Relations are so bad between the two major parties that even the US pledge to help stop the Ebola outbreak in West Africa has sparked bickering. Earlier this month, Senator James Inhofe (Republican, Oklahoma) and several high-ranking Republicans in the House temporarily blocked Obama’s request for US$750 million to send military personnel and other resources to the outbreak zone.

Funding for many science agencies did rise slightly overall in the 2014 fiscal year after the mandatory sequestration in 2013. The National Oceanic and Atmospheric Administration’s budget actually rose by roughly $575 million in 2014, to $5.3 billion. But the National Institutes of Health (NIH), the world’s largest biomedical-research funder, received $29.9 billion, less than its pre-sequester budget of $30.7 billion.

“Everybody in Congress knows that science is important,” says Congressman Rush Holt (Democrat, New Jersey), “but they don’t have much appreciation of what it takes to sustain it.” (Physicist Holt, one of the few scientists in US public office, famously gives out bumper stickers that read, “My Congressman IS a Rocket Scientist!”)

The NIH cuts have put the squeeze on many research institutions. At the Washington University School of Medicine in St Louis, Missouri, for example, federal grant funding fell by 14% from fiscal year 2012 to 2013, and by another 3% from 2013 to 2014. “Part of it was sequestration, part of it was the timing of some big grants expiring,” says Jennifer Lodge, the university’s vice-chancellor for research. “It sort of reeks of an atmosphere of gloom around funding.”

The story is similar at the University of Arizona in Tucson, which relies heavily on support from the NIH and NASA. Although the university has begun seeking more funding from industry and philanthropists, “there’s still a sense of unease about what the future looks like”, says Kimberly Andrews Espy, the university’s senior vice-president for research.

Others are more optimistic. The University of Maryland in College Park saw its share of federal grants rebound in the 2013–14 academic year, rising nearly 3% on the year before. Its chief research officer Patrick O’Shea says that success in chasing large awards has helped his institution to prosper as federal budgets have grown tighter. “Rather than complaining, we’re trying to be more effective,” he says.

Beyond the coming election, US policy analysts are already looking to another, key political test: whether lawmakers will finalize a 2015 budget deal before they depart for the year in late November. Jennifer Zeitzer, deputy director of public affairs at the Federation of American Societies for Experimental Biology in Bethesda, Maryland, sees signs of a “good-faith effort” to approve a spending deal in the next several weeks.

But even if the lawmakers deliver, she says, that will not make up for four years of legislative torpor. “This Congress was so spectacularly unproductive,” she says, “that even showing up will give the next Congress a leg up.”