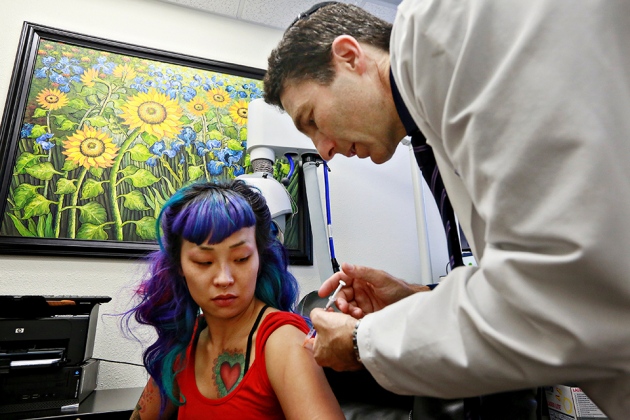 New treatments for depression are hard to find.

Roy Perlis is done with clinical research. The psychiatrist at the Broad Institute in Cambridge, Massachusetts, has led about 20 clinical trials on depression and other mood disorders over the past two decades. But he has given up seeking grants from the US National Institute of Mental Health (NIMH) — the world’s biggest funder of mental-health research — since it began promoting a new way to investigate mental illness. The agency urges researchers to study the biological roots of disease, rather than specific disorders.

This shift has been having profound impacts on mental-health research in the United States, but the magnitude of the transformation is only now coming to light. An analysis by Nature suggests that the number of clinical trials funded by the NIMH dropped by 45% between 2009 and 2015 (see ‘Rethinking mental-health studies’). This coincides with the agency’s launch, in 2011, of the Research Domain Criteria (RDoC) — a framework for research on the mechanisms of mental illness. The NIMH’s roll-out of RDoC included asking researchers to focus more on the biological bases of behaviour — such as brain circuitry and genetics — than on the broader symptoms that clinicians typically use to define and classify mental illness.

The NIMH’s embrace of fundamental research has infuriated many clinical researchers, who see it as an attempt to invalidate their methods — and say that there is scant evidence to support the idea that using RDoC will lead to greater insight or better treatments for mental illness. Many of these researchers also note that NIMH funding for clinical trials has declined steadily over the past decade, adding to the perception that the agency now favours research that uses the RDoC framework.

“It is fair to say we needed a better understanding of the neuroscience [of mental illness] to stop flailing around in the darkness,” says Perlis. “But I think we understand enough about the neurobiology and genetics that now we should be making a strong push into clinical research.”

NIMH director Joshua Gordon, who took office in July 2016, has tried to assuage these concerns by clarifying that the use of RDoC is not required to win a grant. But in a 5 June blogpost, he emphasized that the agency is not backing away from the framework. “We are going to continue with the RDoC experiment,” Gordon wrote. The NIMH will also take steps to validate the science behind RDoC’s design, he said, responding to persistent concerns that the framework has not been properly tested.

The NIMH began developing RDoC amid concerns that research into mental health was not producing more-effective treatments. Since the 1950s, psychiatrists have diagnosed patients using the Diagnostic and Statistical Manual of Mental Disorders, a handbook — now in its fifth edition, DSM-5 — that defines various illnesses by symptoms. These definitions have in turn guided clinical research on mental disorders. But progress in developing effective therapies for many common illnesses, including depression, has been slow.

The RDoC framework takes a different approach, ignoring clinical diagnoses in favour of classifying people using five categories, such as cognitive characteristics and social interactions, that each include behavioural and biological elements. The goal is to avoid lumping people with the same broad diagnosis into a single group, which can mask the differences between them — as can happen with the DSM. Not all people diagnosed with depression are suicidal, for instance, and those who are may have more in common with people with schizophrenia and suicidal feelings than with other people with depression.

Neuroscientists and mental-health researchers agree that the general idea is scientifically sound. Even the psychiatrist who led the writing of the DSM-5, David Kupfer of the University of Pittsburgh in Pennsylvania, thinks that an approach like that of RDoC — based on categories that cut across diagnoses — is necessary to improve psychiatric treatment.

But clinical researchers bristled in 2013 when former NIMH director Thomas Insel announced that the agency would shift away from funding research that classified people using DSM-5, and again in 2014 when Insel said that the NIMH would not fund clinical trials that didn’t seek to understand the biological mechanism underlying a particular treatment or illness. Although the initial furore has died down, many researchers still think that the NIMH will only fund studies that use the RDoC framework.

Daniel Weinberger, who directs the Lieber Institute for Brain Development in Baltimore, Maryland, says that many researchers at his institution who have submitted grant applications have been asked by agency reviewers how their proposals relate to RDoC. “It’s been used almost as a litmus test for whether a grant is fundable by the NIMH,” he says.

Bruce Cuthbert, who directs the NIMH’s RDoC unit, rejects that claim. He says that only about half of the grants that the agency funds can be characterized as relying on RDoC. Cuthbert notes that the distinction between RDoC and non-RDoC research is not clear cut, and that researchers can study the biological mechanisms underlying mental illness without using the NIMH framework.

Nature could not check the validity of Cuthbert’s estimate because grant applications submitted to the NIMH are confidential. But our analysis of the NIMH database shows that the number of awarded research grants that mention the DSM has plummeted since 2009. Mentions of some conditions defined in the DSM, such as ‘major depressive disorder’, have also decreased. Meanwhile, the use of ‘biomarker’ and other words related to the RDoC framework has increased.

Gordon says that several recent studies support the RDoC approach of studying traits and symptoms versus disorders. One showed that functional magnetic resonance imaging brain scans of 1,188 people with depression could be divided into four ‘biotypes’ that responded differently when treated with electrical brain stimulation (A. T. Drysdale et al. Nature Med. 23, 28–38; 2017). It suggests that people with the same diagnosis — depression — can have different underlying biology.

Measuring RDoC’s scientific impact is likely to be tricky, says Stephan Heckers, a psychiatrist and editor of JAMA Psychiatry. When applying for an NIMH grant, he says, many people in his field — psychosis research — will simply add a few people with a different DSM diagnosis to their study to claim that the project spans disorders. “That is not really what RDoC is about,” Heckers says.

It is unclear how much the agency’s adoption of RDoC has discouraged clinical researchers from seeking NIMH funding, or whether they are simply winning fewer grants. A 2014 analysis by Insel found that NIMH funding for clinical trials dropped from US$110 million in 2011 to $75 million in 2014. The US government’s ClinicalTrials.gov database mirrors this: it shows that the number of clinical trials for which the NIMH was the primary sponsor dropped from 28 in 2001 to 5 in 2015.

Whatever the cause of the drop in NIMH-funded clinical research, Gordon says that he would like to reverse it. As a first step, he has written several blogposts trying to clarify how researchers can adapt behavioural studies to examine biological mechanisms of mental illness. And he is also reconsidering some aspects of RDoC.

“One of the major problems for RDoC is the top-down approach, where we base it on categories we believe are there,” Gordon says. “We humans made them up and we are eminently fallible in putting things in categories.”

To devise a more data-driven approach, Gordon plans to piggyback on the US National Institutes of Health’s Precision Medicine Initiative, which will track the health of 1 million Americans for 10 years. The programme launched this month, and Gordon says that the NIMH is planning to send participants a set of online behavioural tests that will measure traits such as mood and response to rewards. By integrating these with electronic health records and genetic data, the agency hopes to find groups of people with particular mental traits that could be included in studies to better link brain characteristics to behaviour.

This effort could one day lead to a revision of RDoC, or even prompt the NIMH to abandon the framework altogether. “RDoC is meant to be mutable,” Gordon says. “It’s meant to be changed when the evidence is there.” But for now, he is withholding judgement on whether RDoC is a success. “I think it’s just too early to know,” he says.