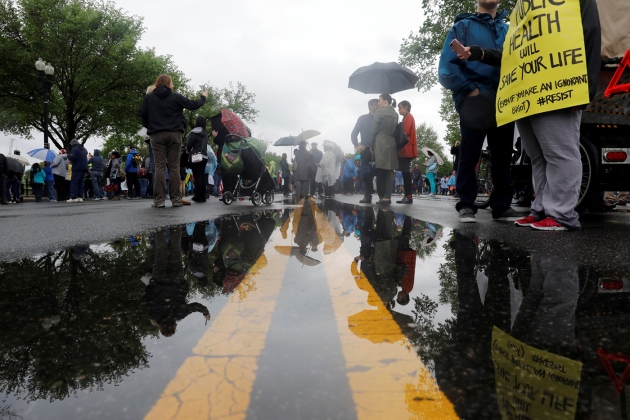 Participants in the March for Science in Washington, DC, on 22 April gather at the Washington Monument.

The US group that sparked the global March for Science movement is facing complaints about its management practices as it files for non-profit status and signals its intent to continue as “a movement to advance science and its role in public life”.

On 23 October, a group of current and former volunteers posted an open letter to the central March for Science organization in New York City, alleging that it is secretive, insensitive to the concerns of its volunteers, and unwilling to share power or information with organizers of its many affiliated ‘satellite’ groups around the world. The volunteers also claim that the organization sidelined and stonewalled experienced activists who wanted the movement to focus on how science can be used in ways that perpetuate racism, sexism and other forms of discrimination.

In a statement to Nature, the March for Science said that it welcomed the “concrete feedback and suggestions”. But volunteers have already walked away from the group, and at least one major satellite group, in New York, has severed ties. The turmoil comes at a time of renewed political activism by US scientists, much of it in protest against the policies of US President Donald Trump.

Aaron Huertas, the former communications director for March for Science and an author of the letter, says that the organization is acting in a hierarchical fashion, and not as the grassroots movement that many volunteers wanted. He adds that experienced activists in the group, many of whom focussed on issues of social justice, were the first to raise the alarm about lack of transparency — and with good reason. “Transparency prevents marginalized people from having their work and labour undervalued or thrown away,” Huertas says.

He and his letter co-signatories are concerned that the group has not published a detailed accounting of its finances, including the US$1.3 million it raised between 1 February and 30 April. They are uncomfortable with the group’s decision to ask some volunteers and board members to sign non-disclosure or confidentiality agreements, and to hire one of the group’s original co-chairs, Caroline Weinberg, as its paid interim director without advertising the job.

Weinberg says that the board hired her in August as the part-time interim executive director at a salary of $67,000 per year, with no benefits. She adds that a public search for a permanent director will begin in December, and that the March for Science will release more detailed financial information “at the end of this week or early next.” In the meantime, the disclosure on 24 October that Weinberg and her two co-chairs received some money for their services is also coming under scrutiny.

Terry Kush, the March for Science’s chief operating officer, revealed the payments in a memo to the March for Science's satellite groups. “In May and June, 12 national team members were paid for their work those months, including the former co-chairs,” Kush wrote. She added: “We’d like to reaffirm our commitment to increasing transparency within the org and the larger grassroots movement.”

The group's three original co-chairs — Weinberg, Jonathan Berman and Valorie Aquino — resigned their positions in late April and signed a confidential agreement with the organization in late August, Weinberg says. She adds that while she "cannot comment on the clauses therein", that does not prevent her from being open about "the march, our work, accounting, governance, or legal structures”. Aquino and Weinberg also signed what Weinberg calls "standard" confidentiality agreements with the board.

In a 25 October post on Twitter, former co-chair Jonathan Berman confirmed that he had been paid $6,500. “I didn't feel great about it at the time, and I'm still not sure accepting it was the right thing to do,” he wrote.

Huertas calls these payments “secret”, and argues that not disclosing the information publicly undermined the effectives of the March for Science group. Weinberg says that the payments were made in July, but “not publicly released” until now only because they took place in the middle of the fiscal year.

“The accusation that we are in this to enrich ourselves and make money is deeply offensive and something I am sadly not surprised to see aimed at women in leadership as it devalues our work and commitment to the cause,” Weinberg says. “Most people do not have the luxury of volunteering full time in perpetuity, and need — and deserve — to be paid for this work.”

The original version of this story incorrectly stated Terry Kush's gender. It has been corrected.