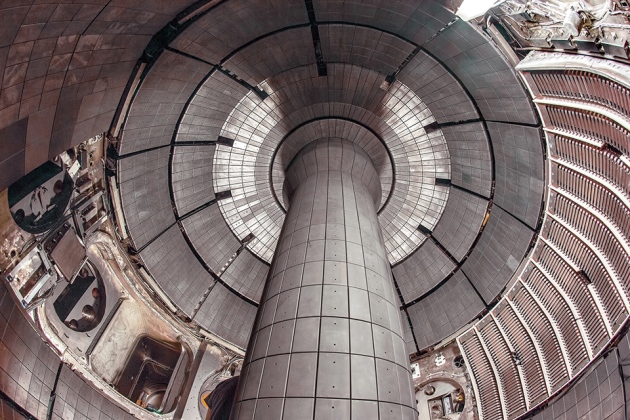 The experimental fusion reactor at the Princeton Plasma Physics Laboratory is shaped like a cored apple.

A tough year just got tougher for US fusion researchers. The country’s flagship experimental fusion reactor has broken down, less than a year after completing a 4-year, US$94-million upgrade. Now officials at the Princeton Plasma Physics Laboratory (PPPL) in New Jersey are investigating whether problems encountered during fabrication of a key component caused the reactor to fail.

Lab officials say that the machine could be offline for up to a year. Making matters worse, one of the other two fusion reactors funded by the US Department of Energy (DOE) is scheduled to shut down on 30 September. That leaves US scientists with just one major facility to conduct fusion experiments, at the defence contractor General Atomics in San Diego, California.

“It’s definitely a challenge for everybody,” says Earl Marmar, who oversees the Alcator C-Mod reactor at the Massachusetts Institute of Technology in Cambridge that is shutting down after more than two decades. “We won’t be completely without access to experimental facilities, but it’s definitely not as good as it could have been for the coming year.”

The upgraded Princeton reactor, called the National Spherical Torus Experiment Upgrade (NSTX-U), is twice as powerful as its predecessor. Like other 'tokamak' reactors, including the international ITER project under construction in France, the spherical machine uses magnetic fields to confine a hydrogen plasma. That plasma is then heated until the atoms fuse and release energy. In theory, fusion could power the world indefinitely — and cleanly.

The Princeton machine’s breakdown came to light on 27 September, after PPPL director Stewart Prager resigned. Laboratory officials say that the upgraded reactor started operating at low power in December 2015 and produced 10 weeks of high-quality data. Scientists shut it down in July after discovering that one of the coils that creates the electromagnetic trap was malfunctioning.

Prager says he was thinking about stepping down as director before the reactor coil broke. He elected to depart now, after eight years, so that new leadership can carry the investigation forward and repair the machine. “It’s sort of a normal passing of the baton,” he says.

PPPL officials initially declined to speculate about the cause of the coil malfunction, saying that an investigation is under way. But the lab later confirmed to Nature that questions about the strength of the copper in the faulty coil arose, and were investigated, when the part was being fabricated.

That fact that these concerns arose during the tokamak upgrade suggests that a more careful analysis could have prevented the reactor failure, says Stephen Dean, president of Fusion Power Associates, an advocacy group in Gaithersburg, Maryland.. “Mistakes like this do sometimes get made, but with all of the experience the fusion programme has, it should not have happened this way.”

NSTX-U programme director Jonathan Menard says that the finished coil met the laboratory’s specifications. He adds that it is not clear whether the part’s design or the manufacturing process caused problems. Another coil in the reactor, of a similar design and fabricated from the same grade of copper, has functioned well. The laboratory is planning to replace it nonetheless.

A former researcher at the Princeton laboratory, who declined to be named because he is not authorized to speak about the issue, says that the copper in the faulty coil might have been stronger than it needed to be. That would have made it harder to bend the metal into the desired shape. Even tiny faults in fabrication can cause problems when energy is coursing through the reactor, heating up the coils.

Menard says that after the coil malfunctioned, X-ray analyses found structural anomalies that may have resulted from internal melting when the reactor was operating. PPPL scientists plan to cut the coil open for further investigations. “We are going to have to wait for those results to make a more definitive statement,” he says.

Officials aren’t sure how much it will cost to repair the reactor, but say that it could take up to a year to bring it back online. Because the fusion reactor was already scheduled to halt operations in late 2016 for six months of maintenance, the net loss of research time may wind up being about six months.

The breakdown’s impacts could extend well beyond the Princeton lab. Marmar had planned to shift people to the Princeton facility once MIT’s Alcator reactor shut down. Now, MIT researchers will help Princeton to restart its reactor — and try to conduct their previously planned research by collaborating with teams at General Atomics' reactor and facilities in other countries.

The DOE decided several years ago to close the MIT reactor, but to maintain facilities in Princeton and San Diego. The US Congress reversed that decision once, in 2014, but the US government's 2016 budget assumes that the MIT reactor will shut down.

The DOE says that the US fusion-research programme remains on a solid footing, with extensive international partnerships, and will be back at full strength once the Princeton machine returns to service. Others are concerned about how researchers will cope with only one major US reactor in operation.

Dean thinks that the agency ought to keep Alcator C-Mod running for another year, until the Princeton reactor is fixed. “It’s not a good situation for our scientists to only have one machine running,” he says.

Marmar is ready to restart the MIT reactor if the DOE changes its mind. “The C-Mod facility is planned to be put into a safe shutdown state,” he says, “but if desired, could be brought back into service on short notice to support the US and international fusion community.”