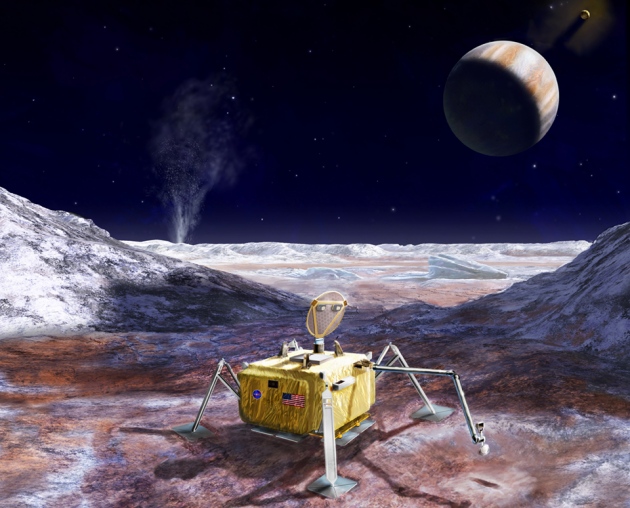 A proposed budget for NASA includes money for a lander that would explore Jupiter's moon Europa and would launch by 2024.

The US National Science Foundation’s (NSF) budget would fall slightly and NASA’s funding would see a small bump in 2018 under legislation unveiled by a US House of Representatives spending subcommittee on 28 June. The panel, which also oversees the budget of the National Oceanic and Atmospheric Administration (NOAA), largely rejected many of the deep cuts sought by President Donald Trump.

Under the plan, the NSF would receive US$7.3 billion, a 1.8% drop from the 2017 spending level, but significantly smaller than the 11% cut that Trump wants. The agency’s research budget would remain flat, at $6 billion.

The funding includes $5.9 billion for NASA’s science directorate, an increase of $94 million above the 2017 level. The spending panel has not yet released a detailed breakdown of how the money would be spent, but says that it will give more support to planetary science and astrophysics and reduce “funding for lower-priority research” — which probably includes Earth science and heliophysics research.

NOAA’s budget would see the largest drop, to $4.97 billion — 13% below the 2017 level. The House panel has not said how that money would be distributed, but says that its priorities include weather prediction and research, fisheries management and ocean exploration.

It’s not surprising that the House’s budget proposal is similar to 2017 funding levels, says Michael Lubell, a physicist at City College of New York in New York City. That’s because the House and the Senate haven’t decided on an overall spending level for the entire government for 2018, which normally happens before spending bills are introduced. As a result, lawmakers are loathe to make major changes, such as those proposed by the White House, he says.

The House spending subcommittee is scheduled to vote on the proposal on 29 June. It is one of several bills released by the House Committee on Appropriations this week that ignore the cost-cutting requested by Trump for 2018.

Trump has proposed slashing most government funding for the US Food and Drug Administration (FDA), and increasing the agency’s reliance on user fees, but the House’s FDA spending bill includes $2.8 billion for the agency — roughly even with the 2017 level. Another House spending bill would set aside $1.1 billion for research at the US Department of Agriculture, an 8% drop from the 2017 level, compared with the $894-million cut the White House has sought.

The House would also give the Department of Energy’s Office of Science $5.4 billion in 2018, which is what it received in 2017. But the House agrees with Trump on one significant point: both have proposed doing away with all support for the department’s Advanced Research Projects Agency–Energy, which funds ‘high-risk, high-reward’ energy research.