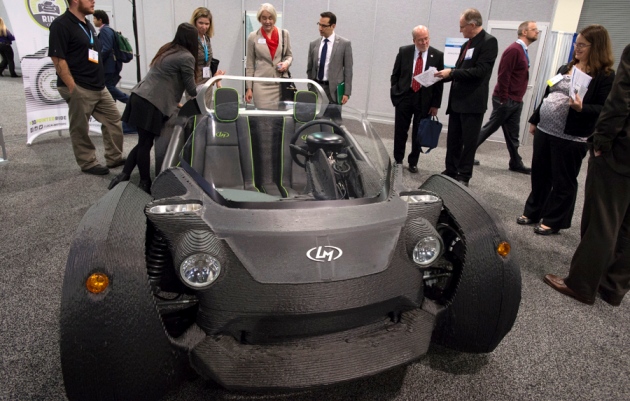 The US Advanced Research Projects Agency—Energy supports 'high-risk, high-reward' technologies, such as the 3D printing used to construct this car.

Social-science and climate-change research would take hits under legislation approved today (20 May) by the US House of Representatives.

Known as the America COMPETES Act, the sweeping measure sets priorities for research programmes at the National Science Foundation (NSF), the Department of Energy and the National Institute of Standards and Technology (NIST). It has drawn sharp criticism from science organizations, which say that the plan would limit the agencies’ ability to fund the most promising research, and from the White House.

Some of the most controversial provisions apply to the NSF. The bill suggests slashing funds for the agency’s social, behavioural and economic-sciences directorate from US$272.2 million in fiscal year 2015 to $150 million a year in 2016 and 2017 — a 45% cut. And it calls for a 12% decrease in geoscience funding, to $1.2 billion annually.

Representative Lamar Smith (Republican, Texas), the bill’s author, and chairman of the House's Science, Space and Technology Committee, says that these shifts are part of a larger plan to emphasize “basic research and fundamental scientific discovery”. With this in mind, the COMPETES bill aims to increase spending on the NSF’s mathematics, physics, engineering, biology and computer-science programmes.

But that logic has not won favour with the NSF, which in an unusual 7 May statement said the House measure “contradicts” the goal of increasing US economic competitiveness. The legislation has also displeased groups such as the American Association for the Advancement of Science, the American Geophysical Union, the American Physical Society and the Consortium of Social Science Associations (COSSA). They are among more than two dozen science organizations that have lodged letters of protest with Smith.

Scott Collins, a former NSF programme director, says that the cuts proposed by the bill are not the only reason for concern. He points to House lawmakers’ unusual decision to specify funding for individual NSF research divisions, rather than letting the agency plan programmes according to their scientific merit. “It makes things political and threatens scientists' independence,” says Collins, a biologist now at the University of New Mexico in Albuquerque.

Others point to worrisome policy provisions that would affect the energy department. The COMPETES bill would bar the department’s biological- and environmental-research programme from funding any climate-change research that overlaps with or duplicates work by other federal agencies. It would also prevent any government agency from using DOE fossil-fuel research for regulatory purposes — a move that science groups fear could hamper the development of environmental standards.

The bill differs radically from the original America COMPETES Act that was enacted in 2007 and reauthorized in 2010, says Anita Jones, a computer scientist at the University of Virginia in Charlottesville. The first law sought to double funding for the NSF, NIST and the DOE science office over ten years, using recommendations from a 2005 US National Academies report, 'Rising Above the Gathering Storm'.

“The objective was to support getting new ideas into science and technology,” says Jones. “The current COMPETES bill is at odds with those goals. Some of the policies are very bad ideas.”

Still, the measure is far from becoming law, and it is not the only legislation that will steer US science agencies in months and years to come.

As an authorization bill, the House measure suggests — but does not determine — funding levels for the NSF, the DOE’s science office and NIST. Doling out the cash is the job of the House and Senate appropriations committees, which, each year, write spending bills for consideration by the full US Congress.

And the House COMPETES bill would require approval from the US Senate and President Barack Obama — who has threatened to veto the measure — before it would become law. Meanwhile, several powerful senators have introduced their own version of the COMPETES bill, which differs significantly from the House measure. It deals only with the energy department, and seeks to boost spending on programmes that the House bill would cut. They include the Advanced Research Projects Agency—Energy (ARPA-E), for which the Senate bill proposes a budget that rises to $341 million in 2020; the House bill, in contrast, seeks to cut ARPA-E's budget below the current level of $280 million.

But even if the House COMPETES bill stalls in Congress, says Michael Lubell, public-affairs director for the American Physical Society in Washington DC, its provisions could surface in 2016 spending bills. “The parts in COMPETES that deal with climate change — that’s where you could see real mischief,” he says.

It is too early to know whether that will happen. “There is quite a bit of political alchemy in all of this,” says Wendy Naus, executive director of COSSA in Washington DC. “We’ll have to wait and see what else gets thrown in the pot.”