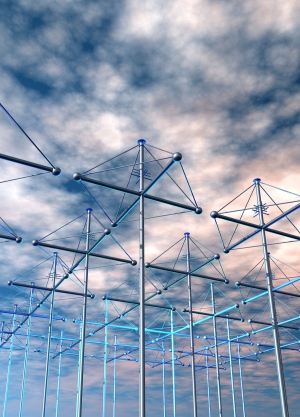 The US government plans to shut down HAARP (shown here) by mid-June.

The world’s most advanced ionospheric research facility has in its lifetime faced allegations of being a 'military death beam', a weapon of weather control and even a top-secret mind-control project. Now, the US government’s High Frequency Active Auroral Research Program (HAARP) is threatened with closure.

HAARP, near Gakona, Alaska, comprises radio transmitters and antennas that are used to heat up the ionosphere — the uppermost region of the atmosphere — creating a laboratory in the sky for scientists.The facility has been used to produce an artificial aurora and to study how charged particles behave in the ionosphere, at a total cost of more than US$250 million to build and operate.

Its bizarre backstory rivals that of a blockbuster Hollywood film. A powerful US senator from Alaska, Republican Ted Stevens, helped win approval for the facility in the early 1990s. But to justify HAARP’s price, the Pentagon had to dream up exotic military applications, sparking conspiracy theories.

In 2008, Stevens was voted out of office barely a week after being convicted of corruption (the conviction was tossed out in 2009 amid allegations of prosecutorial misconduct, and Stevens died in a plane crash the following year). He was replaced by Democrat Mark Begich, whose brother has been an outspoken advocate for the idea that HAARP is a secret military weapons project.

The practical challenge for HAARP has been to balance its role as a Pentagon-operated site for developing military applications with its function as a basic science facility. Supporters have long tried to come up with potential military uses, such as testing deep-sea communications for submarines, detecting underground military bunkers and cleaning up satellite-disabling electrons in the event of a high-altitude nuclear detonation.

Research into that last application had been supported by the US Defense Advanced Research Projects Agency (DARPA), but its chief says that the agency is now abandoning its work at HAARP. “[There is] not an ongoing need for DARPA, despite the fact that we had gotten good value out of that infrastructure in the past,” DARPA director Arati Prabhakar told a US Senate committee on 14 May.

The final DARPA-sponsored experiment, called Basic Research on Ionospheric Characteristics and Effects (BRIOCHE), is scheduled to end in mid-June. With DARPA’s work coming to an end, the US Air Force, which manages HAARP, says that there are no more paying customers for facility, and thus no reason to keep it open.

The facility will be shut down as soon as the DARPA experiment ends, says Air Force spokesman Ed Gulick. “The plan allows the Air Force to remove critical equipment prior to the onset of winter,” he says.

Some in the Pentagon seem to be interested in saving the facility, but say there is no money. “I’m torn on this,” said Alan Shaffer, the acting US assistant secretary of defence for research and engineering, at the 14 May hearing. “I think [HAARP] is a world-class facility.”

No obvious champions have emerged in Congress, and the US National Science Foundation has told HAARP supporters that it does not have funds to support the programme, says Dennis Papadopoulos, a physicist at the University of Maryland in College Park. The University of Alaska has offered to maintain HAARP but would still need government funding, at least for an interim period.

Yet Papadopoulos argues that HAARP could, similarly to other ionosphere-research facilities, be self-supporting within three or four years, living off payments from researchers. In the meantime, the facility would need about $2.5 million annually to stay open. Dismantling a facility that has cost more than $250 million to build and operate doesn’t make sense, he adds.

Scientists are left with few other options. The US National Astronomy and Ionosphere Center in Arecibo, Puerto Rico, which is also used for ionosphere research, has been undergoing repairs for several years, and is not as powerful as HAARP even when it is fully functional. That leaves just the European Incoherent Scatter Scientific Association facilities in northern Scandinavia.

“To me, the way it looks, this is the end of radio science research in the United States,” Papadopoulos says.