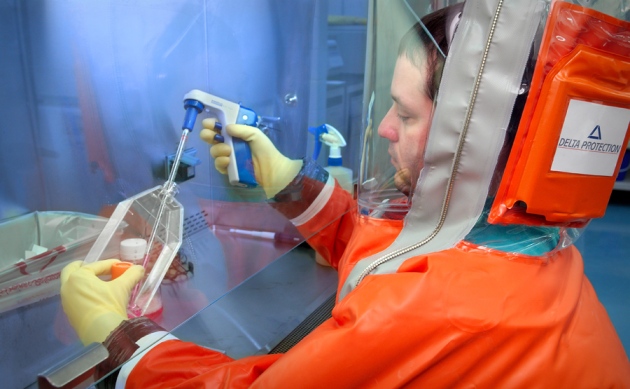 In 2014 the US Centres for Disease Control and Prevention reported safety lapses involving influenza and Ebola viruses, among other pathogens.

For the US Centers for Disease Control and Prevention (CDC), 2014 was a bad year. After a series of errors in which some agency employees were potentially exposed to anthrax and others accidentally shipped a dangerous strain of influenza virus to another lab, director Tom Frieden imposed reforms to improve safety practices. Nevertheless, the CDC, which is based in Atlanta, Georgia, reported last December that some of its lab workers had potentially been exposed to the Ebola virus.

The agency subsequently established an external committee to evaluate its biosafety practices. On 13 January, that panel issued a scathing report that was made public by the CDC on 16 March. Nature spoke to two of the report’s authors: Joseph Kanabrocki, a microbiologist at the University of Chicago in Illinois, and Kenneth Berns, a molecular geneticist at the University of Florida in Gainesville. The interview has been edited for length and clarity.

In the report, you write, “We are very concerned that the CDC is on the way to losing credibility”. That’s a very strong statement.

Berns: The CDC is really meant to be the leader in terms of working with dangerous microbial pathogens. They need in fact to set the example for everybody else. You can't require that people on the outside do it right if you're not going to do it right yourself.

Kanabrocki: Everyone who does biosafety has the CDC document at their fingertips because the CDC literally wrote the book. We hold the CDC in very high regard, and we look to it for leadership. In my opinion, it is in the US national-security interest that the CDC be a strong and robust agency. We really feel that the best thing we could do in this review was to be critical, but to offer constructive criticism.

How did things get this bad?

Kanabrocki: My sense is that the mission of the CDC over the period of a number of years — I guess you could say decades — has evolved. Because of that, I think the attention paid to lab safety on [the CDC] campus has been distracted. Their mission is very broad, and there have been a number of reorganizations at the CDC. Those reorganizations were intended to address the new additions to the CDC's portfolio, but during those reorganizations something was lost. This cohesive lab safety oversight that probably existed at one point was diluted and became fragmented.

Berns: I think you could put it exactly on the same level as the issues facing airplane pilots and the rigorous checklist they go through, because if they make a mistake it can have pretty drastic consequences. The thought is that in some cases, if there's a laboratory accident of the wrong sort and a microorganism that’s being worked with happens to get out into the community, that the consequences could be significantly worse than an airline accident. The challenge is, how do you create an environment that mitigates against the human error that can occur?

Is the CDC worse than other labs that work with pathogens?

Kanabrocki: In terms of scope, in terms of the number of investigators, it’s not so different from what we see in academia. I think the one thing that is different about the CDC, and one of the things that concerned us, was that it was not consistent. What we saw at the CDC was that the various centres have essentially developed their own mechanisms to oversee their own work, because there wasn’t the strong, overarching programme that we recommend and that we were hoping to see. There were certain areas where things were being done very, very well, and then there were areas where things were not.

Berns: Our committee is charged [by US Department of Health and Human Services secretary Sylvia Burwell] to look at several government agencies [reports on the US National Institutes of Health (NIH) and US Food and Drug Administration are due later this year]. The NIH has a very highly organized biosafety apparatus. I hope we’re going to get in a situation where there is an effective biosafety structure in place at all these government institutions.

You found that CDC employees were hesitant to report accidents, particularly those who work with highly regulated pathogens known as 'select agents', which could be dangerous in the wrong hands.

Kanabrocki: From our interviews with staff about the incidents last summer, the concern around reporting was, “Well, we don’t want to get the agency in trouble”. I think there was just a sense that people were more concerned about the security aspects and the fact that there's regulation in place around that. I'm not saying they didn’t think of the biosafety aspects, but the first response was about the security piece. That was very striking to us.

Berns: My take is that the [highly trained] people in the group where there was the most dissatisfaction and unease expressed are the people doing the actual experimentation at the bench and some of the most intricate components. Probably about a third of them expressed some sort of concerns that the organization of the safety [aspects] wasn’t perfect from their point of view.

If you're working with select agents, you’re watched over carefully. There was some concern that if an individual raised concerns, the lab could have significant difficulties. In other words, they might get shut down and everyone in the lab would be impacted. The challenge is to have a more open environment where people are not concerned about reporting a problem.

Is the agency addressing these concerns?

Kanabrocki: I absolutely think so. They're making great headway. One of the things we recommended was that there be a position very high in the organization to basically call the shots and provide that overarching guidance. That position is being recruited for, and that will report directly to the director of the CDC.

Berns: I think their intentions are extremely positive; they recognize the gravity of the situation. One of the biggest issues and problems they face in following up on our recommendations is that we recommended they really beef up their training programme at the level of the overall CDC. The issue there is that it requires new facilities, which means that it’s capital-intensive. For that, they need a specific slot in their budget, and funds were requested. That is the toughest issue from their point of view, but it is an important factor from our side because it’s really important everyone go through a formal training programme.

What are the broader implications of these breaches?

Kanabrocki: There are a number of people out there who feel that some of the work we do is too dangerous to do. From a public-health perspective and national-security perspective, this work is very important. But it’s critical we get it right, it’s critical that we have public support. If we don’t have that support, we can't be looking like we don’t know what we’re doing.

I think the infectious-disease research community at large does a great job. You don’t see a lot of lab-acquired infections. Accidents happen in every realm, and what's critical is that those accidents be reported promptly and that they be responded to appropriately. If that’s done, in my opinion, there is responsible science going on.

This story orginally named Cynthia instead of Sylvia Burwell as Secretary of Health and Human Services. The text has now been corrected.