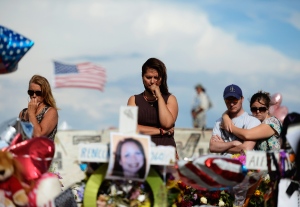 The massacre in a cinema in Aurora, Colorado, was one of the events that spurred new calls for US funding of research into possible links between lack of gun regulations and violence.

Economist Bisakha Sen wants to study how US states' gun laws and gun cultures correlate with certain crimes and with firearms deaths in each state — and whether differing laws and cultures in neighboring states “spill over” to influence a state’s statistics.

But although President Barack Obama ordered the US Centers for Disease Control and Prevention (CDC) to recommence gun research in the wake of last December's massacre of 20 schoolchildren and 6 adults in Newtown, Connecticut, federal funding for research on gun violence remains scarce so far. So Sen has turned to the crowd-funding website Microryza, and she is aiming to raise $25,000 in 100 days to fund her research.

“The research needs to be done,” says Sen, an economist at the University of Alabama at Birmingham. However, she says, there is essentially no federal funding for any kind of gun-violence prevention or policy research. So when Microryza organizers sought her out several months ago and asked her to pitch a project, she decided she didn’t have much to lose by trying.

Sen’s campaign launched on 7 March. As of 29 May, she had raised $12,175 of the $25,000 that she says would fund her and two graduate students to carry out a 6-month study. Last week, Microryza extended the closing date for her effort from 31 May to 15 June.

Sen’s turn towards private donors might catch the interest of other gun-violence researchers, whose work is often stymied by the fact that the CDC has been barred, since 1996, from funding any activities that “advocate or promote” gun control. The agency has interpreted the law to mean that it cannot fund virtually any firearms research. Last year, Congress extended the prohibition to include the US National Institutes of Health (NIH) and other agencies.

Sen’s proposal grew out of a study, published last year in Preventive Medicine1, that found that states with more extensive background checks for gun buyers had fewer firearm homicide and suicide deaths between 1996 and 2005. 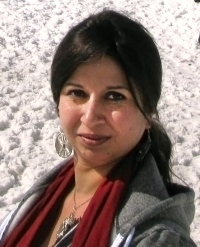 Economist Bisakha Sen was surprised to receive an invitation to collect donations for her research on a crowd-funding website.

Sen, who also studies public-health issues such as racial disparities in obesity, wanted to follow up the firearm study, but shelved the idea for lack of funding. Then, in January, she got the call from Microryza. (Her first reaction, she says, was: “I thought that [crowd-funding] was for music.”)

Her study would look at state gun laws, including those that mandate background checks, those that allow people to carry concealed weapons and ‘stand-your-ground’ laws, which allow a person to use deadly force in self-defence without having first tried to avoid the conflict.

Sen’s research would also describe state gun culture through metrics such as percentage of gun-owning households, and then correlate it with the number of accidental deaths, suicides and homicides from firearms. Sen would also ascertain levels of burglary, robbery and assault, with the aim of discovering whether evidence exists for strict gun laws increasing crime by reducing people's abilities to protect themselves. She would also examine whether gun laws and culture 'spill over' to affect such statisitics in neighbouring states.

Some experts say that Sen’s approach is a cheap and simple one that may raise interesting questions, but can’t answer them. “Ecological studies such as the one proposed here….often yield results that cannot be replicated using more rigorous methods. It is important to remember that correlation does not imply causation,” says Garen Wintemute, the director of the Violence Prevention Research Program at the University of California, Davis (see 'Firearms research: The gun fighter).

Wintemute, who has conducted gun research for three decades, in March levelled similar criticism2 at a study led by Eric Fleegler, an emergency physician at Boston Children's Hospital in Massachusetts, which found that states with stricter gun laws had lower numbers of firearm fatalities3.

Another expert who examined the brief proposal on the Microryza site raised several concerns about its methodology. “Sen does not even outline a procedure for establishing which confounding variables must be controlled,” says Gary Kleck, a criminologist at Florida State University in Tallahassee. “This is worrisome, since her choice of control variables in her previous (2012) research was conspicuously arbitrary and unjustified.”

Sen retorts that her 2012 paper used confounders that are “widely used in research on gun violence."

Sen describes herself as “agnostic” about gun policy and says that her project should not be viewed as a drumbeat for tougher gun regulation, such as more extensive background checks. “We may well find that [background checks] really don’t have that big an effect.” 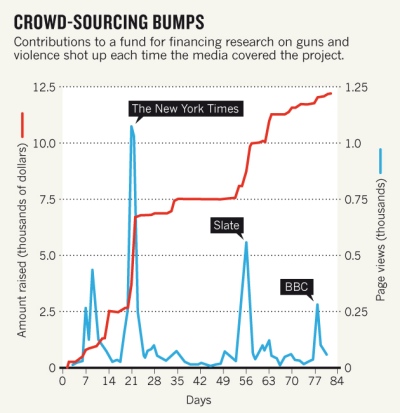 As for the crowd-funding experience, she says she has learned that success requires one to be “immensely” social-media-savvy and to keep generating media hits.

Indeed, Sen’s success in fundraising so far can be tracked (see ‘Crowd-sourcing bumps’) by articles in a New York Times blog, the online magazine Slate and, last week, BBC News. But such dependence on the attention, and the altruism, of others, does not make a funding strategy, Sen says. “I don’t ever see this becoming a substitute for NIH funding.”