Of the top ten leading causes of death in the United States, Alzheimer’s disease — which ranks sixth — is particularly devastating in that there is no cure, no way to prevent it and no proven way to slow its progression. And with at least 11 million Americans expected to have the disease by the middle of the century (see ‘Degeneration generation’) — boosting the annual costs of health care to more than US$1 trillion — the US government is anxiously looking to researchers to improve the prognosis.

Last week, the government set out how it planned to spend a $50-million top-up to this year’s funding for the National Institutes of Health (NIH) in Bethesda, Maryland, announced in February as part of a bid to “prevent and effectively treat Alzheimer’s disease by 2025”. 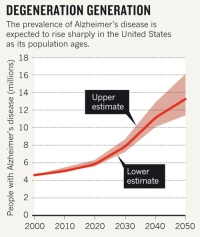 The money adds to the $448 million that the NIH was allocated to spend on the disease this year, and roughly half of it is already being used by scientists funded by the National Human Genome Research Institute and the National Institute on Aging. They are preparing to conduct whole-genome and whole-exome studies to discover mutations that may predispose someone to the disease or protect against it. The scientists are assembling a bank of thousands of DNA samples from patients and other people whose DNA could be informative — such as elderly individuals who carry predisposing mutations but show no sign of the disease. The first results from the effort are expected as early the end of this year.

Of the remaining money, $4 million will fund Alzheimer’s-oriented grants to small businesses, and $2 million will be used to help generate model human Alzheimer’s cells from induced pluripotent stem cells. The rest will be devoted to two groundbreaking clinical trials, one of which builds on the fact that Alzheimer’s begins to attack the brain 10–15 years before symptoms appear — a conclusion confirmed by new imaging tools that allow the disease to be monitored in living people.

This trial will receive $16 million, and is the first attempt to avert the onset of Alzheimer’s by treating people who have not yet developed symptoms. It is a five-year study using an antibody called crenezumab, made by Genentech of South San Francisco, California. Already in phase II trials in patients with mild-to-moderate symptoms, the drug is thought to work by binding to fragments of amyloid-β — insoluble, neuron-damaging peptides that aggregate in the brains of those with Alzheimer’s — both neutralizing it and making it easier for immune cells in the brain to eliminate it (see ‘Neural defenders’). The Banner Alzheimer’s Institute (BAI) in Phoenix, Arizona, together with a team at the University of Antioquia in Medellín, Colombia, will test the drug against a placebo in 300 symptom-free people, two-thirds of whom carry a rare genetic mutation that makes them certain to get the disease. Mild cognitive impairment sets in at a median age of 44 in people carrying the mutation, and full-blown dementia at 49, decades earlier than is common with the more typical sporadic form of the disease.

Most of the participants will come from a well-studied extended Colombian family living in Medellín and its surrounding rural areas that is estimated to have 5,000 members. They range from educated urbanites to humble farmers, all descendants of the same eighteenth-century founder. Although most do not know, and do not wish to know, their genetic status, about 1,500 are estimated to carry the mutation. 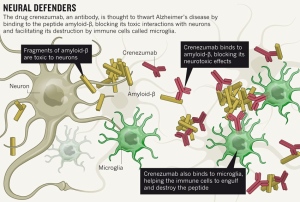 “You cannot meet these families and not be converted to their cause. It’s heartbreaking,” says Eric Reiman, one of the trial’s three leaders and executive director of the BAI.

The other trial will receive $7.9 million and is being led by Suzanne Craft, a neuropsychologist at the University of Washington and associate director of geriatric research at the VA Puget Sound Health Care System, both in Seattle. It will test an intranasal insulin spray against placebo in people with mild cognitive impairment or early Alzheimer’s. Insulin receptors are abundant in synapses in brain regions that are important for memory and cognition, and in Alzheimer’s, amyloid-β can knock out the receptors and disrupt memory formation. Flooding rat brain cells with insulin has been found to block the fragments and protect the receptors (F. G. De Felice et al. Proc. Natl Acad. Sci. USA 106, 1971–1976; 2009). When Craft tried the strategy in humans by giving intranasal insulin to people with mild cognitive impairment or early Alzheimer’s, the results were impressive: about three-quarters remained stable or improved cognitively over the four months of treatment, Craft says.

Plan for the future

Craft says that she was “thrilled” to be funded for a larger, follow-on trial. But like many in the field, she worries that the national Alzheimer’s plan is under-funded in the long term. “We all would like to believe that this is an important moment,” she says, “but we need to see follow-up in order to be truly convinced that this will provide an ongoing, coherent effort to address Alzheimer’s disease.”

“We really have all the pieces we need to move forward in the development of effective therapeutics.”

On 15 May, an advisory council to the US Department of Health and Human Services recommended that the government quickly ramp up research spending to $2 billion per year if it wants to meet its goal of developing effective treatments and preventive measures by 2025. That would mean a quadrupling of the NIH’s current spending on Alzheimer’s research.

“We really have all the pieces we need to move forward in the development of effective therapeutics,” says Paul Aisen, a neuro­scientist at the University of California, San Diego, and director of the Alzheimer’s Disease Cooperative Study — a 21-year-old programme of government-funded clinical studies aimed at developing Alzheimer’s treatments. “The missing piece right now is the money.”

The first test of a follow-up will come later this year as Congress wrestles over the administration’s 2013 budget request for the NIH. Included in the request is an additional $80 million for Alzheimer’s research. Proponents say that a failure to adequately fund research today will only lead to higher costs later.

“We’re in trouble now,” says Aisen, “but in another 20 years, if things don’t change, we’re going to be in a dreadful situation.”