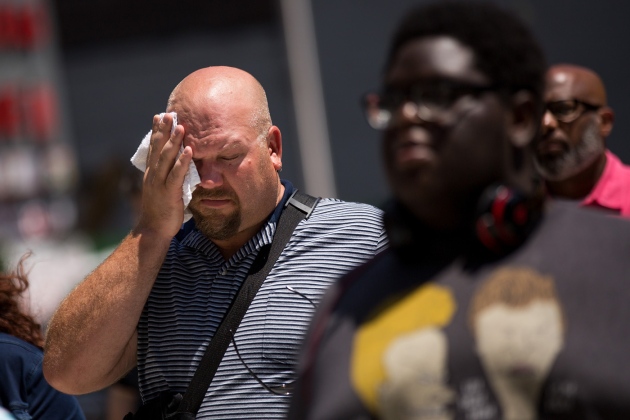 Heat waves are growing more common in many parts of the United States.

From warmer temperatures to more extreme weather, melting glaciers and rising sea levels, humanity is fundamentally changing the planet by pumping greenhouse gases into the atmosphere, US government scientists said on 3 November in their latest assessment of climate science.

The average global temperature has increased by 1 °C since the pre-industrial era, the 477-page report says — adding that the past 115 years comprise the warmest period “in the history of modern civilization”. The analysis warns that temperatures could increase by another 4 °C by the end of the century, with dramatic consequences for humans and natural ecosystems.

The findings are at odds with the policies of US President Donald Trump, who has questioned well-established tenets of climate science and vowed to protect and promote the US fossil-fuel industry. Trump’s stances led many scientists to worry that his administration would try to block or tamper with the climate-change assessment, but several scientists who helped to write the document reported no problems.

“We weren’t interfered with, and we ended up producing something that I think is of tremendous value,” says David Fahey, an atmospheric scientist with the National Oceanic and Atmospheric Administration in Boulder, Colorado, and a coordinating lead author of the analysis.

The climate-science report is the first volume of the fourth National Climate Assessment, a legally mandated analysis of the causes and impacts of global warming that is due in 2018. The second volume focuses on how climate change is affecting life in the United States, from crop yields to property damage from extreme weather. That document was released in draft form, along with a report on the carbon cycle. The US National Academy of Sciences is set to review the latter two documents.

“The science speaks for itself,” says Don Wuebbles, a climate scientist at the University of Illinois at Urbana-Champaign and a coordinating lead author of the climate-science report. “It’s hard to counteract the basic observations and the truth of the science with any kind of political playing around.”

The trio of documents paints a dramatic picture of how global warming is affecting people and communities across the United States. Tidal flooding is accelerating in more than 25 cities along the coasts of the Atlantic Ocean and the Gulf of Mexico. Large forest fires have become more frequent in the western part of the country, and warmer spring temperatures combined with shrinking mountain snowpack are reducing the amount of water available to the region’s cities and farms. As a result, the draft climate-impacts report warns, “chronic, long-duration hydrological drought is increasingly possible before the end of the century”.

The climate-science report was released just days before the latest United Nations climate talks kick off in Bonn, Germany. The summit will be the first major meeting of its kind since Trump vowed to pull the United States out of the 2015 Paris climate pact.

Few observers expect the US government’s latest set of climate-change analyses to affect how the Trump administration approaches energy and environmental issues. In August, the National Oceanic and Atmospheric Administration disbanded an advisory committee that was intended to help the nation prepare for a warmer climate by translating the findings of the coming climate assessment into guidance for cities, states and industry.

Nor is it clear whether senior Trump administration officials will accept the reports’ core scientific conclusions. As recently as March, US Environmental Protection Agency administrator Scott Pruitt said he did not believe that carbon dioxide is a major driver of global warming.

Nonetheless, many scientists and environmentalists lauded the new reports for bolstering the case for more-aggressive action against climate change.

“The full assessment, when it gets published, is going to show that there are palpable impacts that are going to hit every part of the country,” says Andrew Light, a senior fellow at the World Resources Institute, an environmental think-tank based in Washington DC. “It’s the responsibility of leaders to take note of that and act accordingly.”