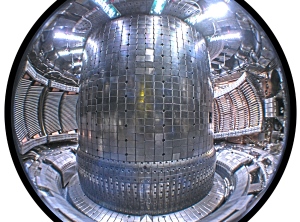 For years, US researchers have been steadfast in their support of ITER, the world’s largest fusion-energy experiment, which is under construction near Cadarache, France. But with funding commitments to ITER now putting the squeeze on three existing facilities in the United States, enthusiasm for the international project is becoming as difficult to sustain as a fusion reaction.

“I think we should ask whether this is the right path,” Earl Marmar, head of the Alcator C-Mod fusion experiment run by the Massachusetts Institute of Technology in Cambridge, told colleagues on 18 July. The venue was a meeting of a US Department of Energy (DOE) group tasked with setting priorities for the non-ITER portion of the US fusion programme. At the meeting, in Bethesda, Maryland, Marmar pointed out that when US fusion researchers signed on to ITER in 2003, the project’s total construction cost was projected to be about US$5 billion, of which the United States would provide 9% over ten years. Now, the construction costs are projected to be roughly four times as much. Furthermore, the funds to support ITER were not supposed to be siphoned from existing facilities — yet if the total budget for US fusion science remains flat, as is expected, that is precisely what will happen (see ‘Death by ITER’).

Marmar’s facility houses one of three US tokamaks — doughnut-shaped vessels in which physicists magnetically confine hydrogen nuclei in a plasma and heat them until they fuse and liberate energy. Alcator received $29 million in federal funding this year. But as ITER payments increase, US President Barack Obama’s 2013 budget proposal for the DOE would chop Alcator’s allocation back to $16 million, shutting down operations and forcing the experiment to lay off more than half of its 120 staff members. 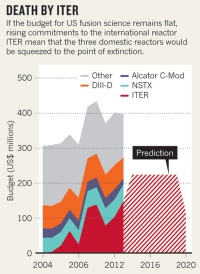 Stephen Dean, president of Fusion Power Associates, an advocacy group in Gaithersburg, Maryland, says that DOE officials have little choice but to cut Alcator, the smallest of the three US experiments, to afford an overall US ITER commitment that has grown to about $2.2 billion. “Why can’t we get by with two?” asks Dean. “It’s not an insubstantial argument.”

Yet leaders at the three experiments insist that all provide unique science (see ‘Tokamaks under pressure’). Marmar says that Alcator, for example, can operate at extremely high magnetic-field strengths that mimic those planned at ITER. And whereas most tokamaks have inner walls made of graphite, Alcator researchers have pioneered the use of tungsten — a more durable material that ITER is planning to adopt. Current experiments at Alcator also explore the use of special radio-wave antennas to heat the plasma in ways that reduce erosion of the walls.

Stewart Prager, director of the Princeton Plasma Physics Laboratory in New Jersey, has a different argument for keeping all three experimental facilities running. If the United States is to spend all this money on ITER, he says, then it must maintain domestic plasma-science expertise that can take advantage of what is learned there. “Otherwise, the results from ITER will only benefit the rest of the world.”

It seems that some members of the US Congress are listening. On 6 June, the House of Representatives voted to boost ITER funding and to support the domestic programme at almost 2012 levels. The Senate’s version of the bill, which has not yet been voted on, currently agrees with the cuts in the Obama administration’s budget request — but directs the DOE to explore the impact of simply withdrawing from ITER.