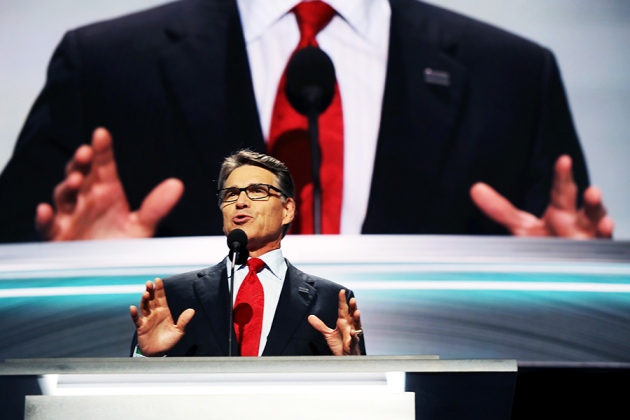 Former Texas governor Rick Perry is Donald Trump's choice to lead the US Department of Energy.

Incoming US president Donald Trump’s government is beginning to take shape, and Earth scientists are getting nervous.

Trump’s latest Cabinet appointments include former Texas governor Rick Perry, a climate sceptic, for energy secretary, and ExxonMobil chief executive Rex Tillerson for secretary of state — a position that would make him the United States’ lead emissary on climate change. The pair helps to fill out a roster of advisers with strong ties to industry and a distaste for government regulation. Trump’s transition team also asked the Department of Energy (DOE) for the names of employees who had worked on climate-change issues, further unsettling researchers.

“It feels like a war on science, and on climate science in particular,” says Alan Robock, a climatologist at Rutgers University in New Brunswick, New Jersey. “That’s very upsetting.”

Scientists won a small battle on 14 December, when Trump’s team disavowed the memorandum it sent to the DOE seeking information on climate-change programmes. The request sparked widespread outrage and drew a rebuke from the department after it was leaked on 9 December. At the Fall Meeting of the American Geophysical Union (AGU) last week in San Francisco, California, some researchers billed the episode as a blueprint for how they might defend their interests after Trump takes office on 20 January.

“There is power, even with an administration that never admits a mistake, in bringing things to light,” says Andrew Rosenberg, who heads the Center for Science and Democracy at the Union of Concerned Scientists in Cambridge, Massachusetts.

Other researchers are copying government climate-data sets, to preserve them in case the Trump administration and the Republican-controlled Congress follow through on proposals to cut back Earth-science research at NASA or otherwise restrict studies of global warming. One rescue effort had archived 11 of 91 data sets on its list for preservation as of 16 December; these include a global temperature record maintained by NASA and palaeoclimate archives held by the National Oceanic and Atmospheric Administration (NOAA).

Marcia McNutt, president of the US National Academy of Sciences, says that private foundations have expressed interest in “funding up to the order of billions of dollars” for climate-change research if the Trump administration reduces support for such work. But McNutt — who directed the US Geological Survey (USGS) from 2009 to 2013 — is not ready to give up on government science. “I don’t want that to be an excuse for the government to pull away — to say private philanthropy can do this, the government doesn’t need to fund it,” she told journalists at the AGU meeting.

The road ahead for scientists looks tough. Perry dealt with energy issues as governor of Texas, but he lacks experience with key areas of the DOE portfolio, says John Deutch, a chemist at the Massachusetts Institute of Technology in Cambridge. Deutch, who leads the department’s advisory board, says that Trump should identify a deputy energy secretary who understands the agency’s programmes on basic science, nuclear weapons and national security.

And Perry is not the only climate sceptic poised to join Trump’s inner circle. Trump’s pick to lead the US Environmental Protection Agency is Oklahoma attorney-general Scott Pruitt, who has sued the federal government to overturn greenhouse-gas and air-quality rules.

The president-elect has not announced whom he would like to run NASA, NOAA or the USGS, among other science agencies. McNutt says that the National Academies of Science, Engineering, and Medicine have provided his transition team with a list of potential candidates, but none of those people has been contacted by Trump staff.

Some scientists argue that even if policies to fight climate change are weakened or struck down under Trump, his latest nominations hint that there may be ways to promote clean energy. Tillerson has said that a carbon tax is the best way to address global warming. And although Perry is a strong proponent of fossil fuels, Texas’s wind-power production grew significantly during his governorship.

“Those are places to insert a progressive agenda into an otherwise kind of ugly and cloudy landscape,” says Daniel Kammen, an energy researcher at the University of California, Berkeley.

McNutt advises scientists to stay clear-eyed as they confront whatever challenges the Trump administration brings. “I see so many people in this country freaked out,” she says. “That is exactly what those who want to disrupt science are hoping to achieve.”