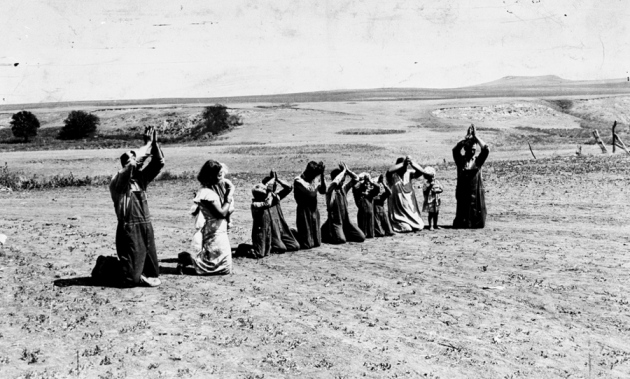 A family in North Dakota prays for rain during the devastating Dust Bowl drought of 1934.

Farms failed and livestock starved in the central United States during the Dust Bowl drought of the 1930s. The event was not just the region’s worst dry spell in modern memory — it was the worst in North America over the past millennium, researchers report in Geophysical Research Letters1.

“Not only did 1934 [the first year of the Dust Bowl] stand out in terms of extent and intensity, but it was the worst by a fair margin,” says Benjamin Cook, a climate scientist at the NASA Goddard Institute for Space Studies in New York and a co-author of the study. The drought takes its name from a period in April 1934, when winds blew dust from the US Great Plains as far east as North Carolina and as far south as Florida.

Cook and his colleagues used the North American Drought Atlas, a 2,005-year record derived from tree-ring chronologies that reconstructs drought and precipitation patterns. They found that the 1934 drought covered more than 70% of western North America and was 30% more intense than the second most severe drought in the region, which happened in 1580.

The researchers also looked for causes behind the 1934 drought. An earlier study2 led by Siegfried Schubert of the NASA Goddard Space Flight Center in Greenbelt, Maryland, had pegged the Dust Bowl’s origins on sea-surface temperatures, which were marginally cooler in the Pacific and warmer in the Atlantic.

But in the latest analysis, Cook and his colleagues say that this event had a minor role in the drought. They pin the blame instead on a change in atmospheric circulation: a high-pressure ridge centred over the west coast of North America during the autumn and winter of 1933–1934 that blocked wet weather from California and the Northwest.

A similar, but more persistent, atmospheric pattern was at work off the California coast this past winter, and moved storms north. Cook and his colleagues found that similar ridges preceded some of the worst west coast dry spells, including the 1976 California drought — a two-year event marked as the most severe in California’s recorded history.

“Whenever you see drought, there is always a ridge. But last year’s ridge was a record,” says Simon Wang, a climate scientist at Utah State University in Logan. “The question is what’s causing it to amplify?” Wang and his colleagues have found that the atmospheric ridge in California last winter can be traced to human-made warming of the western Pacific Ocean3.

Previous studies have also identified a human role in the Dust Bowl. Sparse rainfall and poor land-use practices helped to kick up dust and spread it across the Midwest and eastern United States during the historic drought. In an earlier study, Cook and his colleagues found that airborne dust particles amplified the drought by blocking the Sun’s energy, which reduced evaporation, cloud formation and rainfall over the region4.

In the latest analysis, Cook and colleagues “make a strong case that the most famous drought in American history was aggravated by human activity, by testing an old idea with climate models and empirical analysis,” says David Stahle, director of the Tree-Ring Laboratory at the University of Arkansas in Fayetteville.