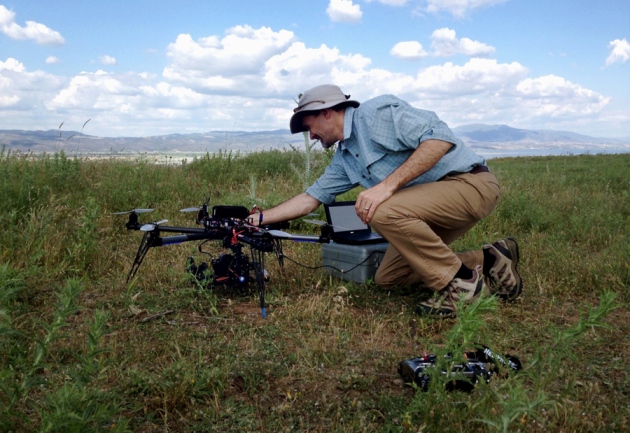 US archaeologist Chris Roosevelt can use a drone for research in Turkey, but home is a no-fly zone.

Over the past few months, archaeologist Chris Roosevelt has been remotely piloting a petite six-rotor helicopter named Hydra over western Turkey, snapping high-resolution photographs of the scrubby terrain. The pictures will be assembled into three-dimensional maps to help Roosevelt and his colleagues to understand how people who built a kingdom in the region 3,500 years ago interacted with the landscape. But back home at Boston University in Massachusetts, he is not allowed to fly the copter — not even to teach budding archaeologists on campus how to use it.

On 23 June, the US Federal Aviation Administration (FAA) told drone users that such aircraft cannot be flown for ‘commercial’ use — defined as any activity that is not recreational or part of a government programme. That includes research and teaching at private, but not public, universities. Even though the announcement merely clarified existing rules, it caught many by surprise and reinforced a seemingly arbitrary dichotomy that treats researchers differently on the basis of their institutional affiliation.

“It would be the rare person to think of archaeological activities as a commercial enterprise,” says Roosevelt. “But for the FAA, commercial automatically includes education and research.”

Drones’ small size, low cost and long-lasting batteries have made them popular in research and business. Scientists deploy the machines to study everything from atmospheric science to zoology, and companies are eager to harness them for aerial photography and package delivery. This has put the FAA under pressure to develop regulations prohibiting uses of drones that compromise safety or violate privacy. A few years ago, the US Congress ordered the FAA to develop such rules by September 2015. But in a report this July, the US Department of Transportation’s inspector general expressed doubt that the FAA would make its deadline.

The administration has shut down almost all commercial drone flights until those regulations are in place — to the ire of some researchers. “The FAA’s severe restrictions on research and education are out of all proportion to the actual risks posed by small-model aircraft used responsibly on private property,” says Paul Voss, an engineer who does atmospheric research at Smith College in Northampton, Massachusetts. On 25 July, Voss and 28 of his colleagues wrote to the FAA outlining their concerns. Because the agency is forbidden by law to put such severe restrictions on model aircraft flown by hobbyists, they say, it has established a bizarre double standard in which recreational users can pilot drones but trained researchers cannot.

Geographer Scott Drzyzga of Shippensburg University in Pennsylvania, for example, enjoys flying small helicopters in his free time, and had hoped to show his students how to use them to capture geographical information. “There are things I can do as a recreational user that I cannot do in front of my students,” he says. “It’s frustrating.”

Alison Duquette, a spokesperson for the FAA, says that the distinction has been in place for years, and the agency has always made it clear.

Engineer Mary Cummings at Duke University in Durham, North Carolina, hopes to overcome the regulatory obstacle by teaming with colleagues at a nearby public university to test drones for wildlife tracking. But for now the FAA rules confine her to indoor testing — poor conditions for determining whether her machines can follow animals in the wild. “We are looking to go to another country to address this problem,” she says.

Even at public universities, red tape and legal fears have spooked researchers who want to use drones. Larry Purcell, a crop scientist at the University of Arkansas in Fayetteville, has used the devices to monitor the effects of drought on soya beans. He did not know that he was required to fill out a 50-page application for each field he wanted to survey. Instead, he sought and obtained verbal permission from FAA staff at a local airport. Shortly after his university issued a press release about his work in 2011, Purcell received a cease-and-desist letter from the FAA’s regional office. “It’s still very confusing as to what’s allowed right now and what’s not,” he says. Purcell has turned to kites to carry his cameras aloft, but the compromise has its shortcomings: no wind means no data.

Others at both public and private institutions have continued their work without notifying the agency. Several scientists contacted by Nature declined to describe their work with drones, for fear of drawing FAA attention.

And some have gone to extremes to stay out of trouble. A few years ago, Voss designed 200‑gram drones small enough to pack into a suitcase for field work in Antarctica. The craft worked well, but he has since got rid of them. “I don’t even want them in the lab,” he says. “I want to be squeaky clean.”