When US President Barack Obama proposed a US$664-million cut in congressional funding for the US Centers for Disease Control and Prevention (CDC) in his 2013 budget request, he tried to ease the pain by replacing much of it with money from other sources. But only days after the 13 February request, a vote on Capitol Hill made clear just how vulnerable those substitutions are, suggesting that the US public-health agency is on increasingly shaky financial ground.

The proposed cut would come from the part of the agency’s budget that is controlled by Congress and pays for the core operations of the CDC, based in Atlanta, Georgia. These include grants to local, county and state public-health departments to monitor infectious diseases or track food-borne outbreaks. Core funding is also used to maintain the Strategic National Stockpile, a repository of drugs reserved for fighting epidemics and bioterrorism. If Obama’s plan is enacted, the CDC’s congressionally controlled funding will have fallen by roughly 20% since 2010 — a decline that “looks like a disaster waiting to happen”, says Scott Becker, executive director of the Association of Public Health Laboratories in Silver Spring, Maryland.

Cuts to the CDC have already contributed to the loss of nearly 50,000 jobs in state and local health departments since 2008. This year, the administration argues that “efficiencies” will make possible the specific cuts it has proposed in areas such as adult-immunization funding and epidemiological support. But CDC advocates and public-health officials are sceptical. A proposed $47-million cut to the Strategic National Stockpile “is a lot more than just efficiency. It’s going to cut capability as well,” says Crystal Franco, an associate with the Center for Biosecurity of UPMC in Baltimore, Maryland. “We are reaching the tipping point where preparedness efforts are going to be reversed because of the lack of funding,” she adds.

The CDC’s budget was significantly boosted a decade ago because of concerns over bio­terrorism in the wake of the 9/11 attacks. But as a budget vice tightens on the US government, the administration has begun to rely on two other sources to offset cuts to CDC programmes that have historically been funded by Congress (see ‘Cut to the core’). 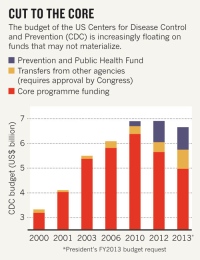 One source is transfer payments made to the CDC from other public-health agencies. The 2013 budget would boost those payments by $296 million over this year’s level. But that would require congressional approval, which is far from guaranteed.

The second source of funds to offset CDC cuts — $903 million from the Prevention and Public Health Fund (PPHF) — could be even less secure. Established by the 2010 health-reform law, the multibillion-dollar fund is aimed at disease prevention but has become an object of disdain for those opposed to the law. In the current atmosphere of fiscal constraint, the PPHF has become a target for raiding, and already, as part of a payroll-tax-cut extension that was signed into law by Obama on 22 February, Congress has cut the fund by 20%, or $250 million, in 2013, and by a total of $6.25 billion to 2025.

The fund “is vulnerable. It could go away quickly,” says James Hughes, a CDC veteran and immediate past president of the Infectious Diseases Society of America in Arlington, Virginia. What’s more, says Hughes, now a professor of public health at Emory University in Atlanta, the fund was intended to launch innovative prevention initiatives, “not to replace core public-health capacity support”.