In a watershed moment for chimpanzee research, the US Institute of Medicine (IOM) yesterday released a report declaring that “most current use of chimpanzees for biomedical research is unnecessary” and recommending the sharp curtailing of government-funded research on humankind’s closest genetic relative. Within an hour, Francis Collins, director of the National Institutes of Health (NIH), which funds research on chimpanzees, announced that he accepted the recommendations and would move to implement them as swiftly as possible.

“I have considered the report carefully and have decided to accept the IOM committee recommendations,” Collins told reporters. “NIH is in the process of developing a complete plan for implementation.” 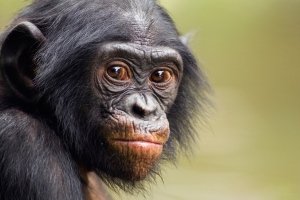 Some biomedical research on chimpanzees will no longer be funded by the National Institutes of Health.

As a result, the NIH will not entertain grant applications involving chimpanzees until further notice. The agency will complete reviews of grant applications already submitted, but will not send money out the door if they are approved until they have been assessed by a soon-to-be-formed expert committee. Projects already under way will continue to be funded until they can be assessed by the new panel.

Collins said that he is assembling a working group that will include a broad range of experts from outside the agency to assess the roughly 37 projects involving chimpanzees that the biomedical agency currently supports. He guessed that “something like 50%” would be phased out for failing to pass muster under three stringent criteria laid out by the IOM report.

For biomedical research involving chimpanzees, the IOM committee said that NIH should limit funding to studies for which there is no other suitable model available; that cannot be performed ethically in humans; and without which important advancements will be significantly slowed or prevented.

The bulk of chimpanzee work currently being done is in the area of monoclonal antibodies and hepatitis C.

The report notes the significant progress of alternatives to the use of chimpanzees, from in vitro techniques to mouse models, and urges the NIH to support their development, and access to them. However, it also concludes that the emergence or re-emergence of infectious diseases may require the use of chimpanzees as research subjects in the future.

“It’s not a ban,” says Warner Greene, an IOM committee member who is director of the Gladstone Institute of Virology and Immunology at the University of California, San Francisco. “It’s a set of criteria [against] which you judge the appropriateness of future” research projects.

However, adds Jeffrey Kahn, the committee chair, who is a bioethicist at Johns Hopkins University’s Berman Institute of Bioethics, “what we would say is the bar is very high”.

The report caused euphoria among animal-welfare activists. “This is the beginning of the end of chimpanzee research,” says John Pippin, director of academic affairs at the Physicians Committee for Responsible Medicine, an animal-advocacy group in Washington DC. “There were very few areas [of research] that they left open.” Another group, People for the Ethical Treatment of Animals, exulted at this blog.

The committee also defined criteria that behavioural research and comparative genomics experiments — which often only involve taking blood samples — should meet in order to be approved.

Christopher Walker, a virologist and director of the Center for Vaccines and Immunity at the Nationwide Children’s Hospital in Columbus, Ohio, called the committee’s criteria and its suggestion for an independent committee to apply them “a huge contribution”. Walker has an NIH grant that is in its third five-year term. It uses chimpanzees in an effort to understand protective immunity to the hepatitis C virus. “I would want my own experiments to be judged against those criteria,” he says, provided that a ‘robust’ committee is assembled to assess proposed studies. “Most of us will expect it to be a pretty tough review. And if that’s the outcome I think it will be very good.”

Thomas Rowell, director of the New Iberia Research Center in western Louisiana, which houses the largest number of chimpanzees among NIH-supported research centres, says that his centre “concurs in principal with most of the recommendations” made by the IOM. “Committee members confirmed the centre’s position on the importance and necessity of having continued access to a chimpanzee model to promote public health research,” he notes.

Asked whether he agreed with the report’s conclusions, Collins said: “I found their recommendations very compelling and scientifically rigorous and in that sense I agree with them.”

The report’s recommendations do not pertain to chimpanzee research carried out by industry, but some predicted that its effects would inevitably be felt in the private sector. “I think it’s going to raise the bar for non-NIH-funded research, because federal government standards in research generally, with animal and human subjects, tend to set the tone, to set the pace for everybody,” says Gregory Kaebnick, a bioethicist at the Hastings Center in Garrison, New York.