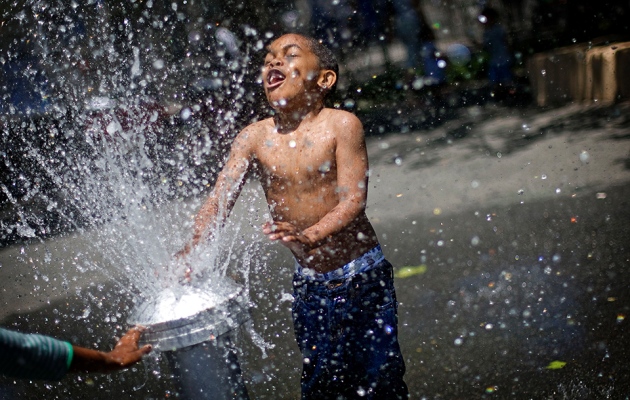 A boy plays in New York’s Harlem neighbourhood, one of the areas included in the national study.

Frederica Perera has stocked a dozen freezers with an unusual biological bounty over the past two decades. Inside are vials of umbilical-cord blood, urine and placentas from more than 700 pregnant women and their children from the Washington Heights, Harlem and South Bronx neighbourhoods of New York City. This biobank has proved invaluable in her efforts to understand how urban environments influence children’s health from birth through childhood.

Now, Perera’s team is gearing up for another challenge: developing a tool that can test her bank of umbilical-cord blood samples for common pollutants and use the results to predict later impacts on neurodevelopment and obesity. The scientists are also joining a major US government programme that seeks to understand how environmental, behavioural and social factors affect children’s health.

Known as the Environmental Influences on Child Health Outcomes (ECHO) programme, the effort will support dozens of longitudinal cohort studies across the United States. Researchers working on the project will meet on 15–16 February in Arlington, Virginia, to make decisions key to its success: how to collaborate, and how to combine and compare the individual data sets.

The ECHO project emerged from the ashes of the controversial National Children’s Study (NCS), a programme run by the US National Institutes of Health (NIH) that aimed to track 100,000 children from before birth to age 21. The NIH cancelled that study in 2014, after spending more than a decade and US$1.2 billion trying to get it off the ground.

ECHO organizers say that their project will be different. By using cohorts that are already under way, they hope to side-step some of the problems that plagued the NCS, which had trouble recruiting participants, defining its hypotheses and sticking to its budget.

Marrying up existing cohort studies will enable the scientists to study large numbers of children more cheaply than if they created one large cohort from scratch. Doing so will also let them examine rarer health outcomes and differences between subpopulations. But the approach brings its own problems.

“The purpose of the national meeting is to try to combine the cohorts,” says Douglas Ruden, director of epigenomics at Wayne State University’s Institute of Environmental Health Sciences in Detroit, Michigan, and a member of the ECHO steering committee who is helping to lead a participating cohort. “They all have different goals and study designs, and somehow they have to merge them into one cohort — and that’s the hard part.”

That will be a major challenge, agrees David Savitz, vice-president for research at Brown University in Providence, Rhode Island, who led an NCS pilot site. But Savitz is confident that ECHO will succeed because of smarter planning, better leadership and the quality of the cohort studies selected. He says that the programme director, Matthew Gillman of the NIH, is a respected scientist who has experience coordinating multiple projects.

In September 2016, the NIH awarded $157 million to ECHO to support work on four main topics: obesity; airway conditions; neuro­developmental disorders (including autism); and prenatal and postnatal outcomes, such as premature birth and birth defects.

Ruden’s study has tracked about 1,000 mother–infant pairs for seven years. He has shown that exposure to lead during pregnancy might be associated with epigenetic changes in a woman’s grandchildren — specifically, shifting patterns of methyl groups attached to DNA, which can affect gene expression1. Under ECHO, Ruden will double the size of his cohort and look for similar impacts from prenatal exposure to other metals and organic pollutants.

With their $1.5-million ECHO grant, Perera and her team are working to identify a biomarker in umbilical cord blood that would reveal whether a child was exposed in the womb to pollutants called polycyclic aromatic hydrocarbons. This group of more than 100 chemicals, particularly common in urban environments, can be traced to sources such as vehicle exhaust, cigarette smoke and coal-burning; many of them are thought to cause cancer. If the scientists can locate a potential biomarker, they could use samples and information from other ECHO cohorts to help test and validate it — and to look for links with alterations in children’s development or health.

In the long term, scientists hope that ECHO will inform another component of the initiative: a network of clinical trials in medically underserved and rural areas to test treatments based on cohort findings. The trials are still being selected, Gillman says, but could evaluate things such as behavioural interventions to prevent obesity in rural areas.

Some project leaders are nervous about ECHO’s future — and about funding for the health sciences generally — under the administration of US President Donald Trump, but Gillman says that both Republicans and Democrats in Congress have supported the project. “We see a bright future for ECHO, no matter the change in administration,” he says. “Our mission is to enhance the health of children for generations to come.”