The US National Science Advisory Board for Biosecurity (NSABB) today recommended the publication of two controversial avian flu papers.

In December 2011, the board said that experimental details of the two studies should be redacted from any publications because of concerns that the information could be used in a bioterror attack. The board also feared that publishing the details would prompt more laboratories to work on the viruses, making an accidental release more likely. 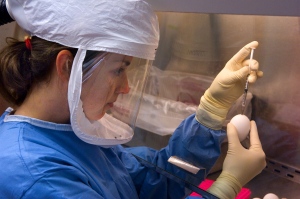 New guidelines aim to prevent concerns about dual use being raised only at the eve of publication.

Today, after a two-day meeting, the board decided to revise its earlier decision. The NSABB unanimously recommended full publication of one of the two disputed papers, a manuscript submitted to Nature by Yoshihiro Kawaoka of the University of Wisconsin-Madison and his colleagues. “We at Nature are delighted,” says editor-in-chief Philip Campbell. “Subject to any outstanding regulatory or legal issues, we intend to proceed with publication as soon as possible.”

But in a 12-to-6 vote, the board advised the publication of only the data, methods and conclusions of a second manuscript, submitted to Science by Ron Fouchier of Erasmus Medical Center in Rotterdam, the Netherlands.

Kawaoka says he believes that the board’s revised decision was influenced by a better understanding of the public-health implications of the work, which described the changes in a key viral protein called haemagglutinin that could make avian flu more transmissible among mammals. “We were able to explain that very few mutations are needed for the haemagglutinin of the currently circulating H5N1 viruses to become a haemagglutinin that supports respiratory droplet transmission in ferrets,” he says.

The revised NSABB opinion brings the board closer in line with the World Health Organization, which last month advised full publication of both papers. The NSABB is only an independent advisory board, and the US government has yet to weigh in with any official decision on the new NSABB recommendations. Publication of the manuscripts may also be affected by export controls in various countries. Such controls can be used to regulate the dissemination of restricted information.

Ultimately, the NSABB’s revised decision was a practical one, says Richard Ebright, a molecular biologist and biodefence expert at Rutgers University in Piscataway, New Jersey, who has argued that the research should not have been funded in the first place. Much of the information was already in the public domain, and the remainder, he says, was likely to be leaked online. “Information that’s not born classified can’t be reborn as classified.”

The NSABB said that its decision was informed by a new government policy that could facilitate earlier review of ‘dual-use’ research that can both benefit the public and be misused to threaten public health, agriculture or the environment. The policy, released on 29 March, makes it compulsory for the first time for all US federal research agencies to assess research proposals for their dual-use risk in cases where the research involves one of a list of dangerous pathogens specified by the policy.

Under the new guidelines, research judged to be of risk would then be subject to mitigation measures such as modifications to the proposed research, tougher biosecurity or biosafety precautions, and determinations of how the research should be communicated, and to whom. If federal department and agencies consider that mitigation measures do not rule out serious risks of the research, they would have the authority to request voluntary redaction of results, classify the research and withhold or withdraw research funding.

The new rules are "a tremendous step forward", says Ebright, who says the obligation for prior review of research proposals is "critically important” and should prevent cases such as the two H5N1 studies, whose potential biosecurity and biosafety implications were raised only on the eve of publication of their results.

But the rule's Achilles' heel, he adds, is that although research funders will have to inform their parent government departments of the outcomes of reviews and any mitigation measure taken, there seems no mechanism to allow independent oversight of these. That is a "a very big weakness", he says, and could result in what seems to be a comprehensive scheme not being applied effectively in practice.

The dual-use rules come into force immediately, and agencies will have 90 days to report existing projects of dual-use risk to their parent agencies. Anthony Fauci, director of the US National Institute of Allergy and Infectious Diseases in Bethesda, Maryland, told the Associated Press that the National Institutes of Health had already completed its review, and "found fewer than ten projects that met the criteria for further risk management”.