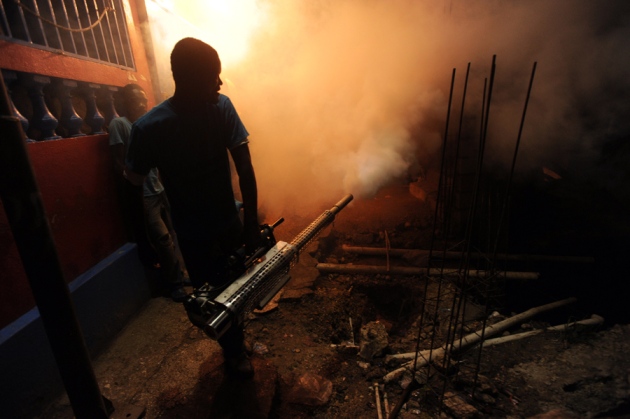 A worker sprays insecticide in Haiti to fight mosquitoes that carry chikungunya and other diseases.

In the past few months, passengers at North American airports have been warned that travel to the Caribbean might result in an unwanted souvenir. The first outbreak of chikungunya virus in the Western Hemisphere began in the French part of the Caribbean island of St Martin in December and has spread rapidly around the region, infecting more than 500,000 people.

Since then, at least 480 travellers have returned to the United States with the mosquito-borne disease, raising concerns that an insect biting one of those people would spark a US chikungunya outbreak. Yet so far, only four locally acquired cases have been confirmed in the country, all in southern Florida. The virus has gained more of a foothold in Central and South America: authorities have confirmed 174 cases of locally transmitted disease in El Salvador, Panama, Costa Rica, Venezuela and the Guianas (see ‘Tropical transfer’).

For now, the Caribbean strain of chikungunya does not seem likely to expand into the rest of the Western Hemisphere, mostly because it is spread by the tropical mosquito Aedes aegypti. However, several major chikungunya outbreaks have been fuelled by a specific mutation of the virus that makes it more suited to transmission by a different species of mosquito — a scenario analysed by Carrie Manore, a mathematical epidemiologist at Tulane University in New Orleans, Louisiana, and her colleagues. They report that genetic changes in the virus could propel chikungunya deep into North and South America (C. A. Manore et al. J. Theor. Biol. 356, 174–191; 2014). The insect that could cause the damage is the Asian tiger mosquito (Aedes albopictus), which has been expanding worldwide for the past two decades and taking diseases such as chikungunya and dengue with it (see Nature 489, 187–188; 2012).

Chikungunya was first detected in the 1950s in East Africa. It causes fever, severe joint pain and, in rare cases, death. Most people recover within a week, but painful arthritic symptoms can linger for months. 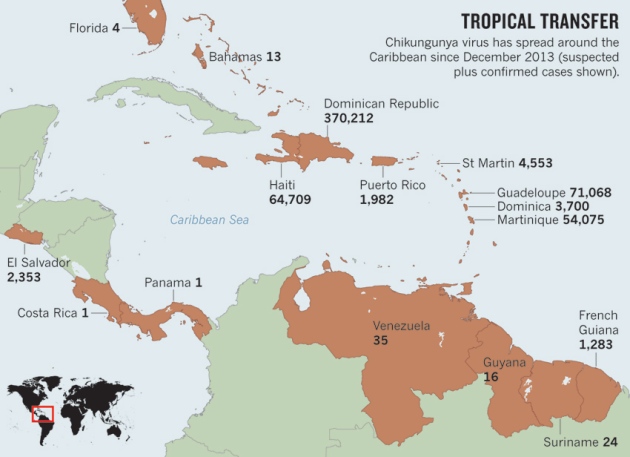 The Caribbean is fertile ground for the spread of the disease, no matter which mosquito is spreading it. In temperate regions, winter weather kills A. aegypti mosquitoes and acts as a natural brake on the spread of the diseases they carry. But in the Caribbean, A. aegypti can survive year-round, and serves as an outstanding host vector for diseases, says Sylvain Aldighieri, a physician at the Pan American Health Organization in Washington DC who has helped to track the current outbreak.

Native to Africa, A. aegypti had spread throughout the warmer zones of the Western Hemisphere by the seventeenth century. It is found across the southern United States, and has penetrated as far north as Virginia. In mainland South America, says Aldighieri, it can be found in every country except Chile. Still, the Caribbean might be the only place in the hemisphere with the right density of mosquitoes and travelling people to enable a chikungunya outbreak.

Scientists are worried about the rapid expansion of the Asian tiger mosquito, which is more aggressive than A. aegypti and more efficient at transmitting chikungunya. During a 2005 chikungunya outbreak on the island of Réunion, east of Madagascar, A. albopictus suddenly became a more efficient vector because a genetic mutation in the virus allowed it to reproduce better in the mosquito’s midgut and to be transmitted more easily. The same mutation arose independently in the virus on the Indian Ocean island of Mayotte in 2006, and again in 2007 when it appeared in Madagascar.

If a similar mutated virus strain were introduced to the Western Hemisphere — or if, as in the past, the Caribbean strain were to mutate — chikungunya would become a much larger public-health concern for the Americas.

In North America, the Asian tiger mosquito is found in 32 states, from New York to Texas, and has been spotted in California, New Mexico and Arizona. Data for the Southern Hemisphere are less prevalent and not so reliable, says epidemiologist David Morens of the US National Institute of Allergy and Infectious Diseases in Bethesda, Maryland. However, the species is known to be widespread in Latin America.

Manore and her colleagues used a mathematical model to assess the danger of a chikungunya outbreak spread by the Asian tiger mosquito. It considers rates of susceptibility, infectiousness and immunity in both humans and mosquitoes to predict how an outbreak might evolve over time. The researchers find that the relative risk and severity of an outbreak depend on the virus–mosquito combination, with the highest risk coming from the Asian tiger mosquito carrying the Réunion mutant strain of chikungunya.

“I’d be concerned about areas that have both Aedes albopictus and Aedes aegypti,” Manore says. In these regions — where the virus could most easily jump to the more aggressive species — there is an urgent need for more mosquito trapping and studies of how the virus and the insect interact, she says.

Even within countries, different subgroups of the same mosquito species sometimes transmit the same viral strain differently, which makes comprehensive sampling a pressing matter. And tracking something as pervasive and hard to pin down as a mosquito is no simple task, says Erin Staples, a medical epidemiologist at the US Centers for Disease Control and Prevention in Atlanta, Georgia. “Right now, chikungunya is definitely one of our concerns,” she says. “How well will it be transmitted? We don’t know.”