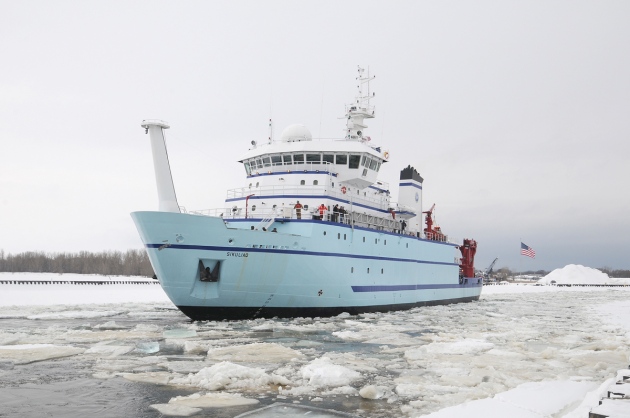 The latest addition to the US oceanographic research fleet will soon set off for its home port in Alaska.

A brand-new research vessel is buoying the hopes of US oceanographers. In the first week of June, the University of Alaska Fairbanks plans to take possession of the RV Sikuliaq, a US$200-million, 80-metre ship that is currently floating in the Great Lakes. It is the first research vessel built for the National Science Foundation (NSF) since 1981; polar scientists have been calling for a versatile ice-strengthened ship for four decades.

“People ask, ‘Why should the Arctic have a special ship’? It’s a special place,” says Vera Alexander, a biological oceanographer at the University of Alaska who has been involved in the campaign to build an Arctic research vessel. Plans call for the Sikuliaq to spend much of its time examining the effects of shrinking sea ice and other climate-change impacts on northern ecosystems.

The Sikuliaq’s launch is particularly striking because most of the US oceanographic-research fleet faces a grim future. Many of the other 23 vessels are ageing, and there is little money available to replace them. Construction of the Sikuliaq was made possible only because, in 2009, then-NSF director Arden Bement chose to give the project $148 million from a government economic-stimulus package.

With its ability to navigate coastlines, ice-bound waters and the open sea, the Sikuliaq can explore a wide range of science questions, says Alexander. Biologists will be better able to track animal populations in places such as the Bering Sea, one of the world’s most biologically productive marine ecosystems. Geologists will be able to map the sea floor between Alaska and Siberia to reveal details about when the land bridge between the two was exposed, letting humans cross from Asia to North America. And chemical oceanographers will be able to track the spread of pollutants through once-pristine environments.

The Sikuliaq carries the latest oceanographic bells and whistles, including a high-tech boom that can be lowered over the side to deploy instruments such as sonar and oceanographic sensors. Unlike its predecessor, the now-retired Alpha Helix, the Sikuliaq has the ability to yank sediment cores up from the sea floor. A huge expanse of open deck space towards the stern will allow researchers to bring on board custom equipment, including autonomous underwater vehicles. “It’s pretty amazing,” says Michael Castellini, dean of the school of fisheries and ocean sciences at the University of Alaska.

The ship also has advanced navigation technology to improve manoeuvres through sea ice. That is important, because although its reinforced double hull allows it to plough through floating ice up to a metre thick and a year old, it cannot handle thicker, multi-year ice. (In line with the vessel’s capabilities, sikuliaq is an Inupiaq word that means ‘first-year sea ice that is safe enough to walk on’.)

Although construction delays have put it roughly a year behind schedule, “they didn’t significantly alter when we wanted the first science to start”, says Castellini. Plans call for the Sikuliaq to be at sea for some 270 days a year. One advantage to having a dedicated science vessel is that it will not be diverted for other purposes; research ships such as the US Coast Guard icebreaker Healy are occasionally called away to attend to emergencies such as delivering fuel to the icebound city of Nome, Alaska.

Before it can do any science, the ship must pass final tests and be transferred from its builder, Marinette Marine of Wisconsin. After the University of Alaska team takes charge, the Sikuliaq will head out of the Great Lakes through the Saint Lawrence Seaway and then proceed southward along the US east coast. The ship will be based in Woods Hole, Massachusetts, for about a month while it undergoes shakedown tests at sea, and will then continue on, through the Panama Canal. It will do its first research in the deep waters of the tropical Pacific Ocean before heading north to reach its home port of Seward, Alaska, by February 2015.

This article incorrectly stated that a deck on the vessel able to accommodate large equipment is at the bow — it is at the stern. The text has been corrected.