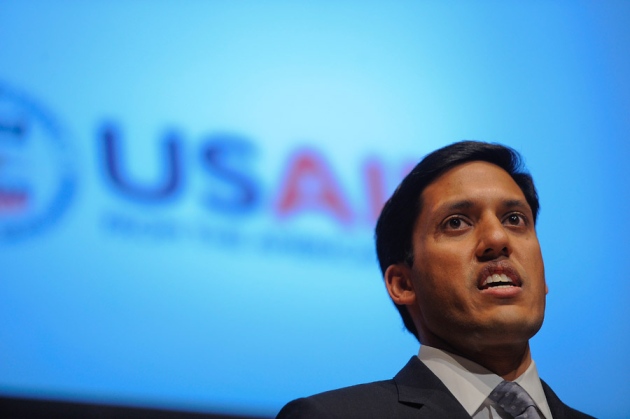 Rajiv Shah, director of the US Agency for International Development, is increasing science funding at his agency.

The US Agency for International Development (USAID) today announced the launch of its US$100-million Global Development Lab in Washington DC — a move that will elevate the role of science at the agency. USAID says that it will put in place a research-and-development pipeline for food security and nutrition, maternal and child survival, energy access and sustainable water solutions. The announcement marks a shift in USAID’s approach to global development, from funding organizations to meet specific goals with existing technologies to instead identifying problems and funding research into new technological interventions to solve them.

USAID director Rajiv Shah describes the lab as “DARPA for development”, referring to the US Defense Advanced Research Project Agency (DARPA), which takes a high-risk, purpose-driven approach to developing military technology. “At DARPA, they define needs they are trying to meet — and find partners best suited to help find solutions, test them and scale them,” he says.

That means that instead of equipping 100 hospitals with a certain type of respirator for infants, for example, the Global Development Lab would support research into innovations that might improve child survival within 48 hours of birth. Working with partners from industry and academia, the lab may fund several pilot projects, then evaluate the results and choose the most promising approaches for further investment. “We are changing the way we work,” says Shah.

The emphasis on research has not been seen at the agency for several decades, says Molly Elgin-Cossart, a senior fellow in global development at the Center for American Progress in Washington DC. In the 1970s, for example, USAID funded efforts such as the Cholera Research Laboratory in Bangladesh, which developed oral rehydration salts for the treatment of diarrhoea. But in the late 1990s, the agency was downsized under pressure from Congress to reduce foreign aid. Research is on the rise again, says Elgin-Cossart. Shah says that investments in science and technology across the agency have increased from $127 million in 2008 to $611 million today.

The lab now employs 26 scientists, with expertise ranging from bioengineering to tropical ecology. The lab is hiring more scientists and searching for a new chief scientist to replace Alex Dehgan, who in 2010 became the first chief scientist in two decades. He left in December. The lab is also launching a 4-year fellowship programme that, like DARPA, aims to rotate mid-career scientists through the agency. Dehgan says that the agency needs scientific leadership at all levels of the organization, not only to generate ideas but also to recognize successes.

Elgin-Cossart says that the shift makes sense, given that development is no longer just a matter of donation from foreign governments. Private investment and public spending by domestic governments now have much larger roles. With more organizations acting independently, development is also more complex than it used to be, she says.

To that end, the lab has already enlisted 32 organizations as ‘cornerstone’ partners to help to develop and scale up innovations the lab funds. Together, these partners — which include companies, non-profit organizations and universities — spend roughly $30 billion on research and development for emerging markets. One partner is Coca-Cola, based in Atlanta, Georgia, which has a vested interest in water supplies. And so, for example, USAID could encourage the company to support clean-water innovations.

Some observers are worried that the pendulum at USAID may be swinging too quickly in the direction of research. Casey Dunning, a senior policy analyst at the Center for Global Development, a think tank in Washington DC, says that the wider development community may not have the scientific expertise to hold USAID to account for its spending. And Amanda Glassman, director of global health policy at the Center for Global Development, says that USAID has limited experience in identifying promising technologies. “I’m sceptical of a government agency’s capacity to pick a winner from a portfolio,” she says.

Dehgan, one of the architects behind the lab, acknowledges that development depends on more than just science and technology. But he says that they are increasingly important, given the technical nature of current challenges such as food security, climate change and energy. While others view the shift toward research as a gamble, Deghan says that it's a move that USAID has to make, he says. “If the initiative fails, we will see an agency that risks its very relevancy in the next decade.”