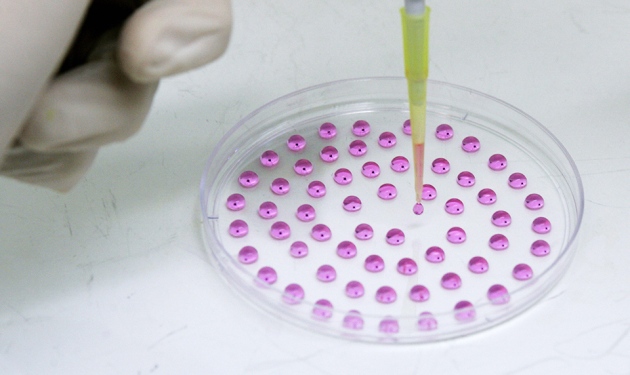 Adding human stem cells to animal embryos is a growing area of research.

Since September 2015, researchers have been banned from receiving funding from the US National Institutes of Health (NIH) for adding human stem cells to animal embryos, creating blends called chimaeras. But a proposal by the NIH released on 4 August would lift the funding moratorium, except for certain situations. It would also set up a panel to review the ethics and oversight of grant applications.

The new rules shorten the developmental window during which human cells can be introduced into non-human primate embryos, disallowing it before the stage of development in which the central nervous system begins to form. This is intended to limit the number of human cells that would make up the chimaera’s brain. They also prohibit breeding animals that contain human cells, so as to prevent a human-like embryo from growing in a non-human womb or the birth of an animal that is more humanized than its parents.

Any grant applications that fall into a grey area would undergo a panel review. “It would be an extra set of eyes to make sure we’re not triggering any animal-welfare issues,” says Carrie Wolinetz, associate director for science policy at the NIH in Washington DC. The panel will pay particular attention to applications involving primates, mammals at very early stages of development or those in which human cells could affect an animal's brain. Past a certain point of development, rodent embryos with human cells that could affect brain development are exempt from panel review, says Wolinetz. This is because NIH’s scientific advisers think that the rodent brain is substantially different from ours and would not become human-like.

Chimaeras are a growing area of research. Currently, researchers use them to study early embryonic development and to create animal models of human diseases. But one major goal is to engineer animals to grow human organs. The organs could later be harvested from the adult animal and used for transplantation into a patient.

Unlike in the United States, it is illegal to perform such research without approval in the United Kingdom, even with private funding. Laws introduced in the United Kingdom in January mandate extra reviews of proposals involving certain types of chimaeras, including ones that would have a human appearance or features such as faces or hands.

Reactions from researchers have been mixed. Steven Goldman, a neuroscientist at the University of Rochester in New York, says that the 2015 moratorium was overkill and is relieved that it will now be lifted. The new guidelines, he says, are “more intelligent from the standpoint of where the science is”.

But Ali Brivanlou, a developmental biologist at the Rockefeller University in New York City says that the NIH proposal focuses on the wrong aspects of the issue. Rather than restricting the timing of modification, he says, there should be more focus on limiting the percentage of the animal that ends up being human.

“On a positive note, it’s amazing that this is going on,” he says, because there are many related questions and ethical issues that should be debated publicly.

Françoise Baylis, a bioethicist at Dalhousie University in Halifax, Canada, thinks that the new rules leave many questions unanswered. Currently, there are only two types of research subject, human and non-human, and there are clear distinctions on how to treat them. With chimaeras, researchers risk creating a third category for which there are no research guidelines, she says. “We just tend to say we’ll treat them like non-human animals, as if nothing happened,” Baylis says.

The NIH rules and other countries’ laws focus on cognition as the important factor for limiting chimaera research. But that is not necessarily the best way to determine how humanized animals should be categorized because it can be subjective, Baylis says. For instance, people who are cognitively impaired are still treated as human subjects in research, whereas very intelligent primates are not.

These are the kinds of questions that the oversight panel will discuss when reviewing specific grant applications, says Wolinetz. The panel will give recommendations to the scientific grant reviewers, which could include suggestions such as not allowing certain types of chimaeras to be brought to term, or monitoring an adult chimaera’s behaviour before continuing the experiment. “There are no hard and fast lines,” she says. “There’s going to be some on-the-job learning.”

The NIH’s rule is now open for public comment for 30 days, after which the agency will issue a final rule and lift the moratorium. Wolinetz hopes that this will be ready in time for the grant cycle that begins in January 2017.

Clarification on some of the projects that would trigger additional panel review were added to this article after it was first published.