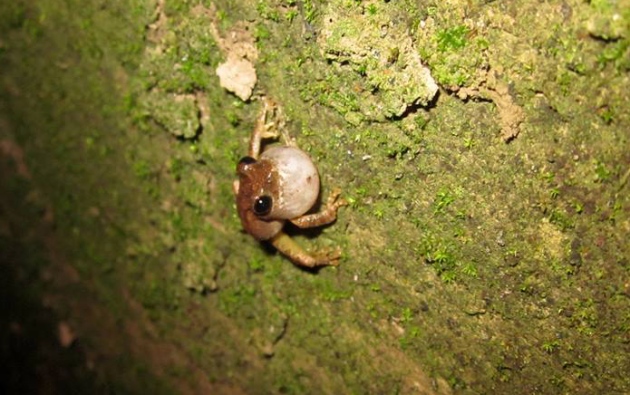 Mientien tree frogs in the city of Taipei have taken to wooing females from storm drains.

A tiny tree frog seems to be using city drains to amplify its serenades to attract females. In research published1 today in the Journal of Zoology, researchers found that the Mientien tree frog native to Taiwan congregates in roadside storm drains during the mating season.

Audio recordings revealed that the mating songs of the frogs inside the structures were louder and longer than those of their less-streetwise rivals, who gathered in patches of land next to the drains.

“This is perhaps the first study to show that an animal preferentially uses human-made structures to potentially enhance the sounds of its vocal communication signals,” says Mark Bee, a biologist at the University of Minnesota, Twin Cities, in St Paul. “These males could be taking advantage of the enhanced acoustics in drainage ditches to outdo their competition.”

Frogs' ability to amplify their voices is a known phenomenon. In 2002, researchers showed2 that male Metaphrynella sundana frogs in Borneo use hollow tree cavities in their natural habitats to boost the volume of their calls.

In the latest study, a team led by zoologist Yu-Teh Kirk Lin at the National Taiwan University in Taipei studied Kurixalus idiootocus tree frogs in a wooded suburb of Taipei during the mating season, which lasts from February to September.

Males of the species exhibit a ritual known as lekking, and form groups, or leks, during the mating season to compete for females with some kind of courtship behaviour — in its case, singing. The team found that the urban tree frogs used open concrete drains along roads as lek sites — drastically different from those in their natural habitats, where they gather at ponds to warble.

The researchers randomly established 11 plots of 10 metres long and 0.5 metres wide within the drains, and adjacent 10-metre-wide sections of land outside the gutters for monitoring after dark when the frogs sing their mating songs. 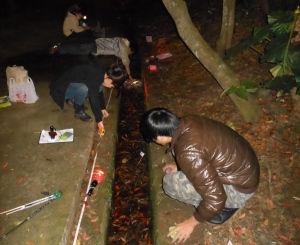 Calls emitted from inside the drains were louder and longer than those outside — both important mate-selection criteria for choosy females in many frog species, says Lin. Although impossible to distinguish with the human ear, acoustic analysis software revealed the drain calls to be about 4 decibels louder than those outside. The length of all 13 notes in a frog’s call were also 10% longer when the call was emitted from inside the drains.

But the study did not assess whether these males were indeed more romantically successful than their counterparts. The authors say that further studies are needed to confirm that the males hop into drains specifically to amplify mating calls.

Bee notes that there may be other reasons, such as avoiding predators, for the frogs to jump into man-made structures. Alternative hypotheses still need to be eliminated, he says.