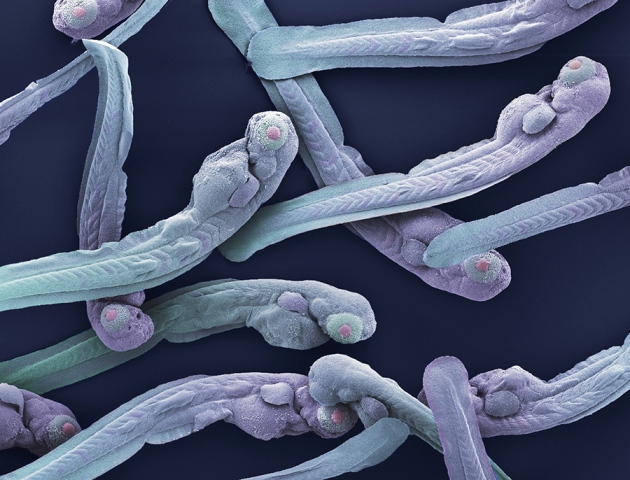 Zebrafish embryos are the stars of a peer-reviewed paper that investigates the NgAgo gene-editing technique.

A heated dispute over gene-editing that began in blogs and social media is now playing out in the scientific literature.

Six months ago, Chinese researchers reported that an enzyme called NgAgo could be used to edit mammalian genes — and that it might be more accurate and more versatile than the popular CRISPR–Cas9 gene-editing technique1. But almost immediately, other scientists complained that they could not replicate the experiment.

Replications, ridicule and a recluse: the controversy over NgAgo gene-editing intensifies

Now, a paper with 20 authors, published in Protein & Cell2, lists multiple attempts that failed to replicate the original experiment — and another, published in Cell Research3, suggests that NgAgo may only block, but not edit, genes when it is injected into zebrafish (Danio rerio) embryos.

Han Chunyu, a biologist at Hebei University of Science and Technology in Shijiazhuang and the lead author on the original NgAgo paper, says that he stands by his team’s original claims, and that the latest Nature Biotechnology report “provides us some clues as to why others are having problems”. He says that he hopes to submit a scientific paper explaining why others are having difficulty by the end of the year.

Nature Biotechnology says that it will give Han’s team the opportunity to investigate and respond to the criticisms in the latest report by January 2017. “An update will be provided to the community at that time,” said a spokesperson. Nature Biotechnology is editorially independent of Nature’s news team and is owned by Nature’s publisher, Springer Nature.

Gene-editing techniques that precisely disable or modify very specific sections of a genome have taken the biomedical world by storm. The technique described by Han’s team is one of several proposed alternatives to the most popular one, CRISPR–Cas9.

The 20 authors of the Protein & Cell paper2 describe how they attempted without success to use NgAgo to edit a variety of genomes. Eight of the labs then tried again, adhering as closely as possible to Han’s experiment, using genetic materials provided by Han, targeting the same genes and also applying the technique to human cells. They all failed.

Beyond CRISPR: A guide to the many other ways to edit a genome

The paper urges Han’s team to “clarify the uncertainty surrounding NgAgo and provide all the necessary details for replicating the initial, very important results”. But one of the authors, Wensheng Wei, a molecular biologist at Peking University, has already made his mind up about NgAgo. “It simply doesn't work, period,” he says.

Zhang Xiaoxue, managing editor at Protein & Cell in Beijing, China — which also published the first report of gene-editing in human embryos in 2015 — says that the journal made an effort to publish the NgAgo paper quickly because of the ongoing debate over the work. “In China, it’s not just a scientific issue. It’s also an ethical and political issue,” she says.

The failed replications described in Nature Biotechnology4 were carried out by three more groups; all also used genetic materials provided by Han, targeted the same genes and applied the technique to human cells.

In the Cell Research paper3, researchers report an attempt to use NgAgo to edit a gene thought to be related to eye development in zebrafish embryos. Some of the embryos developed either one very small eye and one largely normal eye, or eyes that were fused and that formed, according to the paper, on the top of the head “like a cyclops”, as one would expect if NgAgo had knocked out the gene. But when the researchers sequenced the genomes of the fish, they found to their surprise that the gene was still intact.

The lead author, Liu Dong, a molecular biologist at Nantong University in China, offers an explanation: the NgAgo molecules clamp onto the genome, but instead of cutting the target gene, just reduce its expression. Because the NgAgo protein can be easily prepared in the laboratory, Liu says that this capability could make it a cheaper, more accessible alternative to current methods of temporarily blocking gene function in zebrafish. But if he is right, then NgAgo would not make permanent changes that are passed on to the next generation and would therefore not be considered a gene editor.

Liu offers little insight into the controversy over the original NgAgo experiments, which he notes were done in human cells in vitro. Rather, he says, it raises the possibility of a new use for NgAgo, as a cheap tool to block but not edit genes.

But critics say Liu’s paper is further evidence that the claims in the original NgAgo paper1 don’t stand up. “This is another report, now published in a peer-reviewed journal, confirming that NgAgo does not work as gene editor,” says Lluis Montoliu, a geneticist at the Spanish National Centre for Biotechnology in Madrid, who has previously criticized the Han paper. “This needs to be highlighted.”

Gaetan Burgio, a geneticist at the Australian National University in Canberra and one of the first to post online a failed attempt to replicate’s Han’s experiments, says he doesn’t think that NgAgo can function at the temperatures used in either Han’s or Liu’s experiment. Both were carried out at much cooler temperatures than the environment in which the protein’s source — a bacterium — lives.

CRISPR gene-editing tested in a person for the first time

Burgio thinks the zebrafish abnormalities might have formed because of a toxicity unrelated to the activity of NgAgo. Liu says his data convince him that NgAgo can reliably block genes, but acknowledges that he needs more evidence to show this conclusively. He says he is working on assembling that now.

Han told Nature that he has discovered a problem that would not have been obvious to others and that could explain why others are having difficulty replicating his results. He says that he is currently running confirmatory experiments so that he can publish data and a protocol that satisfy his critics. “I cannot say right now because the media in China jumps on everything I say,” he told Nature. “I need a little bit of time.”

Last week, in response to the NgAgo papers in Protein & Cell2 and Cell Research3, a spokesperson for Nature Biotechnology said that it had been contacted by a number of individuals and groups critical of Han’s NgAgo paper, and that it had considered or was considering them carefully, alongside any published critiques of the research.  “Our investigations into the paper are continuing at this time,” said the spokesperson. Following the publications in the journal on 28 November, a spokesperson told Nature that the journal has now carefully considered all comments relating to the original paper.

One of the few scientists who previously told Nature that he had corroborated Han’s findings — but has not published these results — now says that he is using NgAgo for experiments related to his research, and that he hopes to publish soon. But another who previously noted positive initial results with NgAgo says now that the “data are confusing” and “we cannot make a conclusion”. Neither wanted to be named for fear of being dragged into the controversy.

China’s bid to be a DNA superpower

The debacle has raised questions about a 224-million-yuan (US$32-million) gene-editing centre that Han’s university — Hebei University of Science and Technology — announced in August that it would build, to be paid for with local government money. “Without Han's Nature Biotechnology paper and the hype after that, it's impossible for the school to get such huge funding to establish the gene-editing research centre,” says Fang Shimin, a former biochemist who has become famous for exposing fraudulent scientists. He was one of the first to publicize criticism of Han’s paper.

He says that aside from Han’s NgAgo claims, the university lacks gene-editing expertise. So if Han's work doesn't stand up, “the centre will lose its legitimacy”.

Wei too is critical of the decision to build the gene-editing centre, which he also attributes to the excitement over Han's paper. “It’s not a bad idea to have one in China considering that it is such a hot area,” he says, “but the only reason such centre is built in Hebei is because of Han’s publication.”

The university has declined requests from Nature's news team to discuss the centre.