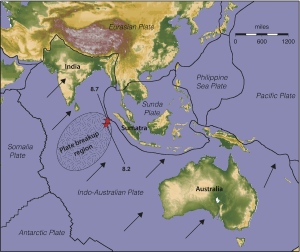 A pair of massive earthquakes that rocked the Indian Ocean on 11 April 2012 may signal the latest step in the formation of a new plate boundary within Earth’s surface.

Geological stresses rending the Indo-Australian plate apart are likely to have caused the magnitude-8.6 and magnitude-8.2 quakes, which broke along numerous faults and unleashed aftershocks for 6 days afterwards, according to three papers published online today in Nature1–3.

Seismologists have suspected since the 1980s4 that the Indo-Australian plate may be breaking up. But the 11 April earthquakes represent “the most spectacular example” of that process in action, says Matthias Delescluse, a geophysicist at the Ecole Normale Supérieure in Paris and lead author of the first paper1. Worldwide, “it’s the clearest example of newly formed plate boundaries,” he says.

According to prevailing theories of plate tectonics, the Indo-Australian plate began to deform internally about 10 million years ago. As the plate moved northwards, the region near India crunched against the Eurasian plate, thrusting the Himalayas up and slowing India down. Most scientists think that the Australian portion forged ahead, creating twisting tensions that are splitting the plate apart in the Indian Ocean.

Delescluse and his team inferred the presence of these seismic stresses by modelling stress changes from shortly before the 2012 earthquakes. They found that two earlier earthquakes along the eastern plate boundary — the magnitude-9.1 tremor in 2004 that unleashed a massive tsunami across the Indian Ocean, and another quake in 2005 — probably triggered the 2012 event by adding to pent-up stresses in the plate’s middle region.

Gregory Beroza, a seismologist at Stanford University in Palo Alto, California, says that the model is a likely explanation. “The 2004 and 2005 earthquakes by themselves would not have caused this other earthquake. There had to be other stresses,” he says.

Most large earthquakes occur when two plates collide at their boundaries, and one plate slides beneath the other. By contrast, when plates or portions of plates slip horizontally along a fault line, this usually results in smaller, 'strike-slip' earthquakes.

However, the first 11 April event defied expectations as the largest strike-slip earthquake on record, and one of the strongest to occur away from any conventional plate boundaries.

In the second study2, researchers found that the accumulated stresses spread over the plate’s interior broke free in the first 11 April event, resulting in one of the most complex fault patterns ever observed. Unlike most earthquakes that shake along a single fault, this one ruptured along four faults, one of which slipped as much as 20–30 metres.

“This earthquake, it was a ‘gee whiz’,” says study author Thorne Lay, a seismologist at the University of California, Santa Cruz.

Previous work had already identified multiple strike-slip faults for the magnitude-8.6 earthquake5, but no other study had analysed the slip amounts in such detail. Beroza says that Lay and his team “do a splendid job of picking apart this very important earthquake” in their paper.

Although much attention has focused on how the earthquakes played out, some researchers are also studying the after-effects of the giant tremor. In a third study3, scientists found that for six days following the event, earthquakes of magnitude 5.5 and greater occurred at almost five times their normal rate all around the world.

“Aftershocks are usually restricted to the immediate vicinity of a main shock,” says lead author Fred Pollitz, a geophysicist at the US Geological Survey in Menlo Park, California. He says that the 11 April example should challenge conventional definitions of how soon and how close aftershocks can occur to large earthquakes.

“Every earthquake is important to study, but this earthquake is rather unique,” says Hiroo Kanamori, a seismologist at the California Institute of Technology in Pasadena. With so many unusual characteristics to examine, the 11 April earthquake sequence may continue for some time to expand researchers’ ideas of how earthquakes can occur.