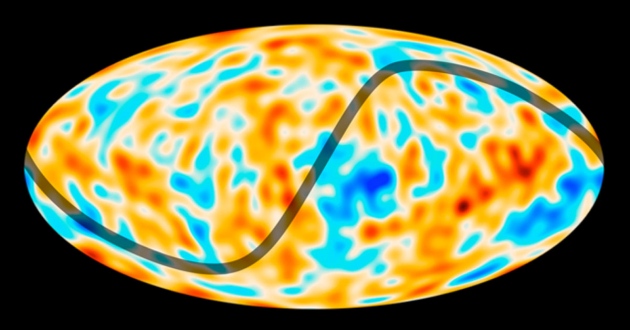 ESA and the Planck Collaboration

The temperature of the cosmic microwave background radiation fluctuates more on one side of the sky (the right side of this projection) than on the opposite side, a sign that space might be curved.

We live in a lopsided universe: That has been a lesson that cosmologists have learned from examining the detailed structure of the radiation left over from the Big Bang. Now, two cosmologists show that the data are consistent with a Universe that is curved slightly, similarly to a saddle. If their model is correct, it would overturn the long-held belief that the cosmos is flat.

On a large scale, precision measurements of the cosmic microwave background (CMB) by NASA’s Wilkinson Microwave Anisotropy Probe provided the first hints of an asymmetry in 2004. Some experts wondered whether the finding was a systematic error that would be corrected when the NASA probe’s successor, the European Space Agency’s Planck spacecraft, mapped the CMB again with higher precision. But the Planck results, announced earlier this year, confirmed the anomaly.

To explain those results, Andrew Liddle and Marina Cortês, both at the University of Edinburgh, UK, have now proposed a model of cosmic inflation — a hypothetical period of rapid expansion right after the Big Bang in which the Universe grew by many orders of magnitude in a small fraction of a second.

The simplest theory of inflation holds that the Universe is flat and that its expansion is driven by a single quantum field called the inflaton. In this model the inflaton has two roles: it triggers hyperexpansion and generates the tiny density fluctuations that enlarged to become the seeds of galaxies.

But this version of inflation cannot account for the Universe’s lopsidedness except as a statistical fluke — similar to, for example, a fair coin that happens to come up heads many more times than tails over 1,000 flips. If the CMB anomalies are not flukes, they could offer an unprecedented window on the detailed structure of the early universe, says Liddle.

In their paper, published this week in Physical Review Letters1, Liddle and Cortês tinker with inflation. Like many theorists before them, they invoke a second quantum field — the curvaton — to set the primordial density fluctuations in the infant Universe, restricting the inflaton to driving the era of hyperexpansion only.

The authors’ work is the first to explain the lopsidedness from first principles, says Adrienne Erickcek, a theorist at the University of North Carolina at Chapel Hill, who was not part of the study.

In Liddle and Cortês’s scenario, the asymmetry of the CMB would derive from a lack of uniformity on the very large scale of the Universe encoded in the curvaton field. In 2008, Erickcek and her colleagues proposed a similar mechanism2. That model, however, did not invoke a negatively curved Universe.

Although numerous observations indicate that the cosmos is indeed flat, the deviations in the CMB data predicted by latest model — which the authors acknowledge is still speculative — could be small enough to fit within the limits imposed by measurements with the Planck satellite, says Liddle. Future experiments with measurements of improved precision however might determine who is right.