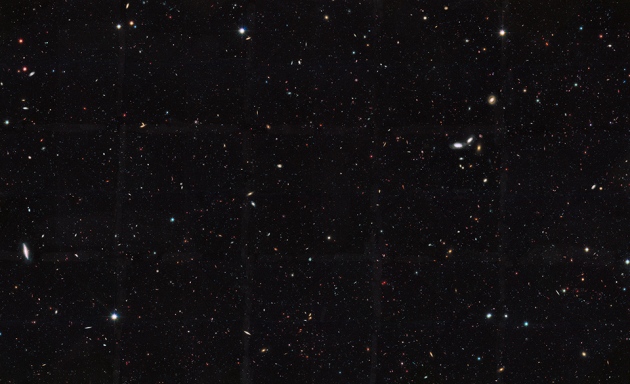 A slice of the observable Universe, as seen with the Hubble Space Telescope.

The observable Universe contains about 2 trillion galaxies — more than ten times as many as previously estimated, according to the first significant revision of the count in two decades1.

Since the mid-1990s, the working estimate for the number of galaxies in the Universe has been around 120 billion. That number was based mainly on a 1996 study called Hubble Deep Field2, in which researchers pointed the Hubble Space Telescope at a small region of space for a total of ten days, so that the long exposure would reveal extremely faint objects.

This view encompassed galaxies up to 3.7 billion parsecs (12 billion light years) away, which appear to us as they existed less than 2 billion years after the Big Bang. Astrophysicists then counted the galaxies within that narrow field of view and extrapolated the number to the full sky — under the assumption that it would look similar in all directions — to get the figure of 120 billion.

However, there weren’t enough galaxies in the Hubble Deep Field image to account for the density of matter distributed throughout the Universe. Researchers knew that the missing matter had to be in the form of galaxies too faint to see, as gas and dark matter. “We always knew there were going to be more galaxies than that,” says astrophysicist Christopher Conselice of the University of Nottingham, UK, a co-author of the latest estimate. “But we didn’t know how many existed because we couldn’t image them.”

More recent deep-field studies conducted using Hubble — including after NASA upgraded the observatory in 2009 — and other telescopes enabled Conselice and his collaborators to count visible galaxies out to distances of 4 billion parsecs (13 billion light years). The researchers were able to plot the number of galaxies of a given mass that corresponded to various distances away from Earth. They then extrapolated their estimates to account for galaxies too small and faint for telescopes to pick up, and calculated that the observable Universe should contain 2 trillion galaxies. The paper1 has been accepted for publication in The Astrophysical Journal.

The team’s count was not too surprising, says astronomer Steven Finkelstein of the University of Texas at Austin, but it is still helpful to have a number. “I don't know of anyone who has done this before,” he says. Conselice says that theorists had expected the number to be even higher; he and his collaborators now plan to look into the discrepancy.

At present, researchers can directly observe only about 10% of the 2 trillion galaxies. But that will change in two years, when Hubble’s successor, the James Webb Space Telescope, is deployed, Conselice says. That telescope should also be able to peer much further back in time, to see how galaxies started to form, he adds.

The study might lead to an improved understanding of galaxies by refining simulations of galaxy formation and enabling more detailed assessments of how they grow.

But for now, the results are consistent with the general theory of how galaxies form, in which most start very small, and then undergo a furious period of mergers and acquisitions, says Debra Elmegreen, an astronomer at Vassar College in Poughkeepsie, New York.

Because it takes so long for light from galaxies in the far reaches of  the Universe to reach Earth, the picture we see today is a snapshot in time, and many of the galaxies included in the new estimate no longer exist. They have probably merged into larger galaxies — so the current number of galaxies that actually exist now is expected to be much lower than 2 trillion.