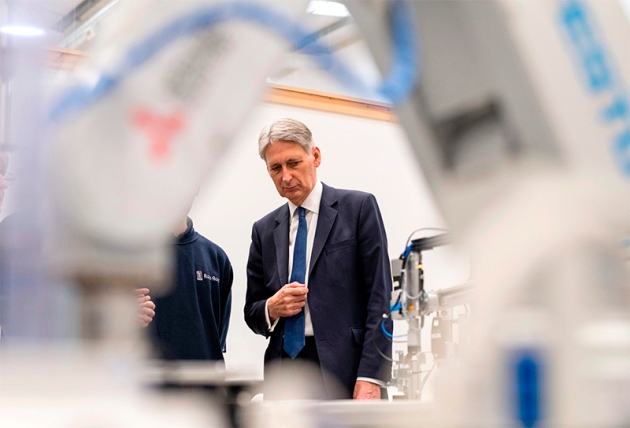 The United Kingdom has laid out how it will pour money into research to boost its economy — including cash for artificial intelligence and other high-tech industries — as the country prepares to leave the European Union in 2019.

Science does not usually sit at the forefront of British economic-policy documents. But the UK government’s new industrial strategy, released on 27 November, is sprinkled liberally with references to research and development (R&D) throughout, emphasizing the government’s increasing focus on research as a remedy for economic woes. “It feels like science permeates this strategy,” says Graeme Reid, a science-policy researcher at University College London.

The shift in emphasis is positive, but it will come with expectations, says Paul Nightingale, deputy director of the Science Policy Research Unit at the University of Sussex in Brighton, UK. Historically, commercializing research has not been seen as a strength of the UK universities system. But in return for more R&D cash, universities will now be expected to improve how they interact with local businesses and people, and to increase their commercial focus, he says. “This isn’t ‘strings attached’, this is ropes. My impression from talking to lots of academics is that they don’t understand how big this is,” he says.

The industrial strategy is an effort to boost the United Kingdom’s levels of worker productivity — the output per hour worked in the economy — which has remained stagnant since the financial crisis and lags behind those of other industrialized nations. In part to counter that trend, the Conservative government has promised to massively boost the country’s R&D spending over the next decade: from 1.7% of gross domestic product (GDP) in 2015 to 2.4% by 2027. (By comparison, Germany already spends 2.9% of GDP on research; the United States, 2.8%).

UK scientists have already been promised boosts in public spending. Last year, politicians committed to yearly increases in research funding until 2020–21, and last week, they announced that they would continue that increase in 2021–22, raising public research funds by a further £500 million (US$667 million), to £12.5 billion. To raise private spending, the government promises to work with industry to produce a road map in the coming months; UK chancellor Philip Hammond made a start by announcing a rise in R&D tax credits (from 11% to 12%) in last week’s budget.

The industrial strategy has now picked out some specific areas on which to splash the cash. In particular, it identifies four ‘grand challenges’ in high-tech fields, which were agreed on after consultation with scientists: artificial intelligence (AI) and big data; clean growth; the future of mobility; and meeting the needs of an ageing society. These areas will benefit from an additional £725 million to be spent over the next 4 years from the Industrial Strategy Challenge Fund (ISCF) — a cash pot that has allocated £1 billion since its launch last year. Meanwhile, some £45 million will be spent to support more PhD students in AI and related disciplines, the strategy adds, increasing numbers by at least 200 places a year by 2020–21. And as parts of its efforts to address regional inequality, the government will launch a £115 million ‘Strength in Places Fund’ to support local pockets of excellence in science and innovation.

Other measures likely to directly affect academic scientists include a promised boost to a stream of funding that is allocated directly to universities, and spent at their discretion. This ‘quality-related’ funding (so named because it is allocated according to an audit of the quality of university research) is crucial for blue-skies and basic research, but has remained largely unchanged since 2010. An unspecified stream of money is also promised for a competitive fund designed to support multi- and interdisciplinary research that was proposed in a 2015 review by Nobel laureate Paul Nurse.

The strategy mentions a plethora of technology-based schemes, including unspecified ‘sector deals’ with industry to drive productivity in areas such as life sciences and automotive industries. It is likely that the government will not have enough capacity to manage them all internally, says Kieron Flanagan, a science-policy researcher at the Alliance Manchester Business School, UK.

Flanagan thinks that this will ultimately put greater responsibility into the hands of UK Research and Innovation (UKRI), an overarching organization that from 2018 will consolidate and oversee the activities of nine existing UK funding agencies, including both basic funding and commercially-focused innovation. If the organization ends up steering the direction of more industrial R&D, "it makes UKRI a uniquely powerful beast”, he says.