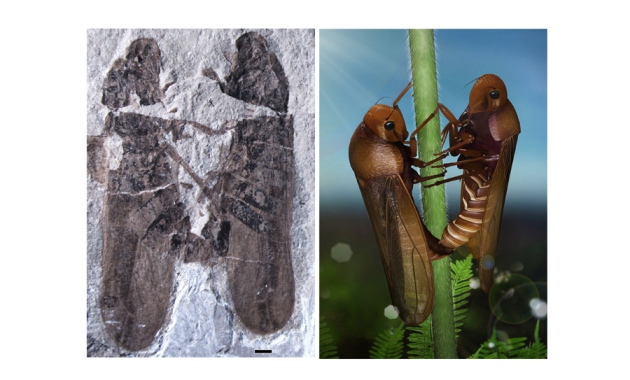 This fossil (left, with a computer reconstruction at right) of a pair of Anthoscytina perpetua is the earliest record of mating insects.

The moment the petite mort becomes a grand mort has been captured again.

This pair of tiny insects — 15-millimetre-long froghoppers (Anthoscytina perpetua) from the Middle Jurassic — has now joined the ranks of animals fossilized at the moment of sexual intercourse.

Dong Ren, curator of insect fossils at the Capital Normal University in Beijing, and his colleagues scoured more than 1,200 fossilized froghopper specimens from Inner Mongolia and found only one pair of permanently linked lovers.

Although it will doubtless be scant consolation to these two individuals locked together belly to belly, they have become the oldest known fossil of copulating insects, reports Ren's team in PLoS ONE1. And they suggest that froghoppers do not favour sexual experimentation: modern relatives of these ancient animals still mate using a similar choreography.

Or, as Ren and his team write, the animals’ “genitalic symmetry and mating position have remained static for over 165 million years”.