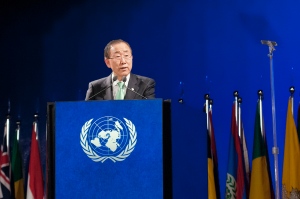 UN secretary-general Ban Ki-moon will get scientific advice from a panel run by UNESCO.

The UN secretary-general, Ban Ki-moon, has agreed to set up an international scientific advisory board to provide him with guidance on science-related issues, and enable him to provide advice to UN member states on such issues.

The move was announced last Friday (22 June) at the UN Conference on Sustainable Development (Rio+20) by Irina Bokova, director-general of the UN Environmental, Scientific and Cultural Organization (UNESCO).

She said that UNESCO had been asked to take the leadership in setting up the council, and also provide its secretariat.

The board will bring together eminent specialists from the natural sciences, the social and human sciences and engineering, and representing diverse backgrounds and regions.

One of its key functions will be to promote cooperation on science-related issue between UN agencies, and with the international scientific community.

Earlier this year, a high level panel on sustainability — established by the secretary-general — proposed either creating a scientific board or appointing a chief scientific adviser.

A small group of experts, from organisations such as UNESCO and the International Council for Science (ICSU), began investigating how to take these recommendations forward.

Gretchen Kalonji, assistant director-general for natural sciences at UNESCO, told SciDev.Net that it was still too early to say how much the advisory board would cost, who would fund it, or how the proposed chief scientific adviser would liaise between the board and the secretary-general.

Amina Mohamed, UN assistant secretary-general and deputy director of the UN Environment Programme (UNEP), told SciDev.Net that she hoped UNEP would be part of the panel.

"We have a mandate for a new science and policy interface coming out of [Rio+20], and intend to invest in the mandate and make sure we put in place the mechanisms and resources to take this forward."

It was hoped that funding for the council would be supplied by the UN, donors, foundations and other institutions, she added.

Mohamed emphasized the importance of developing countries being adequately represented on the panel. "Any panel set up at the UN has to be representative of the membership of the UN, otherwise it would face issues of legitimacy," she said.

Bob Watson, chief scientific adviser at the UK Department of Food, Environment and Rural Affairs (DEFRA), told SciDev.Net that the cost of providing advisors would be "peanuts" compared to the magnitude of the decisions facing the UN.

There would inevitably be "some level of politics" in appointing regional representatives, Watson added.

But he said that he was "very optimistic" that it would be possible to put together a panel that would be "truly scientifically independent", warning that "otherwise it has no credibility".