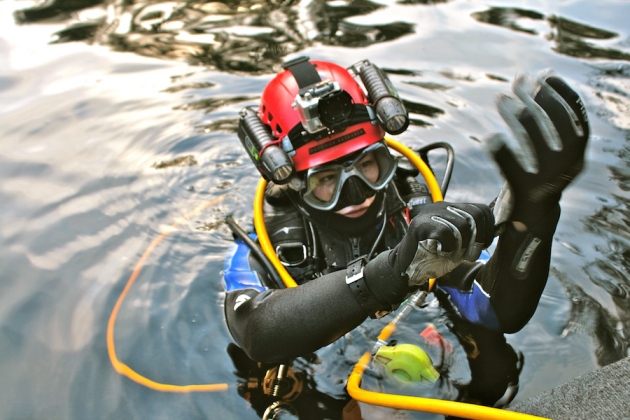 Researchers diving in a Florida river found stone tools showing humans were in the Americas 14,550 years ago.

Scuba-diving archaeologists have unearthed artefacts from an ancient butchering site that seem to settle a debate about when humans spread across the Americas.

Working in the murk of a river in Florida, the team found stone tools dating back 14,550 years that could have been used to carve up ancient elephant-like beasts called mastodons, whose remains have been recovered from the same site.

The findings, published today in Science Advances1, add to ever-growing evidence that humans were living in much of the Americas well before the cultural group known as Clovis were present about 13,000 years ago. The alternative theory — that the Clovis group were the first Americans — has been increasingly disputed.

“I think this paper is a triumph for underwater archaeology and yet another nail in the coffin of the Clovis-first theory,” says Jon Erlandson, an anthropologist at the University of Oregon in Eugene.

The site was originally a sinkhole with a pond in the centre, but it has since been covered by the Aucilla River. Using hand trowels, laser levels and a suction tube to draw disturbed sediment to the surface for screening, the underwater archaeologists found six stone artefacts that had clearly been made by people. One — a knife fragment (pictured) — was surrounded by bits of organic material that were dated to 14,550 years ago by radiocarbon testing. 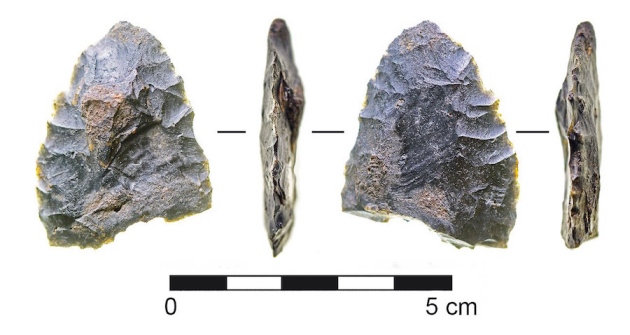 The 'biface' knife recovered from the ancient sinkhole could have been used to carve up large animals.

In addition, a mastodon tusk of the same age found at the site years ago by another team shows clear marks that the researchers attributed to efforts by people to remove the tusk from the head. Daniel Fisher, a palaeontologist at the University of Michigan in Ann Arbor and an author of the latest study, reanalysed the tusk and agrees that the marks were probably caused by butchering, most likely to extract the roughly 7 kilograms of nutritious tissue that would have been found inside.

Fisher and his team also looked for evidence of large animals by examining the sediment in the old pond for spores of Sporormiella, a fungus that lives on the dung of herbivores. Researchers have suggested that human hunting might have quickly driven animals such as the mastodon to extinction, but the spores were most abundant 13,700 years ago and did not disappear until around 12,600 years ago. This suggests that people were living with these large animals for a few thousand years before the animals went extinct.

Fisher says that it isn't clear whether the knife-wielders killed the mastodon or simply scavenged the carcass, but “however humans and mastodons interacted, it took at least two millennia for the process of extinction to run to completion”.

With evidence of other clearly pre-Clovis sites in Chile and Oregon2, 3, many people are now convinced that humans had made it to Florida as far back as 14,550 years ago.

There are still some sceptics about the Florida dates. Donald Grayson, an anthropologist at the University of Washington, worries that dates from the site might have been contaminated by ancient carbon from the huge aquifer that sits under much of Florida. “I see no reason to accept their radiocarbon dates as accurate,” he says.

But Michael Waters, an anthropologist at Texas A&M University in College Station and another author of the latest paper, dismisses Grayson’s concerns, for reasons including that samples were treated to remove soluble contaminants. “For some reason, there is still great resistance to the concept of pre-Clovis,” he says. “The data are strong.”

David Madsen, an archaeologist at the University of Texas at Austin known for reserving judgement on when the Americas were first colonized, is convinced. He thinks that it is now time to re-examine a host of sites that were dated to before 13,500 years ago but dismissed because “the idea the first Americans were Clovis age was so pervasive”.

“Now that the Clovis-first paradigm has been largely refuted it may be possible to revalidate the original evidence from those sites with careful work, using more modern techniques,” Madsen says. 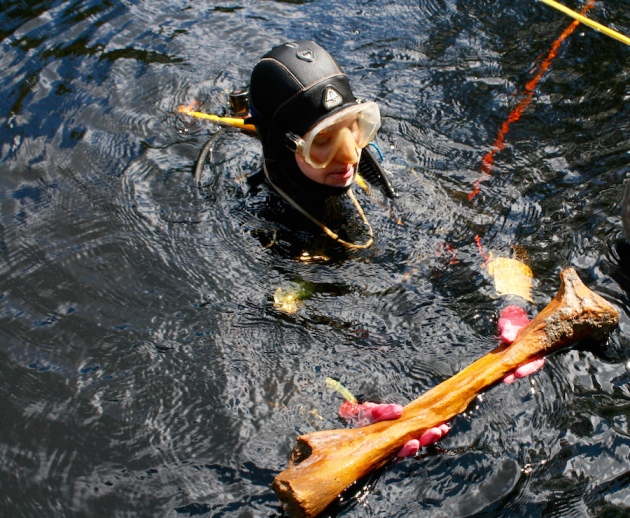 Bones, such as the mastodon limb bone shown here being brought to the surface, were found along with the stone tools.