The submersible completed four dives in polar waters in July 2014.

Although 2014 has not been kind to rockets, it has been a banner year for robots of all stripes. NASA’s Curiosity rover sniffed out signs of methane on Mars; the European Space Agency dropped a washing-machine-sized lander onto a comet. And in July, researchers used a robotic diver to probe one of the most inaccessible parts of the planet — the seas under polar ice.

The results from those tests of the Nereid Under Ice (NUI) vehicle were released on 16 December at a meeting of the American Geophysical Union in San Francisco, California.

During its four Arctic dives, the submersible captured images of brown algae growing on the bottom of sea ice, while giant copepod crustaceans and swarms of gelatinous larvaceans swam beneath the floes. “It was the first time we could document such an abundance of life under the ice,” says Antje Boetius, a marine biologist at the Alfred Wegener Institute Helmholtz Center for Polar and Marine Research in Bremerhaven, Germany, and chief scientist of the expedition, which was conducted using the German icebreaker Polarstern.

In the past, the environment below sea ice has been studied by autonomous gliders that follow preset directions, and by experiments that lower instruments through drill holes. NUI can explore in three dimensions in a way that was not possible before, says Chris German, a marine geochemist at the Woods Hole Oceanographic Institution (WHOI) in Massachusetts and a principal investigator of the NUI project.

The extra capability to map, collect samples and explore visually “is like going from a caveman painting to a Monet”, he says. 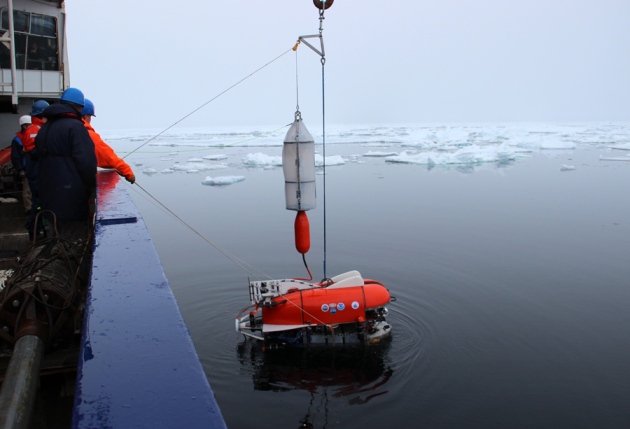 Nereid, which cost US$3 million to build, has travelled up to 800 metres from its support ship.

Built by WHOI for approximately US$3 million, NUI is based on the design of the Nereus remotely operated underwater vehicle, which in 2009 dived to the bottom of Challenger Deep, the lowest point in the ocean. Nereus was lost at sea in May, apparently because of an implosion caused by extreme pressures at a depth of 10 kilometres.

Like Nereus, NUI gets commands through a thin fibre-optic cable that connects the vehicle to a support ship. Pilots can send commands to the vehicle and receive video and other data through the connection. Because the cable is prone to breaking, NUI is programmed to follow pre-set instructions when it loses communication with the ship. In three of the four Arctic dives, the cable broke and researchers aboard the Polarstern successfully recovered NUI by sending it acoustic signals.

During the dives, NUI travelled a maximum of 800 metres from the ship. Its spools hold 40 kilometres of fibre-optic cable, so WHOI has plans to explore up to 20 kilometres from its support ship in future under-ice tests. Eventually, the team hopes to use NUI to study the underside of glaciers and ice shelves, including those in Antarctica that are rapidly retreating.