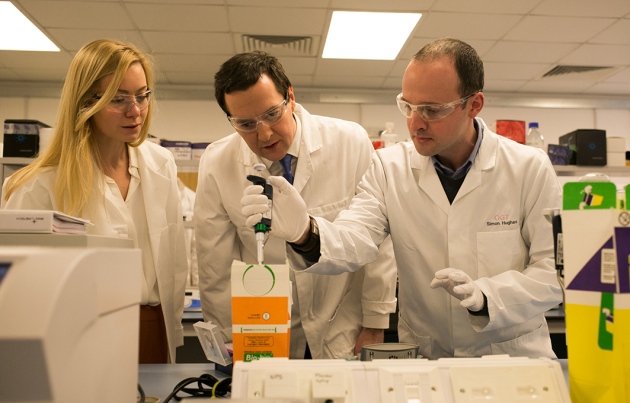 Uncertainty is haunting UK science. On 25 November, the Conservative government that won a parliamentary majority in May will announce its first spending review — and researchers have no idea what to expect.

Many hold that the science budget desperately needs to increase, and there is renewed pressure to implement a rise from an influential group of politicians. Current investment from both business and government is well below 2% of gross domestic product (GDP). That should be increased to 3%, an internationally recognized target, to safeguard productivity, warned the House of Commons committee on science and technology on 9 November, following an investigation into research spending.

“We need to have that increase,” says Nicola Blackwood, the Conservative Member of Parliament who heads the committee. “We need a road map to the 3% target.”

But despite pleas for more cash, the goal of the spending review — to reduce overall government outgoings by £20 billion (US$30 billion) by 2020 — does not give most researchers hope. If the science budget is part of the trimming — or if it remains flat, as occurred in the previous comprehensive spending review in 2010 — many say that science will suffer.

“We are so lean now I really can’t take anything else out,” says Michael Wakelam, director of the Babraham Institute, a life-sciences research centre near Cambridge. Even a flat budget would mean that he could not replace staff who leave and that the quality of research at the institute would decline, he says.

Intensifying the uncertainty is a government proposal announced on 6 November to axe the Higher Education Funding Council for England, which doles out around £1.6 billion each year to universities for research; scientists are also awaiting the results of a government-commissioned review into the seven UK research councils, which dish out a further £3 billion.

The 2010 spending review kept the core science budget frozen at £4.6 billion a year for five years, and slashed a smaller budget for science infrastructure by almost half.

The result was a relief to researchers because the government — then a coalition between the Conservatives and the Liberal Democrats — had committed to substantial cuts in public spending ahead of the review. David Willetts, science minister at the time, even received flowers from the founder of Research Fortnight magazine in the wake of the announcement, for his role in protecting science.

Although cash for infrastructure has increased since then, inflation has eroded the core science budget, forcing researchers to cut back. Another five years of the same would now be extremely difficult, says Alison Davenport, who is chair of the independent scientific advisory board to the Science and Technology Facilities Council, and provided evidence about the impact of frozen science funding to Blackwood’s parliamentary committee.

Another freeze on science funding “will lead to an accelerated decline with serious and irreversible damage to particle physics”, Davenport warned the committee. In one scenario that she considered, Britain’s flagship X-ray synchrotron, the Diamond Light Source, would operate at 70% of its optimum capacity, the national Central Laser Facility at 50%, and the ISIS neutron source would need to shut down by 2019.

There are also “serious concerns”, says Davenport, that there will not be enough resources to analyse the data coming in from major astronomy projects and the Large Hadron Collider.

The government, however, may not appreciate the impact of a flat budget this time, says Nick Hillman, director of the Higher Education Policy Institute in Oxford, particularly because people regarded it as positive in 2010.

Even worse than a frozen budget would be cuts. That fear has been stoked by the government’s demand in July that before the spending review, almost all departments — including that for Business, Innovation and Skills, which manages most of the government-supported science budget — model scenarios in which their budgets are cut by 25% and 40%.

Few think that cuts to the science budget would reach even 25%. Still, at least one major funder, the Medical Research Council, believes that there is a risk that its funds could be cut and has examined various possible scenarios, according to the minutes of a July meeting.

Worried researchers have started taking action: more than 1,000 have written to the government through the Science is Vital campaign. Astrophysicist Phil Evans of the University of Leicester warned in his message that skilled academics are leaving the country because they cannot find jobs; others detailed how their own research contributes to the UK economy.

‘Backdoor’ cuts, says Kieron Flanagan, a science-policy researcher at the Alliance Manchester Business School, could include stretching the science budget to cover areas such as innovation, which is currently separate, or cutting the research councils’ administrative budgets.

Further uncertainty comes in the form of the characters behind the review. The highly respected Willetts is gone, and the current science minister, Jo Johnson, was notably unimpressed by the notion that Britain should be spending 3% of its GDP on research, describing it as “a nice round number, more than anything else” when he appeared before Blackwood’s committee.

Chancellor of the Exchequer George Osborne, who holds the purse strings and is seen as the architect of the government’s economic austerity programme, has consistently claimed to support science. Osborne got kudos for sparing science in the last review — and for increasing research-infrastructure spending since then. “It would be very odd to spend your first five years as chancellor saying, ‘I’m the chancellor for science’,” says Hillman, “and then to not see that through in the second term.”

Any science spending boost might come with strings attached. Innovation and regional growth are likely to be priorities of future science spending, says Paul Nightingale, deputy director of the Science Policy Research Unit at the University of Sussex in Brighton. So Osborne might continue a trend, established under the last government, of allocating funding directly from the treasury to projects outside London, such as the UK National Graphene Institute at the University of Manchester, in an effort to boost regional economies.