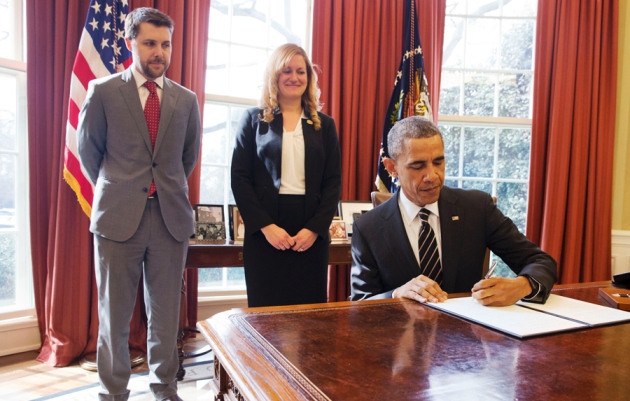 On 19 March, US President Barack Obama signed an executive order to cut the government's greenhouse emissions.

The United States officially pledged on 31 March to reduce its greenhouse-gas emissions to 26–28% below 2005 levels by 2025, meeting the United Nations' recommended deadline for submissions. These contributions will serve as the basis for negotiations at the UN global-warming summit in Paris this December. The European Union (EU) and several nations have also filed pledges, with most remaining countries expected to submit their climate plans to the UN Framework Convention on Climate Change during the second quarter of the year.

“This submission is ambitious and achievable within existing legal authority,” Brian Deese, senior adviser to US President Barack Obama, told reporters during a conference call.

The US submission is a formal recognition of the deal it struck in November with China, which committed to levelling off emissions growth around 2030. Environmentalists generally praised the White House for doing what it can — in the face of Republican opposition — to reduce emissions, which have dropped during the past several years due in part to an expansion of natural-gas production and a shift away from coal-fired generation of electricity.

The agreement adopted at the UN climate conference in Lima last December encouraged “those parties ready to do so” to submit their pledges by the end of March. The countries that have submitted pledges so far account for about one-third of annual global carbon dioxide emissions from energy consumption.

“Obviously, it would have been preferable if more countries, particularly more developed countries such as Japan, Canada and Australia, had met the deadline,” says Alden Meyer, director of strategy and policy at the Union of Concerned Scientists. “But I think it’s okay, as long as countries keep moving forward and the proposals keep coming in.”

Russia also submitted its pledge on 31 March, committing to reduce greenhouse-gas emissions to 25–30% below 1990 levels by 2030. If the carbon-absorbing capacity of its forests is taken into account, the country could achieve a 70–75% reduction in emissions.

On 6 March, the EU formalized its pledge, announced in October, to reduce emissions to 40% below 1990 levels by 2030. Norway matched the EU commitment in its submission. Mexico pledged to level off its emissions around 2026 and said it will reduce them further if the world reaches a firm climate agreement in Paris. Switzerland, which submitted the first pledge on 27 February, committed to reduce its emissions to 50% below 1990 levels by 2030.

Climate Action Tracker, a Berlin-based consortium of researchers that tracks national commitments, conducted an initial assessment of the current submissions. The assessment focuses on different measures of 'fairness' and what each country must do to meet the collective goal of limiting the global average temperature to 2 °C above pre-industrial levels. Its assessment of Russia's pledge is still in progress, but the group gave the rest of the pledges, as well as the commitment China announced in its deal with the United States, a 'medium' rating. If all pending submissions receive a similar rank, the world will be on track to breach the 2 °C target, the group says.

Brazil, India and Indonesia are expected to follow Mexico by submitting both an unconditional pledge and a stronger, conditional pledge that goes further if developed countries are willing to step up their commitments, Meyer says. These conditional pledges will make debates over climate funding and technology transfer more concrete, he says, but it will be difficult to achieve a broad commitment to further reductions in Paris.

“This is going to take more time to play out,” he says. “No one thinks we’re going to get the whole job done in Paris.”

This story has been updated.