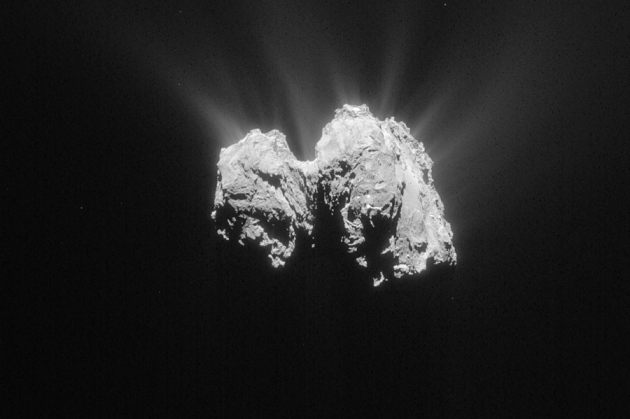 A shot of the comet seen on 3 May from Rosetta's navigation camera at a distance of 135 kilometres.

An unexpected culprit is breaking up molecules of water and carbon dioxide in the atmosphere around comet 67P/Churyumov-Gerasimenko.

Data obtained by the Rosetta probe orbiting the comet show that not only is this process taking place within a few hundred metres of the comet’s surface, it is caused by electrons, rather than the photons scientists might have expected.

“It was a great surprise,” says Paul Feldman, an astronomer at Johns Hopkins University in Baltimore, Maryland, who led the study. The findings were published online in Astronomy and Astrophysics on 2 June1.

Comets spit out water and carbon dioxide in jets or plumes as the objects heat up on approach to the Sun. The gases carry dust away with them to form the object’s fuzzy atmosphere and distinctive tail. As they do, ultraviolet light from the Sun splits these molecules into their constituent atoms. Atoms of hydrogen, oxygen and carbon all absorb and emit photons at ultraviolet wavelengths. By watching for this tell-tale glow, NASA’s Hubble Space Telescope has spotted these elements from its Earth orbit, but only at very low resolution in large clouds of gas and thousands of kilometres from the comet’s surface.

The European Space Agency's Rosetta mission now in orbit around 67P is giving researchers a much closer view using NASA’s Alice ultraviolet spectrograph. During Rosetta’s first four months around the comet, Feldman's team found that, while they could not see any atoms split by ultraviolet rays, they instead saw energetic electrons creating lone atoms of oxygen, hydrogen and carbon, close to the comet's surface.

A glow in the dark

Alice uses the characteristic wavelengths at which these excited atoms glow to chart the comet’s makeup at a resolution of tens of metres by analysing light from 67P. The relative intensities of wavelengths of light in the atoms' spectra tell researchers the proportions in which the atoms were created. In this case, Feldman says it allowed his team to deduce that the atoms were split from their molecules by electrons, rather than photons, which left them in an excited state Alice could observe. Photons are still ultimately the likely cause, however, as the energetic electrons must have originally been stripped from other molecules when hit by ultraviolet from the Sun, he adds.

Some researchers feared that Alice would struggle to detect these atomic constituents because, so close to the comet, the gas would not be dense enough for it to glow like the clouds Hubble saw. Although this proved to be the case, the surprisingly large amount of splitting via electrons caused the atoms to show up anyway.

“These are wonderful results," says Nick Schneider, an astronomer at the University of Colorado in Boulder who works on a similar instrument on NASA’s MAVEN mission to Mars. "What a great opportunity to watch the comet come alive from close up."

Alice could now be used to trace plumes of gases to their sources on the surface of the comet, adds Feldman. While once scientists saw comets as ‘dirty iceballs’ spewing ice and dust from all over, they now know that gas emerges only in plumes, which vary in composition across the comet. Tracing these plumes back to surface features and analysing those regions with other Rosetta instruments should lead to “great progress” towards understanding how comets formed billions of years ago, adds Schneider.