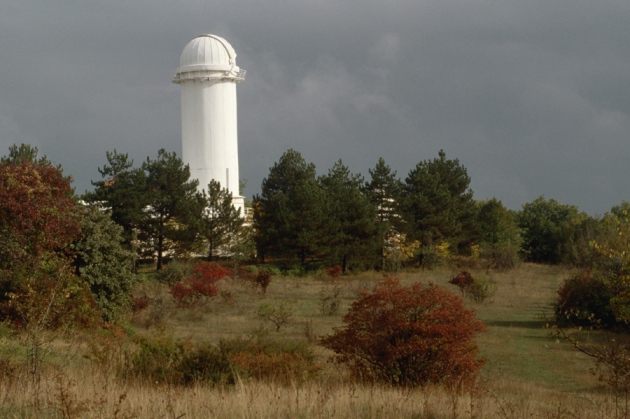 The Crimean Astrophysical Observatory in Nauchny is one of many institutes in Crimea that will now be taken over by the Russian Academy of Sciences.

With political chaos playing out around them, researchers in Ukraine and the freshly annexed region of Crimea are facing their own upheavals. Many Crimean institutes are looking to their new Russian master for signs of what is to come, and Ukraine’s scientists can already see cuts heading their way.

The interim government in Ukraine, set up after the ousting of President Viktor Yanukovych on 22 February, has now declared a 100-day programme to reform education and research along meritocratic Western lines before the presidential elections on 25 May. But the country’s austerity budget, agreed on 27 March, will see researchers lose up to one-third of their already low funding (which totalled US$227 million in 2013) as Ukraine seeks to secure foreign loans to prioritize support for the army.

“Things are not going well,” says Nataliya Shulga, a molecular biologist at the National Pedagogical Dragomanov University in Kiev, who runs the Ukrainian Science Club, a lobby group.

Unsure of what the future holds, research institutes and universities in Crimea have requested takeover by Russian institutions, the relative wealth and stability of which are attractive. And Ukraine’s interim government now accepts that its reform programme will not cover Crimean scientists. The Crimean Astrophysical Observatory in Nauchny, part of the University of Kiev, is one of around 100 science centres that are transferring to the Russian Academy of Sciences. Observatory staff received their final Ukrainian pay cheques last month.

For some, this is unsettling. “We really don’t know what will happen at all, and we are reluctant to orientate ourselves to internal grants in Russia because of the international sanctions,” says zoologist Gregory Prokopov from Taurida National V. I. Vernadsky University in Simferopol, Crimea.

But many Crimean scientists are more than happy about the change. Alla Rostopchina, director of the Crimean Astrophysical Observatory, says that it was an immediate decision to request admission to the Russian Academy of Sciences. The observatory, she says, has “long and strong” relationships with Russian astronomy, and she anticipates practical benefits. “First of all we hope to update our instrumentation, and we look forward to fuller participation in Russian space projects,” she says. But she also hopes to maintain collaborations with Western scientists.

Yet the shift eastwards might not be straightforward. At a meeting of the Russian Academy of Sciences’ executive committee on 25 March, its president Vladimir Fortov pledged not to interfere with the academic work of its new Crimean institutes, but noted that it would cost the academy 5 billion rubles (US$140 million) a year to operate them. And Yaroslav Yatskiv, director of the Main Astronomical Observatory of the National Academy of Sciences of Ukraine (NASU) in Kiev, points out that it “might be hard for the [Russian] academy to receive the institutes since it is itself in the midst of reform”. However, herpetologist Oleg Kukushkin of the NASU’s Karadag Nature Reserve in southeast Crimea, claims that the NASU has been inefficient and bureaucratic, and says that research at the reserve would be best protected by moving to the Russian academy. “It would be the optimal and most logical decision,” he says.

Elsewhere in Ukraine, the post-revolution euphoria and ambitions for rapid reforms of science governance have been dampened. And hopes are fading that the NASU, which comprises more than 500 members and runs about 170 research institutes and centres, would agree to modernizations that many say are crucial. This week, it postponed the planned elections of a new executive council until the autumn because of the political instability in Ukraine. NASU president Boris Paton, 95, who has been in office for 52 years, will now retain his role until next year.

Young researchers would like to see an end to this gerontocracy. Oleksandr Skorokhod, a PhD student at the Institute of Molecular Biology and Genetics in Kiev, is part of a newly organized network called the NASU Council of Young Scientists. Its members are lobbying effectively for systemic changes to improve the long-term health of Ukrainian science.

The network has also been included in the education ministry’s broad consultation process on the draft reforms. The reforms are being packaged into a new higher-education law, as well as into a revision to an existing science law. They include, for example, substituting the two Soviet-style higher degrees — candidate of science and doctor of science — with a PhD, which will be awarded by universities rather than the academy. The reforms would also impose Western-style standards for accrediting universities, and create an independent grants agency.

Shulga says that the reforms are being slowed down by the NASU because “most academy members are powerful and resistant to change”. Other scientists point out that resistance is encouraged by the generous lifelong stipend each member enjoys.

But Sergei Mosyakin, a corresponding member of the NASU and an ecologist at the M. G. Kholodny Institute of Botany in Kiev, says that the situation is not that simple. “The budget of the academy will be cut, so there will be no possibility of a real and productive large-scale reform. The general consensus is that the changes are inevitable, but they should be evolutionary.”

The photograph that originally accompanied this story did not show the Crimean Astrophysical Observatory in Nauchny but a military radar station in Crimea. The image has now been changed.