Britain has set out a road map towards the first clinical tests of reproductive techniques that combine parents’ genes with DNA from a third party. The approach raises ethical questions, but could spare children from inheriting some rare diseases, including forms of muscular dystrophy and neurodegenerative disorders that affect around 1 in 5,000 people.

These conditions are caused by defects in the mitochondria, the ‘power packs’ of the cell, which are inherited from a child’s mother through the egg. Experiments on primates, and with defective human eggs, have already shown that genetic material can be removed from an egg that has faulty mitochondria and transferred to a healthy donor ovum, leaving the flawed mitochondrial DNA behind. In principle, the resulting egg could then develop into a healthy child carrying both the parents’ nuclear genes and mitochondrial DNA from the donor. But the work amounts to genetic modification of embryos — which is currently illegal in the United Kingdom — and also involves destroying fertilized eggs.

On 19 January, the UK government’s Human Fertilisation and Embryology Authority (HFEA) announced a public consultation on the process, the first step towards making it legal. Simultaneously, the country’s biggest biomedical charity, the Wellcome Trust, said that it would fund preclinical experiments to gauge the safety of the techniques. An independent bioethical review is also in progress. “It’s a wonderful example of how regulation should work, because it’s saying let’s see the science, let’s see the bioethics, let’s find out what the public thinks,” says Peter Braude, a reproductive biologist at King’s College London. 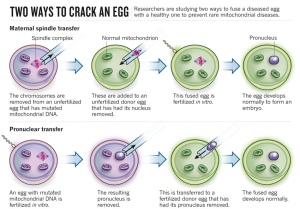 In 2011, Braude co-authored a report for the HFEA that concluded that the nuclear transfer procedures seem safe on the basis of current research. The report outlined several studies that it deemed “critical” before either procedure could be used to create a child. These include experiments on healthy human eggs, and proof that the pronuclear transfer technique can conceive healthy monkeys.

The Wellcome Trust has now awarded Turnbull £4.4 million (US$6.8 million), which his university has topped up with another £1.4 million, to perform the procedures on healthy human eggs. Turnbull and his team hope to determine whether the embryos can safely reach the 100-cell blastocyst stage, when implantation occurs. Yet they have no plans to test pronuclear transfer in monkeys, and it is unclear who would conduct such experiments.

Shoukhrat Mitalipov, a reproductive biologist at Oregon Health and Science University near Portland, who led the work on rhesus monkeys, says that his lab uses the maternal spindle transfer technique because it is easier to perform. Mitalipov has begun experiments on human eggs in a privately funded lab. Such work is barred from receiving federal funds because it involves the destruction of human embryos.

Turnbull is agnostic about which, if any, procedure is likely to reach the clinic first. One technique may prove more efficient than the other, or may shuttle fewer mutant mitochondria to the donor egg. “We’ve got to be careful that this is not a race,” Turnbull says. Taking the technique beyond the lab would also require a change in the law. Nuclear transfer procedures are banned under the UK Human Fertilisation and Embryology Act, but the government could amend the law for procedures used to treat mitochondrial diseases.

Meanwhile, the Nuffield Council on Bioethics in London has begun an independent review of the procedures. Science writer Geoff Watts, chairman of the working group behind the review, believes that it will inform the government’s decision. It will consider issues such as whether the procedures should be used to conceive only males, who will not pass on any donor mitochondria to their children. The council says that it will deliver a report in the summer.

Braude worries that, outside the United Kingdom, “somebody will be a cowboy” and attempt the procedures without regulatory oversight. Yet government hurdles could prevent the techniques from being adopted quickly elsewhere. In Australia, for example, a government review in 2011 recommended continuing a ban on such techniques. In the United States, the Food and Drug Administration would be responsible for approving them. Such restrictions, combined with the US ban on federal funding of human embryo work, mean that the first clinical trials of nucleus-swapping procedures will almost certainly occur in the United Kingdom.

“We’ve moved to the stage where we think that the preliminary evidence is very supportive,” says Turnbull, “and we think it’s a very good idea that they consider this.”