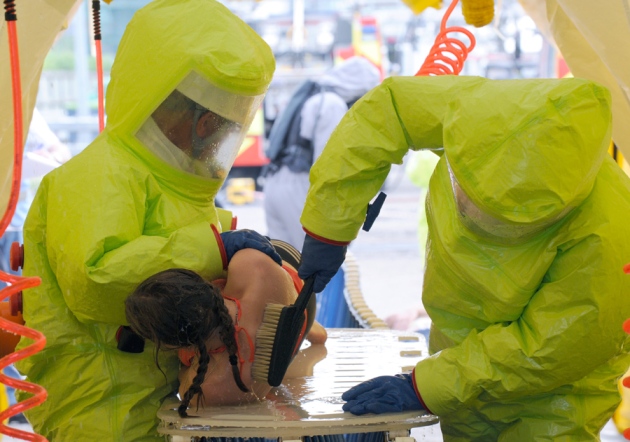 Specialist decontamination teams have until now been the first line of defence against bioterrorist attacks.

A quick wipe-down with a paper towel can help to stem contamination of casualties in the event of a terrorist attack. That research finding is just one of several simple recommendations in the UK government’s plan, now being rolled out, to treat mass civilian casualties in the immediate aftermath of a large-scale chemical, biological or radiological (CBR) attack, or an incident involving hazardous materials.

The Initial Operational Response (IOR) programme, which is based on a raft of European research, largely classified until now, aims to help ambulance staff and other front-line emergency services to quickly deal with victims before specialists arrive. It introduces disrobing and improvised dry decontamination — patting down with paper towels or other readily available absorbent materials, for example — as the default initial response.

“Any decontamination has to be ‘quick and dirty’, to try to increase the chance of survival and to minimize spread of contamination,” says Ola Claesson of the Swedish Defence Research Agency in Stockholm, who took part in the research.

The IOR, a Home Office-led initiative, marks a shift in UK policy on dealing with CBR events, and the research on which it is based has caught the attention of international agencies. Until now, UK plans for large-scale incidents involved waiting for specialized teams to arrive wearing hazmat suits, and bringing portable showering tents and other equipment. But with fewer specialized teams than emergency services, delays would be inevitable — an important factor given that many chemical agents, such as sarin nerve gas, can be fast-acting. The new plan eases this problem by placing the initial response emphasis on those first at the scene.

Nature special: Beyond the bomb — science and the military

The changes stem from the findings of a European programme called ORCHIDS (Optimisation through Research of Chemical Incident Decontamination Systems). Led by the UK Health Protection Agency (HPA), it involved Czech, French and Swedish security-research centres, as well as collaborators in  Australia, Canada, Japan and the United States. A companion UK project, ORCHIDS-2, was carried out by the HPA and by researchers at the University of Hertfordshire in Hatfield and the University of Surrey in Guildford.

The ORCHIDS programmes ran in parallel from 2008 to 2011. Some of their findings have already been published, but much is only now being declassified, explains Robert Chilcott, a toxicologist at the University of Hertfordshire and a lead scientist on both programmes.

The aim was to improve the science base for emergency-response policies to civilian CBR attacks. Much existing research on decontamination following such attacks has been conducted by the military and is geared towards combat situations; it is often not adapted to mass civilian incidents, Chilcott says.

The ORCHIDS research quantified the effects of disrobing and decontamination protocols on the speed and effectiveness of the removal of agents. Various scenarios were tested using in vitro models and animal experiments before being replicated in humans.

The scientists found that clothes could provide significant initial protection, but that it was important to remove them quickly to prevent agents from penetrating through to the skin. They also found that dry decontamination was effective — this is crucial, because sufficient warm soapy water is unlikely to be immediately available. Combined disrobing and improvised decontamination bought precious time, the research found.

The ORCHIDS project also investigated how showers could best be used once they became available. It tested various regimens, and found, for example, that simple measures such as flannel use and vigorous towel-drying greatly improved the removal of agents. Shower­ing for longer than 90 seconds provided little added benefit, a finding that could maximize the rate at which casu­alties are processed.

“Overall, the new IOR establishes the primary need to both disrobe and decontaminate individuals as soon as practically possible using any available method, and is based on experimental evidence,” says Chilcott. Training of emergency services in IOR techniques has already begun.

“It gives us all credibility to go back to  first responders and communities and say that this is scientifically based.”

ORCHIDS data have been shared confidentially with security agencies in the United States and other countries. In 2012, the US Department of Health and Human Services, citing a need for similar research on US responses, awarded Chilcott a US$6-million, two-year grant to apply ORCHIDS methodologies to optimize, for example, the mainstay of the US rapid on-scene response — the ‘ladder pipe’ system. In this, two fire trucks spray low-pressure water to form a decontamination corridor. The research is studying the effectiveness of the ladder-pipe system on clothed individuals.

US guidelines currently recommend that casualties disrobe to at least their underwear, but note that forcing people to undress could make them uncooperative and cause delays. The dilemma highlights the importance of such psychosocial aspects in the design of mass civilian decontamination plans (see ‘Stresses and strains’).

Even the best plans for an emergency response to a civilian attack involving chemical, biological or radiological weapons risk going awry in the chaos of a real-world incident. But taking psychological and social factors into account can help to smooth the process.

Decontamination procedures typically involve steps that can be highly traumatic for casualties, such as being faced with emergency staff dressed in hazmat suits, having to undress and shower in public, or being sprayed by fire hoses. Research has found, for example, that the way in which procedures are communicated is key to alleviating anxieties and fears. Poor communication has been found to heighten fears, causing people to refuse to cooperate — or simply to flee the incident scene.

"Not much thought had been given to psychosocial issues," says Laurie Pearce at the Justice Institute of British Columbia (JIBC), a public-safety and -security school in New Westminster, Canada. In particular, the special needs of vulnerable groups, such as children and the elderly, are often overlooked.

Yet simple measures that take little time, for example distributing leaflets that explain what is happening, can be surprisingly effective, says Pearce, who leads SIMTEC, a JIBC programme of research on how to reduce such psychosocial stresses. Implementing a 'buddy system', in which people are paired up to look after each other, also often results in them putting aside their fears or desire to flee, and focusing on helping their buddy, she adds. Simply providing a bag so that people can keep their mobile phones with them also helps to reduce stress.

Research on the softer aspects highlights the benefits of a ‘real-world’ response. For example, decontamination protocols often suggest that, when showering, parents should get another adult to hold their infant to avoid the child slipping from the parent's arms, notes Pearce. But it turns out not to be that simple. "In our research, no parent was going to have a naked stranger hold on to their naked infant," says Pearce. The workable solution that the researchers finally came up with was to put infants in a small plastic shopping basket.

Robert Gougelet, a researcher in emergency medicine at Dartmouth College in Hanover, New Hampshire, who is familiar with the ORCHIDS work, describes it as “novel and very credible”. He says that he has long advocated the need for a similar initial response phase in the United States. “One of the issues we have is that it’s easier for people just to sit back and say, ‘We are going to wait for the regional teams to arrive three hours later’. We are trying to change that way of thinking,” he adds.

Gougelet feels that having an improved solid science base will help. “It gives us all credibility to go back to the first responders and communities and say that this is scientifically based, this is the credible thing to do, the state of the art, and this is what you should be planning for.”