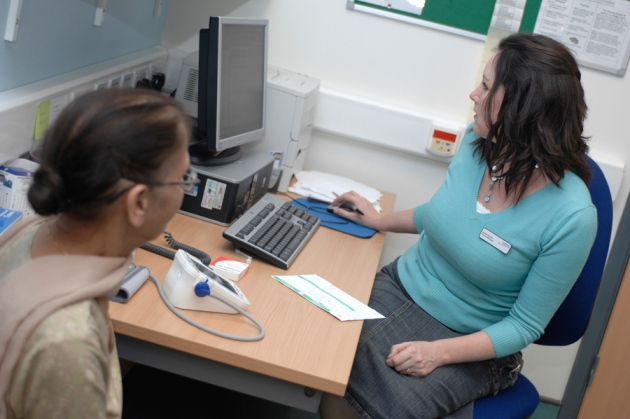 Patients in England are being encouraged by the National Health Service to make their medical records accessible.

In August, posters began appearing in doctor’s practices across England, urging patients to say yes to their medical records being used for scientific research — or, more precisely, not to say no.

The move, now gathering momentum, is part of a campaign by the UK government, alongside major research funders such as the Wellcome Trust in London, to convince a sceptical public to share their health details with researchers, through a system in which patients must expressly opt out. Privacy advocates are encouraging them to do just that.

The government’s plans are part of a shake-up of health data in the National Health Service (NHS) in England, the world’s largest public-health system, that cares for about 53 million people. Following reforms made in April, it will in the coming weeks begin radically changing the way it handles patients’ records. This will involve establishing a central repository to connect hitherto disparate electronic data from general practitioners’ (GP) practices, hospitals and disease registries. 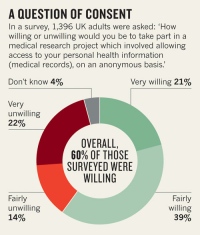 Such linkage, already in place in Scotland and Wales, where the NHS is run separately, will deliver better health care, the government says, while establishing the world’s most comprehensive patient database for research. It could be used to find new uses for existing drugs, and speed up the transfer of research to the clinic.

“The potential crown jewels in the UK are primary-care data that have been electronic for decades and have been coded for decades and have wide population coverage, nearly 100%,” says Harry Hemingway, director of the Farr Health Informatics Research Institute at University College London, which was established this year with funding from the UK Medical Research Council to mine such records. Such an archive would trump those in the United States, and even in Denmark and Sweden, which have had central health databases for years.

The immediate use of the linked data will be to help the NHS apportion resources, but the government is also keen to make patients’ records more useful — and accessible — to researchers in academia and industry. Prime Minister David Cameron has said that every NHS patient should be a research participant. His administration is also hoping that access to patients’ data will lure drug companies back to Britain, and catalyse a health-informatics industry potentially worth billions of pounds.

This autumn, GPs’ records will begin migration to a data centre, where they will be linked with other data, including already-centralized hospital records. Some of this information — stripped of identifying details or fully anonymized — will also be made available to approved researchers through a secure portal.

According to some proponents of the plan, patients have little reason to opt out. “People think their records are being shared much more than they already are,” says Nicola Perrin, head of policy at the Wellcome Trust, the UK’s biggest funder of biomedical research. She worries that the public in England have not been adequately informed about the benefits of records sharing, such as improved health care, nor about measures intended to protect privacy. “I think there is underlying support for it, provided one can explain that there are safeguards, and that it isn’t your most personal secrets that researchers want to get,” she adds (see ‘A question of consent’).

Yet research funders worry that scaremongering in sections of the press could lead to large numbers of people opting out of the scheme, diluting its usefulness to researchers. In response, funders plan to become more vocal in touting the benefits of health-records research, such as very large epidemiological studies showing the effectiveness of smoking bans and the safety of vaccines. “When you explain that all of this research is only possible by using patient records, then people change their minds,” says Janet Valentine, head of public health and ageing at the Medical Research Council, the UK’s publicly funded agency for biomedical research, which spent £760 million (US$1.2 billion) on research last year.

Phil Booth, head of a campaign called medConfidential that opposes the changes, worries that medical research is being used as a patient-friendly cover to collect data for other uses, such as the administration of social-security benefits. If privacy were compromised — an inevitability, Booth says — patients might lose faith in research and the NHS. His organization successfully fought for patients to be able to opt out. “I think research institutions are basically being rather short-sighted in aligning themselves with this initiative,” he says.