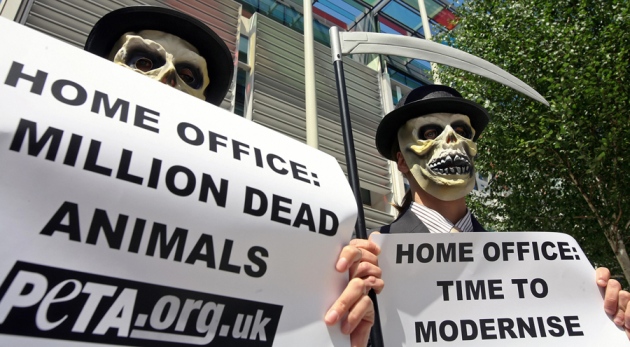 Organizations such as People for the Ethical Treatment of Animals (PETA) have been campaigning for the disclosure of more information on animal research in the United Kingdom.

The government of the United Kingdom wants to jettison rules that prevent it releasing any confidential information it holds about animal research, as part of a continuing push towards openness about such work.

Animal-rights groups have long complained about what they characterise as a “secrecy clause” that prevents details of animal research in the UK being made public. The Home Office collects huge amounts of information such as the type of work done, the people and institutions doing it, and the results of inspections at laboratories. However it is currently prevented from revealing anything potentially considered confidential under ‘section 24’ of the rules governing animal research.

Today the government said that it would like repeal this blanket ban on information disclosure, as it has previously promised, and requested comment on its proposal. In place of section 24, it would like to introduce a new rule prohibiting disclosure only of information relating to “people, places and intellectual property”.

Home Office minister Norman Baker said in the consultation document released today, “To maintain public trust we must be as open and transparent as possible about activities under the regulatory framework.”

If implemented, the new rule would still keep names and locations of animal research out of the public domain — a key concern of many researchers who fear protests or even violent attacks from extremist animal rights protestors. The government is also proposing creating a new criminal offence of 'malicious disclosure' of information about animal research. This appears aimed at preventing attempts by anti-research extremists to ‘out’ researchers online with the aim of encouraging harassment of them or financial damage of their employers, something that has happened in the past.

Dominic Wells is a neuromuscular disease researcher at the Royal Veterinary College in London and one of those working on the forthcoming concordat, or consensus statement, on animal research which will see various organisations lay out how they will be more open about animal work.

“There is no question section 24 is not fit for purpose any longer,” he says. For example, it could prevent the spread of details of best practice among those with licences to do animal research, as the Home Office might not be able to provide a list of all those with licences.

“Everybody is agreed” that removing section 24 is a good thing, says Wells, and the safeguards proposed by the government should ensure the safety of researchers and their intellectual property (IP).

Although anti-animal research groups have also welcomed the move to repeal section 24, the London-based National Anti-Vivisection Society said they feared the potential new malicious disclosure offence could limit their ability to conduct undercover investigations of laboratories, such as the one that led to changes at Imperial College London’s animal labs last year.

In a statement, the society’s Chief Executive Jan Creamer said the clause should be repealed without additional legislation being added. Section 24 is a “‘secrecy clause’ that shrouds animal experiments from public and scientific scrutiny” she said.

Chris Magee, a spokesman for the London-based Understanding Animal Research group, which campaigns in support of animal research, says the sector in general is already moving towards being more open about what work is done. However, he says such changes have to be carefully implemented, especially so that people are not able to work out confidential details. For example, even when a researcher's name and location are redacted, the rest of the information released on the type of work could still be enough to track it down to one group or individual.

“We’ve always been of the position that as much information as possible should be made available, whilst ensuring the safety of staff and the protection of IP,” says Magee.

The government consultation is open till 13 June.