UK scientists worried about how Brexit will affect their funding received a boost this week, when the country's three main national parties pledged long-term targets to raise research spending. The announcements came in party manifestos unveiled ahead of national elections in June.

It's “a surprise and a delight” to see the promises, says Graeme Reid, a science-policy researcher at University College London. None of the manifestos makes detailed financial commitments to science. But each sets targets to substantially increase spending on research and development (R&D) as a proportion of the country’s gross domestic product (GDP) — an indicator often taken as a measure of a nation’s commitment to research.

The United Kingdom spends 1.7% of its GDP on research, less than the European Union’s 2% average and well behind many other developed nations (see 'Research spending gap'). The governing Conservative Party — which polls suggest should sweep the 8 June election — has promised to raise that figure to 2.4% within 10 years, and to aim for a longer-term goal of 3%. The opposing Labour Party says it wants to hit 3% by 2030, and the Liberal Democrats — traditionally the country’s third party — promise a “long-term goal” to “double innovation and research spending across the economy”. 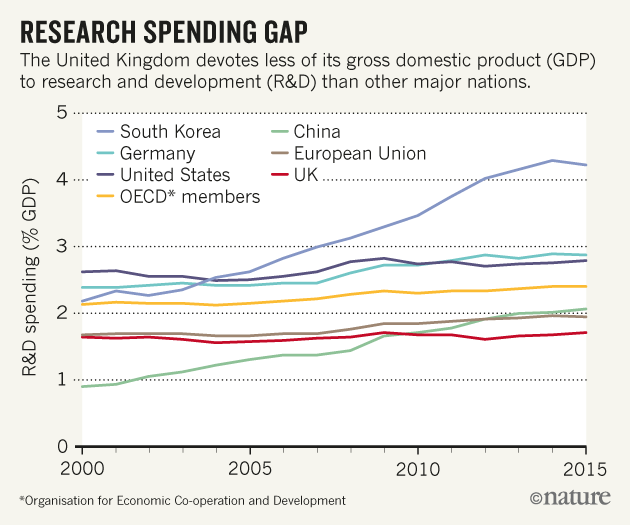 The pledges are aspirations that will take more than one term of Parliament to deliver, Reid notes. And a government by itself won’t be able to achieve the targets, because they rely on business R&D investment rising in concert with public funding. But if the parties stick to their pledges, there should be billions of pounds more for British scientists.

The London-based Campaign for Science and Engineering (CaSE) calculates that to reach the 3% target, the government would have to commit an extra £6 billion (US$8 billion) per year to research funding, on top of its current £6 billion and an existing commitment to raise annual funds by £2 billion by 2020. That calculation assumes that for every pound spent by government on R&D, businesses will chip in twice as much — a 2:1 split that’s typical internationally, CaSE says.

“This is a significant and welcome commitment," says James Wilsdon, a research-policy specialist at the University of Sheffield, UK. “It’s 13 years since we last heard such an ambitious GDP-linked target for R&D spending from a party of government.” In 2004, the then-Labour government aimed for R&D funding to reach 2.5% of GDP by 2014, he notes, but the pledge was derailed by the financial crisis. A coalition of the Liberal Democrats and Conservatives that governed from 2010 to 2015 avoided setting a long-term goal.

Researchers have often called for a 3% spending target. As far back as 2000, the European Union set itself the aim of raising its R&D funding to that level, but it is still nowhere near. Reid says there is not a huge amount of evidence on the optimum level of research spending, but what there is suggests that around 2.5% of GDP is best. The United Kingdom is far beneath that, so a political commitment to increase R&D spending is more important than fretting about which level to reach, he says.

Not everyone thinks that an R&D spending measure is a useful target. William Lazonick, an economicist at the University of Massachusetts Lowell, says that a national overall R&D target ignores the fact that research spending is disproportionately concentrated within a few, high-spending sectors, such as the pharmaceutical industry. A 3% target is “much too general”, he says, and does not help assess spending in research-intensive sectors. And spending on R&D does not necessarily translate into economic productivity gains, he notes.