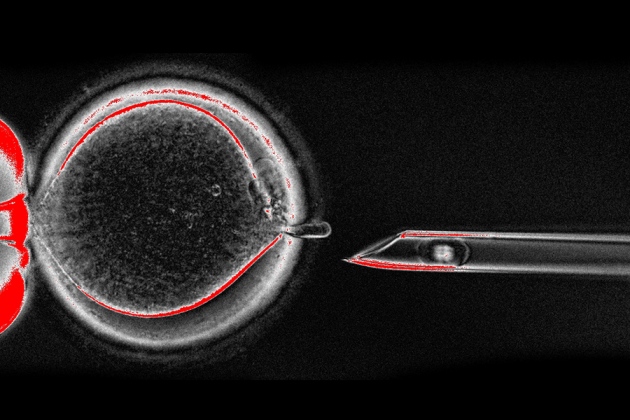 A pipette pulls out the nuclear genetic material from an unfertilized egg — a step in mitochondrial-replacement therapy.

The United Kingdom may soon become the first country to explicitly permit the birth of children from embryos modified to contain three people’s DNA. At the same time, new research backs up concerns that such a treatment — which aims to erase diseases transmitted by the DNA found in cellular structures called mitochondria — may not always be 100% effective.

Scientists advising the UK Human Fertilisation and Embryology Authority (HFEA) said on 30 November that, after two decades of research, the therapy is ready for limited clinical testing. It exchanges a mother's faulty mitochondria for healthy ones from another woman’s egg. The result: a ‘three-parent’ baby with DNA from its father, mother and a third donor.

The HFEA will decide whether to allow clinical trials of the therapy at a meeting on 15 December. If it does, the first procedures, approved on a patient-by-patient basis, could occur as soon as March or April 2017, a spokesperson says.

“We’ll be ready, I hope, to press the button if we get the green light,” says Mary Herbert, a reproductive biologist who is part of a team at Newcastle University, UK, seeking to offer the treatment to women.

The UK government legalized mitochondrial-replacement therapy in 2015, but the HFEA, which was given the power to regulate the technique, had asked for more research before allowing any clinic to trial it. Fertility doctors said this year that they had already performed the procedure in countries such as Mexico and Ukraine, which do not have laws preventing it. That makes approval in the United Kingdom all the more urgent, some researchers say.

Dieter Egli, a stem-cell scientist at the New York Stem Cell Foundation who has studied mitochondrial-replacement therapies, thinks that it is very important to allow the therapies to go forward in UK clinics. He worries that people will increasingly seek the procedures on their own. “Maybe it’s not the best choice, but they will go elsewhere, even if it means greater risk, less oversight and less expertise. I think we can’t blame them for that.”

Studies testing the therapy in human eggs have suggested that it might not always prevent mitochondrial disease. And research published today by a group led by mitochondrial geneticist Shoukhrat Mitalipov, at Oregon Health & Science University in Portland further supports that concern1.

“It’s not perfect. There’s this chance of something going wrong”

In the latest research, published in Nature, a team led by Mitalipov performed the procedure with eggs from four women carrying mitochondrial mutations that had caused diseases in their families (and in some cases in their children), and eggs donated by healthy women. The resulting embryos were all virtually free of carry-over mitochondria, suggesting that the procedures had worked. But embryonic-stem-cell lines cultured from 3 of these 15 embryos regained the mother’s original set of mitochondria.

In other experiments, Mitalipov’s team simulated development by making brain, heart and other cells from stem cells derived from the new embryos. In some cases, the carry-over mitochondria came roaring back. If the same thing happens when an embryo is developing, it means that a child could retain some mutant mitochondria, Mitalipov says — and if they rose to high enough quantities, they could cause disease.

“The question will need to be asked: what do we need to do to avoid that,” says Egli.

Here scientists disagree. Mitalipov’s study hints that specific genetic differences between mitochondria could explain why some replicate faster than others. Choosing egg donors and patients with otherwise similar mitochondrial DNA (or haplotypes) could reduce the chances of mutant mitochondria out-competing healthy counterparts in the cells of a developing child, says Iain Johnston, a biomathematician at the University of Birmingham, UK, who studies mitochondrial inheritance. “I would be more comfortable if these therapies were implemented with haplotype matching.”

But Herbert is not convinced that Mitalipov’s explanation is correct and says that it might be difficult to find matching donors. “You’re setting up an arms race between the two mitochondrial genotypes and keeping your fingers crossed. I think a better use of time and money would be to redouble our efforts to get the carry-over as close to zero as we possibly can,” she says, an area of research her team is working on.

The advisory report suggests that haplotype matching should be considered “as a precautionary step in donor selection”, but does not recommend it be mandatory. “It’s not perfect. There’s this chance of something going wrong,” says Robin Lovell-Badge, a developmental biologist at the Francis Crick Institute in London who was part of the HFEA panel. People considering the treatments, he adds, “must understand it’s impossible to ensure total safety until clinical trials have taken place”.

In September, John Zhang, a fertility doctor at New Hope Fertility Center in New York City, said that he had administered mitochondrial replacement therapy in Mexico to prevent the inheritance of a disease called Leigh syndrome - and that a baby boy had been conceived from the treatment. Zhang shared some of his team’s unpublished data with the HFEA panel. So far, the child seems healthy. In some of his tissues, the mutant mitochondria are undetectable, but in others, they are present at levels of up to 9.2%, according to the HFEA report. Zhang says that a paper describing the work was rejected this month by the New England Journal of Medicine, but he hopes to publish the data soon. Researchers say that they have also tried the therapy in Ukraine, but details have not been published.

“The more we hold off, patients will seek treatments elsewhere,” says Mitalipov. He hopes that the techniques can also be tested in the United States, where the Food and Drug Administration would have to approve any use. “The whole idea of conducting it in the UK and US is that we do it in a few clinics under strict oversight as a clinical trial, so we can evaluate these clinical outcomes."